For Stephen O’Dell, the founder of specialist resort design firm SODA Thailand, the secret to memorable work is in letting the innate character of each project shine through

As high-end resorts and luxury private residences continue to proliferate across Asia-Pacific, designers must work harder than ever to create innovative spaces that stand out from the crowd. Gone are the days when travellers and investors around the region sought out generic signifiers of style. Instead, in this hyper-social media-conscious age, eye-popping Instagrammable experiences that create a sense of place are increasingly essential.

Few design firms in Southeast Asia have excelled at crafting these so-called “wow” moments in the way that SODA Thailand has. The trendsetting company has lent its signature head-turning touch to brands such as W Hotels and Sofitel SO, both of which are renowned for properties that make a visual splash. Yet founder Stephen O’Dell views the creation of these aesthetic statements to be less about artifice and more about embracing the surroundings of each specific project.

“For me, design in a big sense is about discovering,” O’Dell says. “You peel away the layers, you chip away like a sculptor in stone and you discover what’s already there. I think this is more from an architecture sense as our hotels in resort locations are in special locations.”

Just as Michelangelo’s chiselled Prisoners appeared to emerge organically from solid rock, O’Dell sees his work as a matter of unearthing the magic that was present in a site all along. This outlook is part of why no two projects by SODA Thailand are exactly alike. When successfully executed, these designs merge with their surrounding environment as though they always belonged there.

“I like to think that our work is seamlessly rooted to the site. I like it to look as if it’s always been there as if it’s a part of a landscape and not in opposition to it,” O’Dell says. “I often look to contemporary artists like Richard Serra and the way that they’ve taken art out of the gallery and into the landscape. We’re responding to the landscape not just in an artistic way, but in a memorable way.”

For me, design in a big sense is about discovering. You peel away the layers, you chip away like a sculptor in stone and you discover what’s already there. I think this is more from an architecture sense as our hotels are in special locations

Before O’Dell begins designing a project, he spends considerable time investigating the specific site. He examines how the light moves over the landscape over the day, how the waterways flow, and what vegetation flourishes in the climate without excessive use of harmful pesticides and fertilisers.

“Every project has its own set of inspirations and challenges. If there was any overriding philosophy, it’s that we try to respond to a place,” O’Dell says. “When I walk a site, it’s so important to spend as much time as possible on-site from the early morning hours to the evening hours to see what the site has to offer. We look around for these moments.”

At the Hilton Yala, a forthcoming project that O’Dell believes captures his design ethos, a close examination of the site led to some truly jaw-stopping revelations. Guests at the resort will be able to gaze upon the charismatic megafauna of Sri Lanka’s Yala National Park at a manmade watering hole.

“Did we create this ‘wow’ moment? No, but we created a bio pond for the elephants to come to drink and we worked with a local naturalist to select the right trees for them,” O’Dell says. “We were creating the stage for crocodiles and wild boar. There’s even a leopard rock and if you’re very lucky, you might even see a leopard. We responded to what we were given.”

Whether it’s the stars in the velvet-black sky over the Maldives or leopards lounging by a pool, these natural elements imbue the manmade designs with a hint of magic. When he comes across such inherently cinematic features, he does his best to use clever architectural design to set them in the spotlight.

“Like a film director or a theatre director, we set the stage for the guest to discover these moments for themselves,” O’Dell says. “We don’t create an object. We create a space and a sense of reception for discovery. The joy of our process is finding these moments ourselves.”

That sense of joy is one that lingers with guests long after their departure. Experiential travel is increasingly what drives both Millennial and Gen-Z consumers around the world. A sense of authenticity, coupled with that crucial element of surprise and delight, is what makes guests long to return. 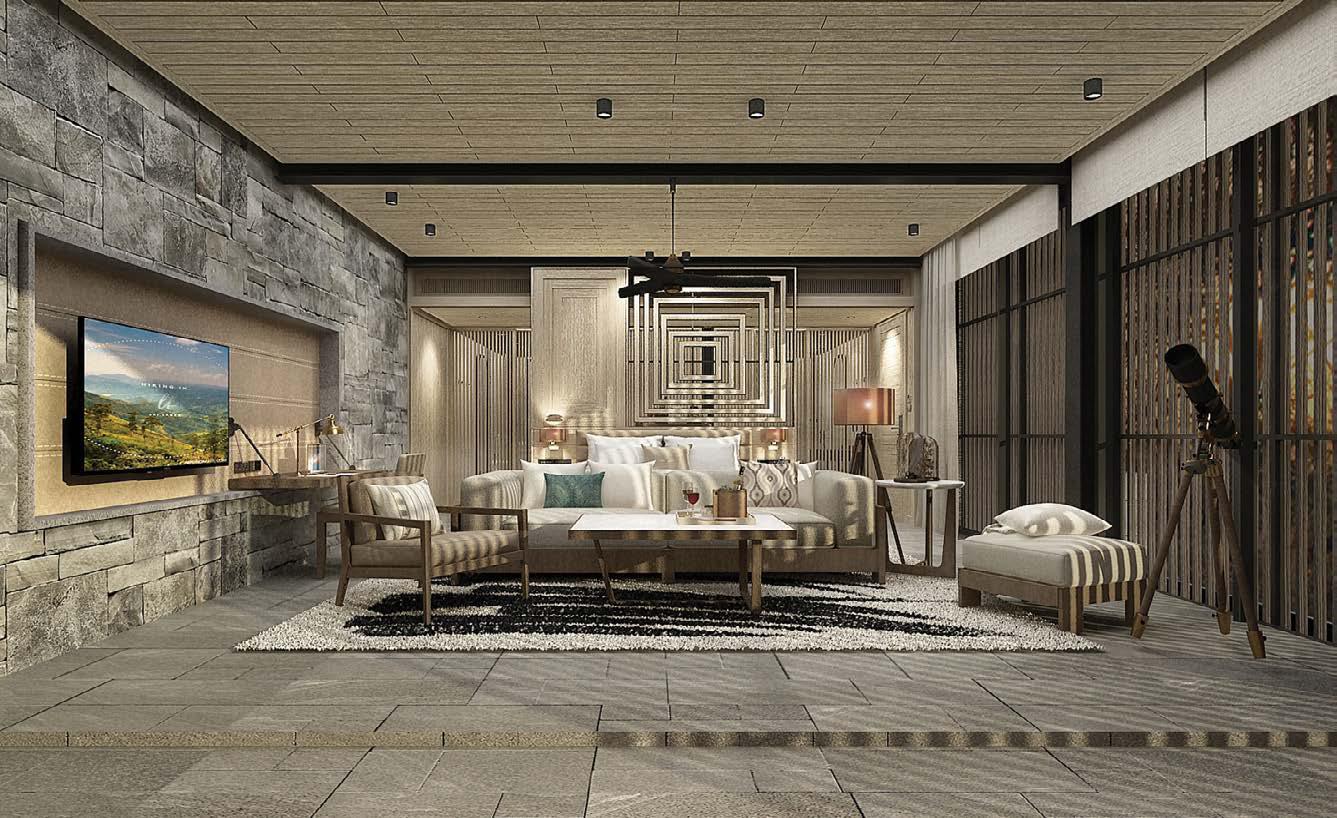 “The site was man-made in terms of the boundaries, but we had to all but erase the boundaries,” O’Dell says. Instead of relying on artificially imposed distinctions, SODA Thailand looked to the dramatic rock formations and the paths worn by generations of elephants. “We were the architect, interior designer and landscape designer for Hilton. Quite frankly, that’s a dream, because the interior and exterior can flow seamlessly into one another. You can create the entire design environment.” Once completed, the result will be all the more striking for its comprehensive integration into the landscape. “When people arrive, we take them through an opening through these canyon walls. It’s like Jurassic Park.” 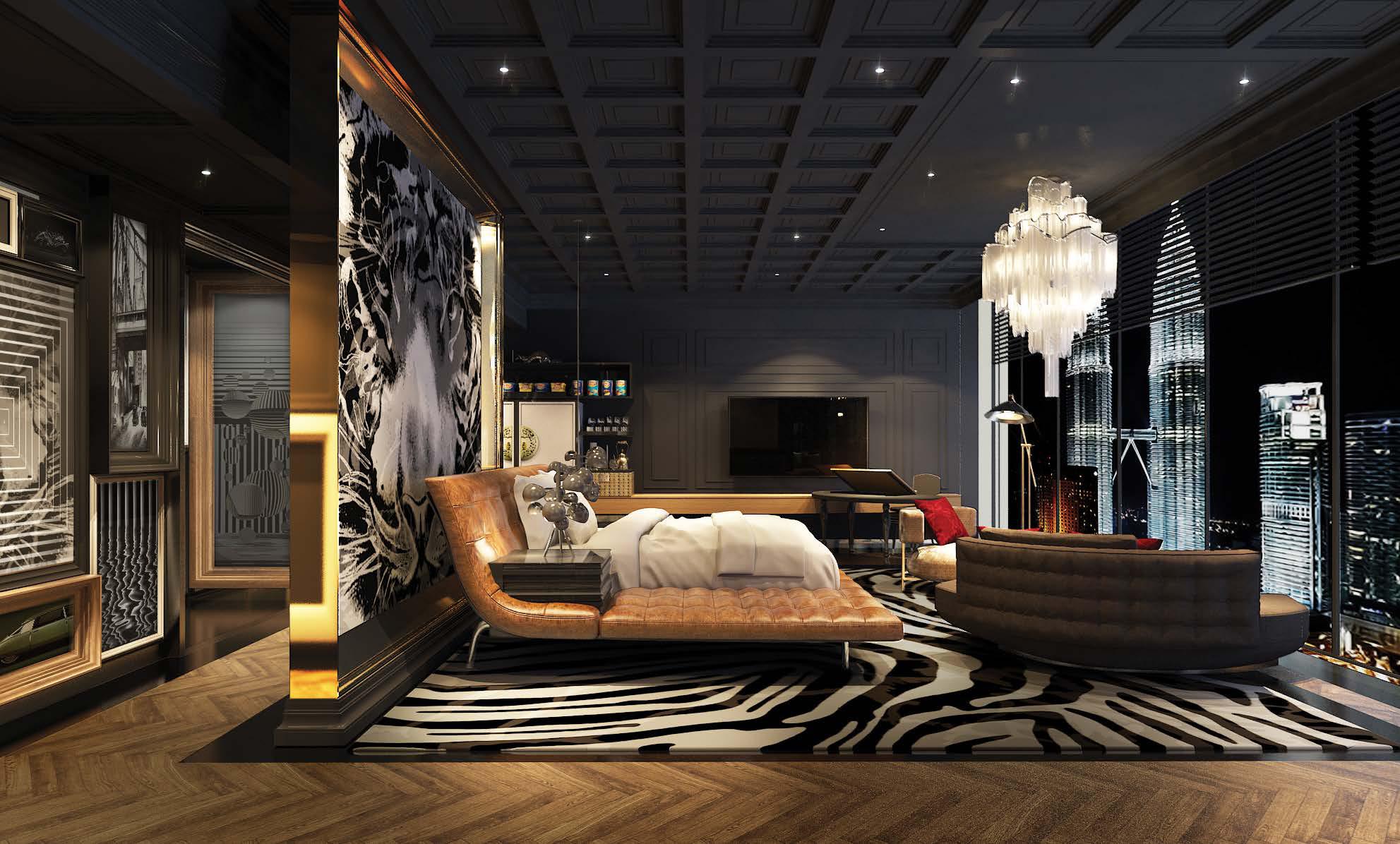 “[Sofitel SO] is a fun brand and it’s looking to create a little bit of a smile,” says O’Dell. “You look at something and it’s masculine but feminine. There’s a playfulness and it wants you to have that element of surprise.” To capture that playfulness while imbuing the property with a sense of place, SODA Thailand turned to Kuala Lumpur’s multicultural heritage. “We chose to blend Malay culture, Indian culture, Chinese culture, and French culture. So we wanted to express the melting pot of cultures that are there in KL,” he says. Rooms feature subtle nods to the various design aesthetics, including French moulding and Art Deco-inspired touches as well as mini-bars fashioned after Chinese lacquer cabinets and accent throw pillows in vivid hues inspired by Indian spices.

More: SODA Thailand takes on resort and hotel designs that stand the test of time 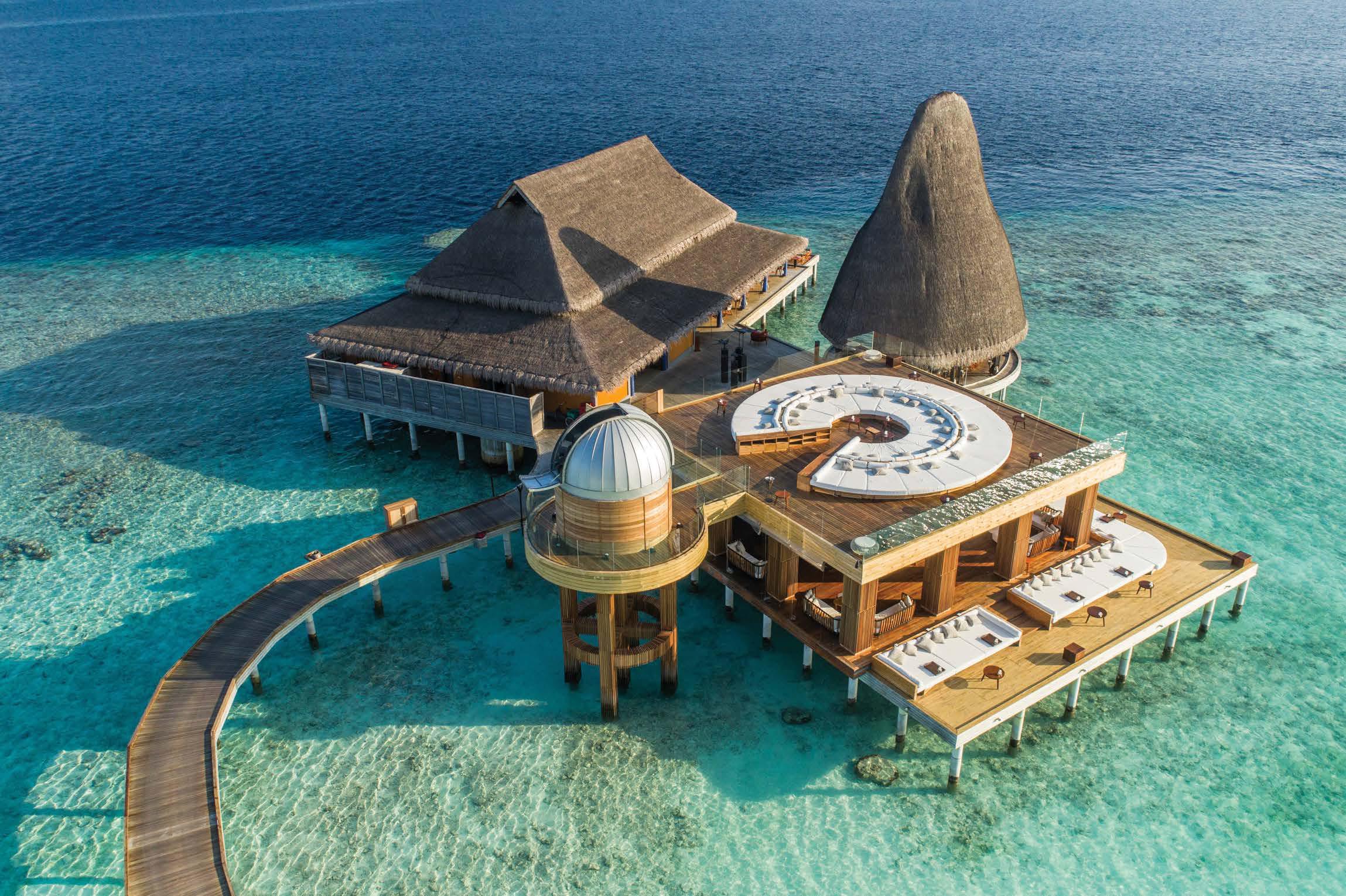 “Designers can create something out of the blue, but I think a really good designer can peel away the static,” O’Dell says. In this case, SODA Thailand helped draw attention to the stunning Maldivian night sky by building a series of two circular walkways around the resort’s telescope. “There’s an inner circle where the resident astronomer talks to you, and an outer circle where you can just enjoy the stars. From a functional standpoint, it was very elegant,” he says. “You sit around in a circle almost like around a campfire and then you walk across the bridge and see the stars. It’s very powerful, it’s very celestial, it’s very symbolic, and it’s also quite functional.” “On the site for this resort, there were epic boulders and hundred-year-old trees,” says O’Dell. While many architects would have viewed these immovable natural landmarks as barriers, he saw them as an opportunity to express the island’s dynamic terrain throughout the resort. As guests enter, their eyes sweep over the landscape. “Our lobby building isn’t just the classic lobby with steps going down to the beach. It’s a journey,” he says. “You arrive and we take people out to a point that looks out over the site, then you take a left and go down a series of cascading steps to courtyards and a pool.”

More: A glimpse inside one of Malaysia’s tallest buildings 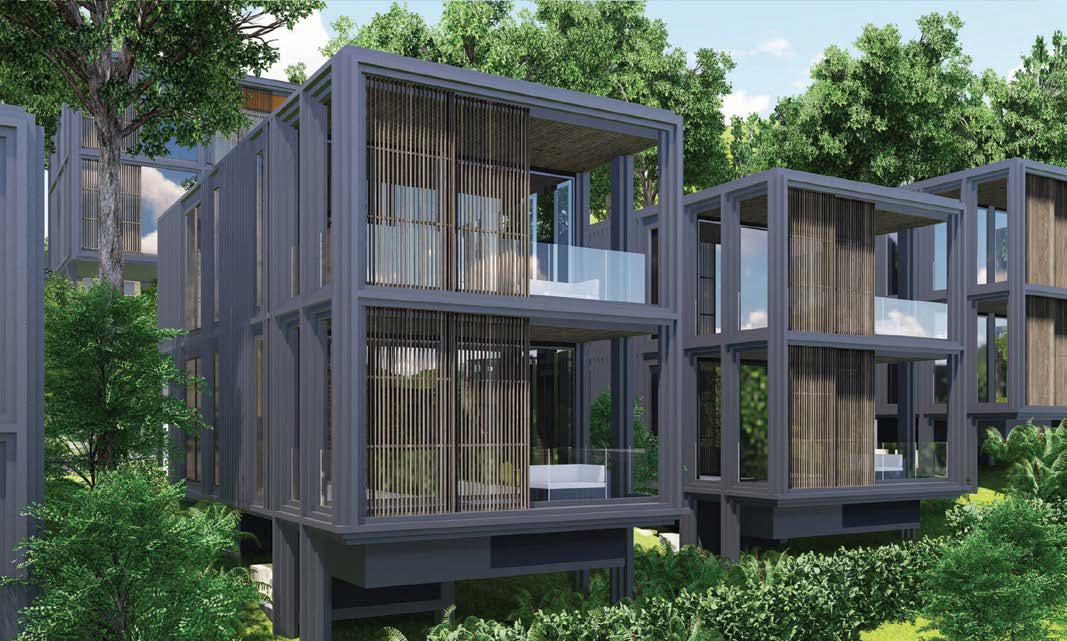 When it comes to private residences and luxury condominiums, a view is everything. Since there was no way to offer an ocean vista for every abode here, O’Dell and his colleagues knew that they needed to craft an equally appealing visual panorama for residents. “In this case, we did need to create internal spaces within the site and very articulate landscaping, with pools, water, tree planting, sightlines,” he says. “When it’s done, as you make your way around this site, it’s going to keep changing. There’s going to be this infinite number of views with the mountain or the sea as a backdrop.” 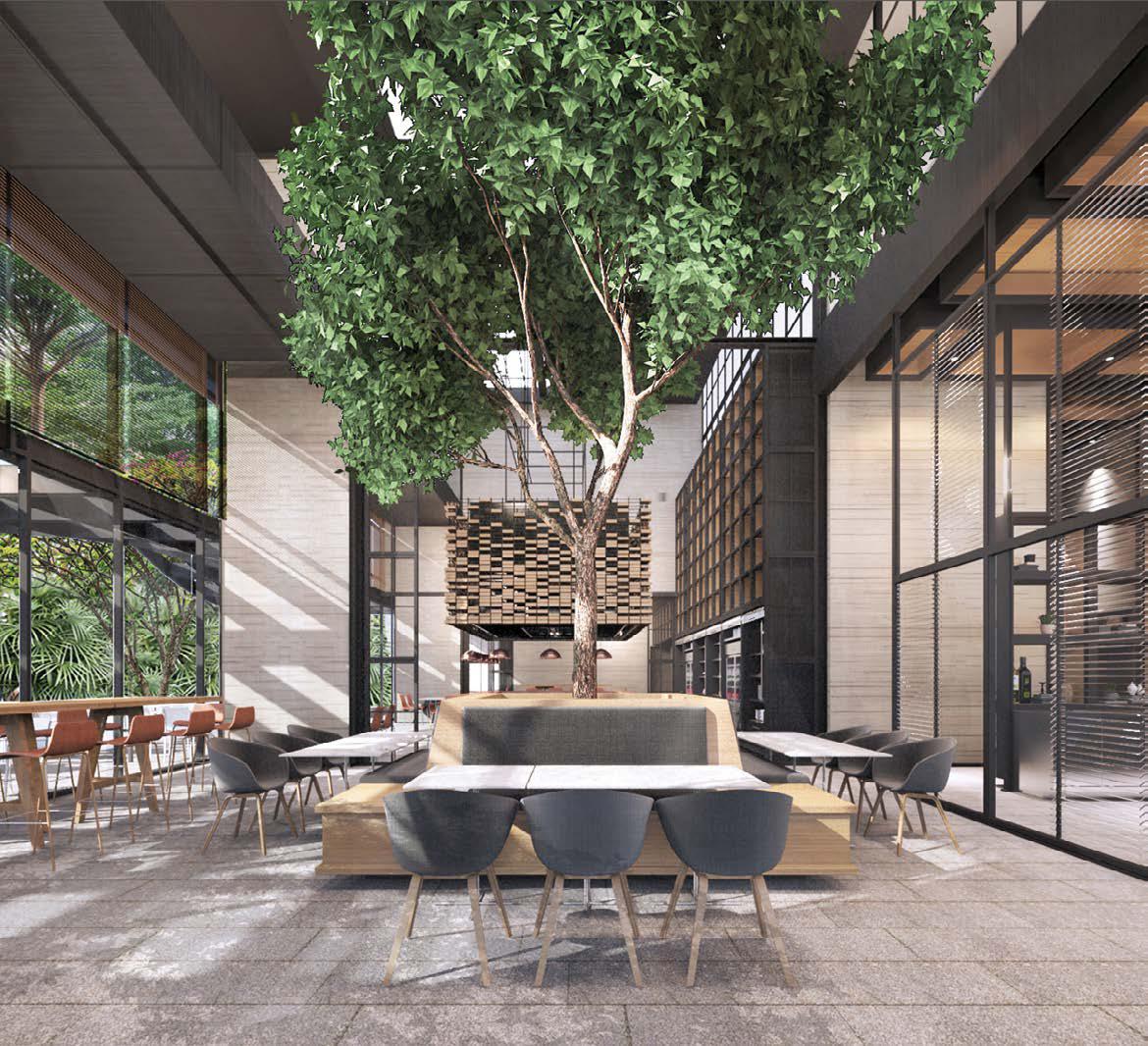 “Since the hotel is in a vibrant neighbourhood, we wanted to engage the street,” says O’Dell. “We were able to extend the lobby and the dining area out to the street with terraces. I like to think you’re not checking into a hotel, you’re checking into a restaurant and bar.” That melding of interior and exterior extends to the high-ceilinged lobby, which features a living tree that embodies Phnom Penh’s growing eco-awareness. Graphics and original wall art by local artists give each of the rooms a distinctive flair. “We tapped into the local culture. What’s interesting about the design is it’s a very loose fit. It’s very comfortable and it is localised by the artworks and the materials.”

This original version of this article appeared in Issue No. 164 of PropertyGuru Property Report Magazine