Standing proud next to the iconic Petronas Towers, Four Seasons Place Kuala Lumpur has overcome numerous challenges to stake its claim as one of Malaysia’s most desirable — and technologically savvy — addresses 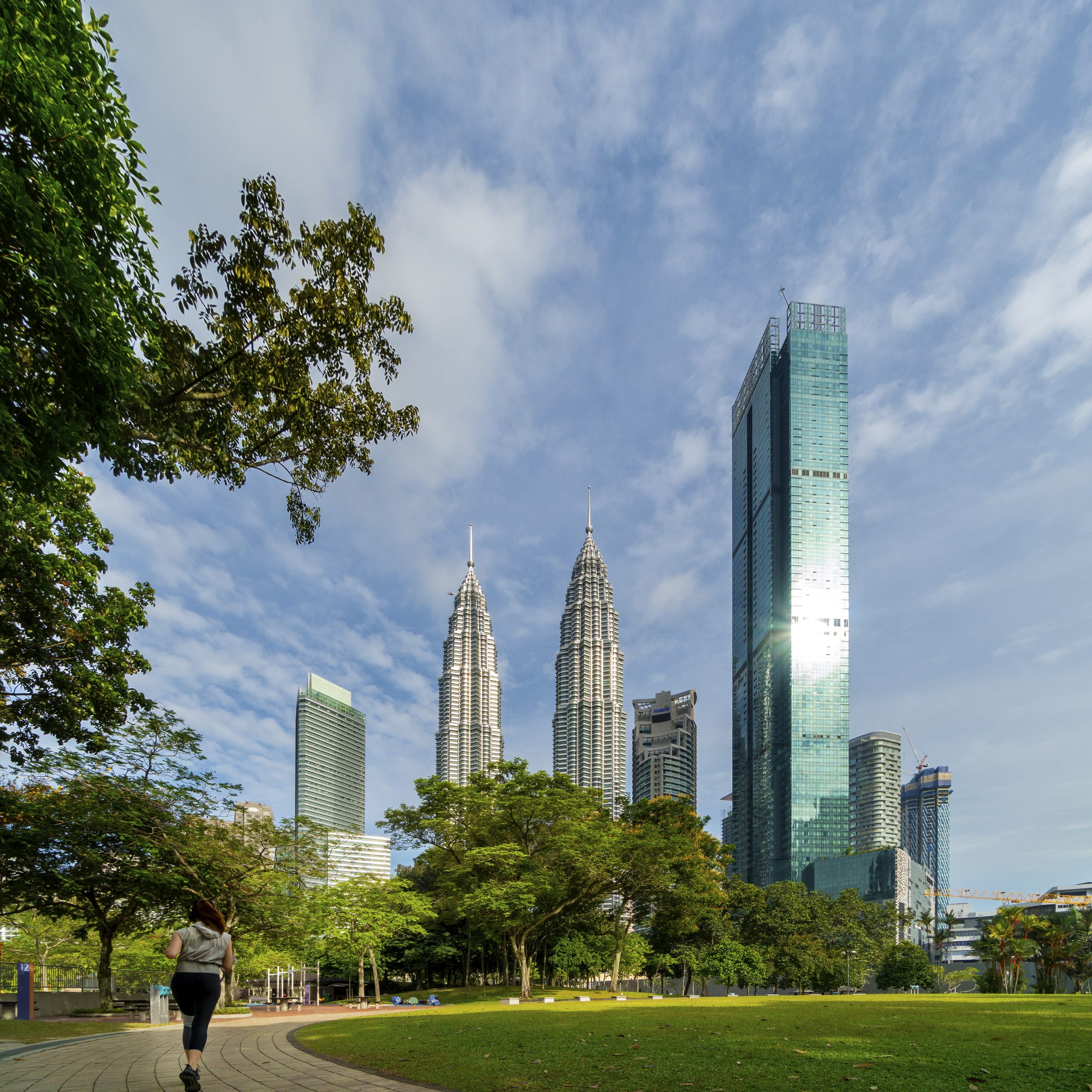 Erecting a lofty skyscraper beside Malaysia’s most iconic structures is one gutsy move. But not only has the Four Seasons Place Kuala Lumpur dared to stand close to the Petronas Towers; it approximates their stature: at 343 metres high, the 65-storey supertall topped out three years ago as the country’s second-highest building.

The project had been fraught with challenges since 2003 when developer Venus Assets Sdn. Bhd, led by hotelier Ong Beng Seng, acquired the 106,423-sq ft site owned by billionaire Khoo Teck Puat for MYR90m (USD21m) in a part of KL dubbed “the Golden Triangle” due to its clout as an entertainment and economic enclave.

In 2008, a mere year after the developer got City Hall’s approval to build the country’s first Four Seasons hotel, the MYR2.2bn project stalled due to the global financial crisis.

“In reviving this, the client decided the project would be ‘homegrown’ – fully designed and consulted by main local consultants along with international specialist consultants,” says Yew Bu Hwa, principal director of NRY Architects. “The project started with piling works and construction of diaphragm walls based on the original design.”

By 2012, the project footprint had significantly shrunk. At only 2.4 acres, and with planning authority requirements such as road surrender and setbacks, the design team worked on minimal footprint.

Being within KL’s most sought-after address, land cost was understandably high. “Maximising the site potential was among the main requirements, resulting in the higher plot ratio and floor plates, adding to the building heights and making it one of the tallest buildings in the world,” says Yew.

From the outset, hotel operator Four Seasons has been a fastidious influence, providing architects a brief based on the brand’s Design Standards, which governs everything from furniture, fixtures, and equipment to mechanical and electrical systems. “They provided inputs in the space planning, interior, facilities, technical requirements, and back of the house. They worked closely with us to ensure all guidelines and requirements were fulfilled,” says Yew, adding his firm had to “meet and juggle between the hotel operator’s design requirements and the owner’s needs, which in itself was a mammoth task.”

Architecture studio AB Concept is behind most of the interiors in the building’s F&B outlets — and its participation is paying dividends. Yun House, the hotel’s Chinese restaurant, is now among the city’s most photographed spots, while Bar Trigona — with design inspired by the trigona, a native, stingless bee — has been laurelled Asia’s most sustainable bar for two years straight.

“General hotel standards aside, the Four Seasons puts great emphasis on the local contexts. These are applied in the interior designs of the bar, Chinese restaurant, and all-day dining, as Malaysian cultural elements are embedded in the design,” says Yew.

While the interior design is steeped in oriental flavour, the building itself pays tribute to modernist architecture. “The vertical and straight lines are the reminisced elements of the once-popular modernist architecture in western cities,” explains Yew. “The rectangular and turquoise outlook of the building reflects that style, with a blend of contemporary materials and detailing.”

When China Railway Construction Corporation (CRCC) began construction in February 2013, the site’s limited size proved a hurdle. While CRCC was able to construct a floor every four days, a record rate, “it was not easy in the beginning as there were a lot of challenges and obstacles,” the company’s chief economist Zhao Jinhua told local press.

NRY Architects also had to deal with different architectural packages involving more than 20 nominated sub-contractors, a volume uncommon among projects in Malaysia. “We had to mitigate and resolve these challenges carefully to ensure the project was completed by the stipulated timeline,” says Yew.

The vertical and straight lines are the reminisced elements of the once-popular modernist architecture in western cities. The rectangular and turquoise outlook of the building reflects that style

A tower of such altitude, let alone proximity to a national icon, was bound to have its share of critics. The project would ruin sightlines for tourists “who want to have a nice view and take photos of the twin towers,” Tan Kok Liang of the Malaysian Association of Tour and Travel Agents was quoted as saying. But, according to Yew, “the intention was not to compete with the Petronas Twin Towers, but to complement the surrounding Kuala Lumpur City Centre (KLCC) area.”

“The view was the primary consideration for planning this development, which was achieved through the orientation of the podium and by positioning the tower to respond to the view. Most units were arranged to have the expansive view towards the park and the twin towers,” says Yew.

Four Seasons Place Kuala Lumpur opened its doors in July 2018. Technology has been instrumental in facilitating building maintenance and hotel operations since. For instance, a German-made telescopic arm gondola atop the lift core on the topmost floor eases aerial work for glass cleaning crews.

The building has also gone above and beyond in its fire prevention efforts. In the retail podium and hotel ballrooms, a performance-based extraction system quickly sucks out smoke from fires while fire roller shutters automatically activate during incidents. A fire refuge floor is available.

From the ground floor, guests are taken to the hotel lobby on Level 6B, located next to The Lounge, an English afternoon tea spot inspired by Malaysian inner courtyards. The hotel rooms go up to the 18th level, followed by the serviced apartments until the 21st.

Malaysia continues to churn out skyscrapers. The Exchange 106 building, which finally supplanted the Petronas as Malaysia’s tallest last year, is expected to cede its title to the 635-metre-tall Merdeka 118 development in 2021.

Four Seasons Place Kuala Lumpur remains among the tallest hotel buildings on earth. Housing some of the city’s most photogenic, experiential spots, the building is long past skyline watchers’ pissing matches though.

“The distinguished brand name of Four Seasons and its primary location in the KLCC district strike a chord in me,” says Yew. “Its strategic location, along with its convenience and permeability, makes the Four Seasons Place an apt architectural endeavour we have ventured in.”

This article originally appeared in Issue No. 161 of PropertyGuru Property Report Magazine