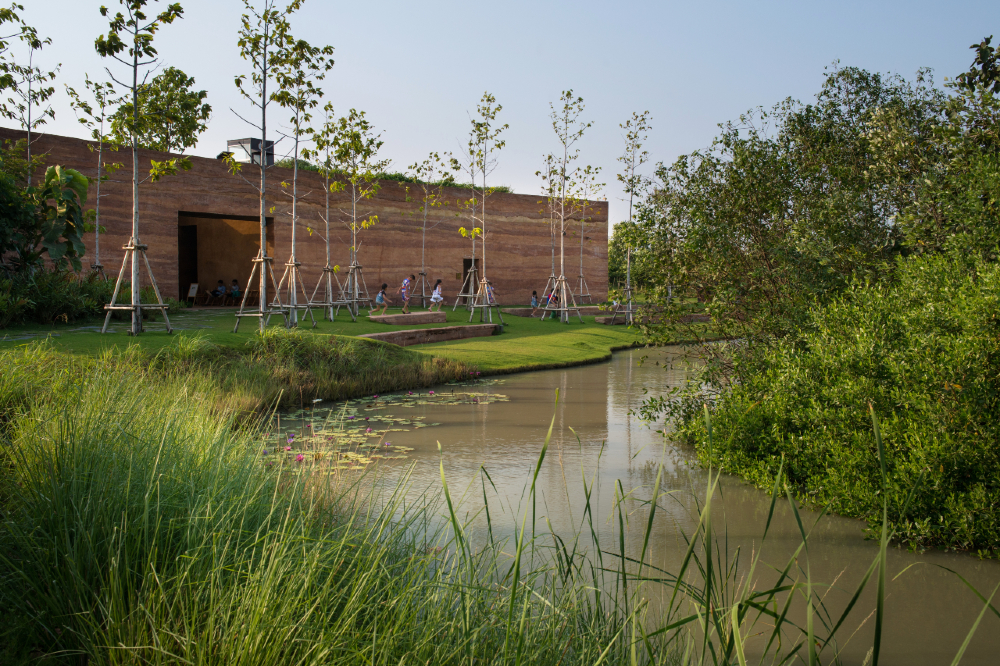 For decades, the term “landscape architecture” was all but synonymous in Southeast Asia with reining in nature’s more unruly urges. It entailed subduing biodiverse meadows into monocultural lawns, crafting fantastical landscapes for resorts with flora from all over the globe. Whilst some may find these aesthetically pleasing, maintaining the veneer of perfection involved constant irrigation, as well as armies of gardeners endlessly bombarding ‘exotic’ plants with herbicides and pesticides to keep them alive in an alien climate. The results often feel eerily placeless, as though they could be anywhere yet belong nowhere at the same time.

“In the past, we tended to look at landscapes in a static way,” says Tawatchai Kobkaikit, the founder of TK Studio in Bangkok. “Plants that remained beautiful regardless of the seasons. Lawns that must be manicured.”

Such ideals of unchanging beauty were the norm when Tawatchai went to the United States, first to study, then to practice landscape architecture. It wasn’t until years later that he began to challenge convention and, in doing so, take his practice towards a far more dynamic direction.

During his time with LAB (Landscape Architects of Bangkok), Tawatchai brought to life The Metro-Forest Project—a radically different notion of what a manmade landscape should be. Located not far from Suvarnabhumi International Airport, the lush two-hectare outdoor exhibit space is a study in ecological regeneration.

Rather than bend the site to the client’s wishes, Tawatchai carefully studied its topography and engineered a comprehensive, symbiotic ecosystem that would thrive under these specific conditions.

“We had the idea of a landscape that always changes and always responds to its surroundings,” Tawatchai says. “Because all the plants we introduced were based on the site’s topography, they were able to flourish without as much irrigation. We selected plants with the idea of creating an integrated ecosystem, rather than simply because they are beautiful.”

Creating miniature ecosystems that work in harmony with their surroundings makes pragmatic sense. With climate change concerns increasing in recent years, more and more architects are pivoting to incorporate sustainable design into resorts, condominiums, and private residences. Yet even as top firms have turned to passive cooling to reduce the carbon footprint of their buildings, less attention has been paid to creating green spaces that are actually green.

An immaculate lawn takes a hefty toll on the environment in order to maintain its homogenous, emerald appearance. In contrast, thoughtfully crafted landscapes like The Metro-Forest Project, while not necessarily a natural one, are truly eco-friendly. Not only are they more resistant to flooding and capable of surviving droughts; they’re overall gentler on the planet they inhabit.

“We’re interested in making our projects sustainable—not through high-tech gimmicks, but rather through comprehensive solutions,” Tawatchai says. “In many ways, it’s the moral equivalent of passive design for landscapes. By grouping plants together based on their needs and water consumption, we create a kind of microclimate. With this idea, you need less overall water, less workers to prune and maintain the landscape, and less energy.”

Aesthetics may not be the primary driving force behind Tawatchai’s arboreal selections, but The Metro-Forest Project is nonetheless striking, lush, and intriguing to behold. Like a Japanese Zen garden, it changes to reflect the seasons and the rainfall. Unlike a pesticide-sprayed garden, it provides a welcoming habitat for brilliantly hued birds and insects.

“Traditionally, the goal of landscape design was to create something beautiful and useful for humans. We never thought of the birds, the insects, or even the plants themselves,” says Tawatchai. “After working on this project, we thought, maybe it doesn’t need to just be good for us. Native species have been living in Thailand for a long, long time. If we don’t dwell on exotic plants and exotic ideas, maybe they will take less effort to maintain and live longer.”

Ultimately, Tawatchai hopes to redefine what we find appealing in a landscape. To him, a resilient, healthy ecosystem perfectly adapted to its topography outshines a bunch of rose bushes wilting under the tropical sun. There can be beauty in change, in slight unpredictability, and in the acknowledgment that humans are not the only organisms to inhabit a landscape.

Tawatchai’s dream of coexisting with nature rather than simply controlling it might have seemed strange in the past, but today these ideas are taking root. Already, one of Bangkok’s most ambitious new shopping centres is an open-air space teeming with vegetation. The star of one of Thailand’s largest private real estate developments is not the five-star resort and villas, but the vibrant forest that surrounds them. Like the Metro-Forest, the landscapes of our brighter, greener future may be those that exist in perfect balance with mankind. 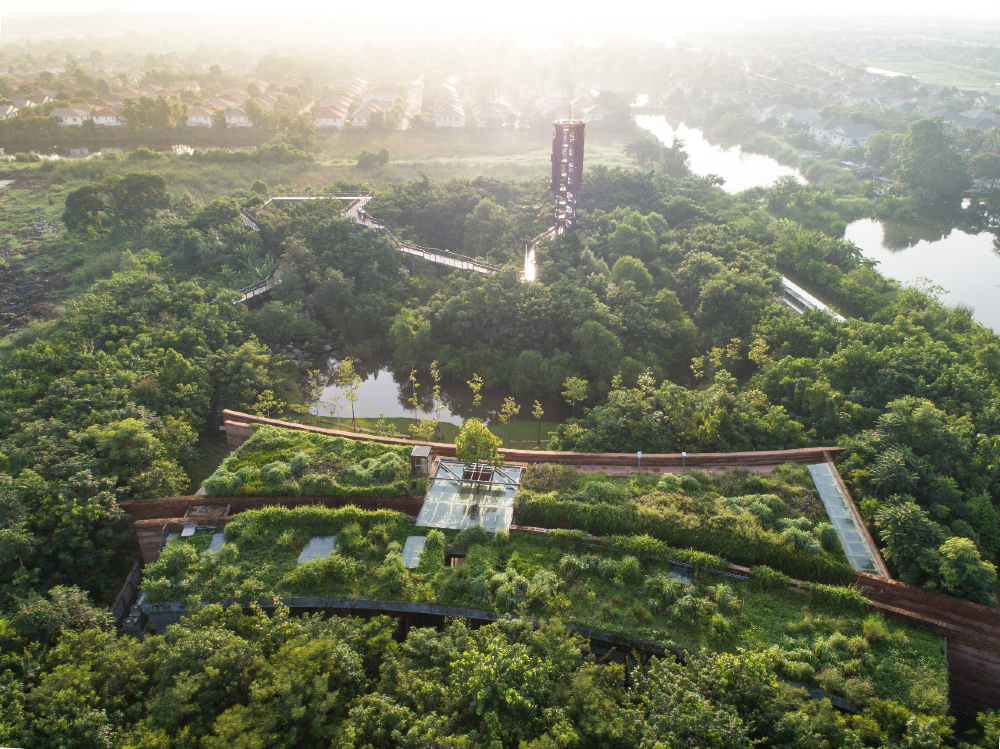 “If you have ever been to the Grand Palace in Bangkok, there’s a lot of lawn that must be manicured and plants that must be pruned. When we created this forest, we wanted to show that a landscape can be beautiful, but not in the sense that it used to be,” Tawatchaisays of the project that propelled him into the spotlight. “We used exclusively native plants that belong to the essential native flora of Thailand. The rain, the sunlight, all of the natural processes will continue to sculpt this landscape for years to come. Eventually, we will have stronger, better trees and plants that are shaped by nature, even though we initiated it.” 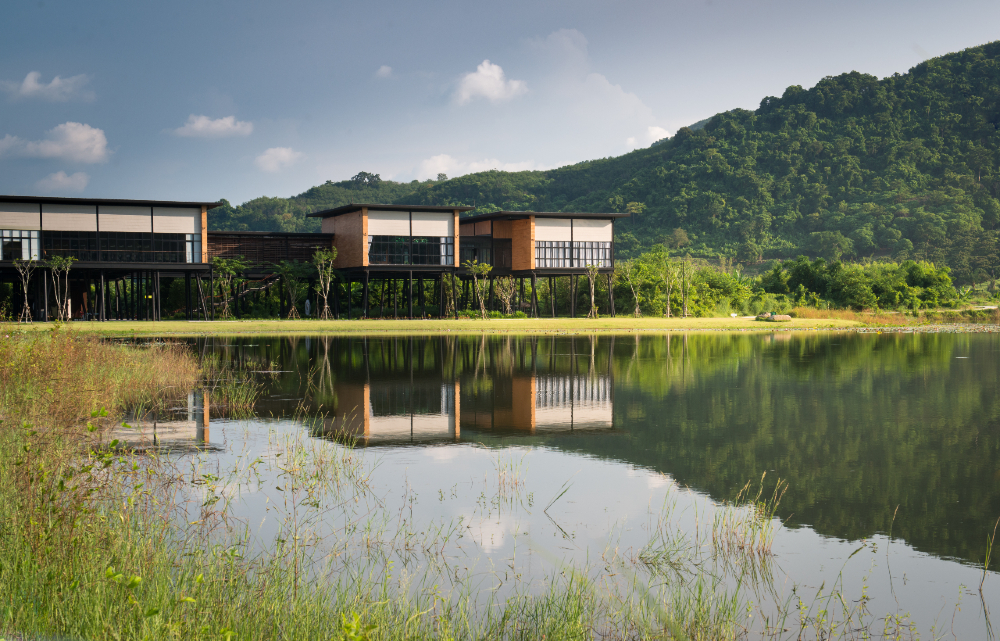 “Wangchan Forest proves that you can still accomplish much of the concept of the Metro Forest on a lower budget,” Tawatchai says. At approximately 50 hectares, this sprawling green space in Wangchan Valley presented a number of challenges. The first: to create a self-sustaining, energy-efficient means of keeping the foliage green throughout the year. “We had to find a way to irrigate the land without constantly pumping in water,” shares Kobkaikit. “We studied the sloping topography, so that at the end of monsoon season, we could gradually release water through the dry season. After five years, I can say that the result has been very successful.” Although this lavish private estate already had a thoroughly designed landscape when Tawatchai was brought on in 2007, the vegetation had been planted with little regard for the topography of the site. “Even though it was on a hill, it flooded sometimes, which was strange,” he says. “We arranged the landscape to make sure that the water would flow nicely. Also, we wanted to reveal the villas on the property, many of which were built with teak in the traditional Thai style. I wanted visitors to be able to appreciate this rare and beautiful architecture.” 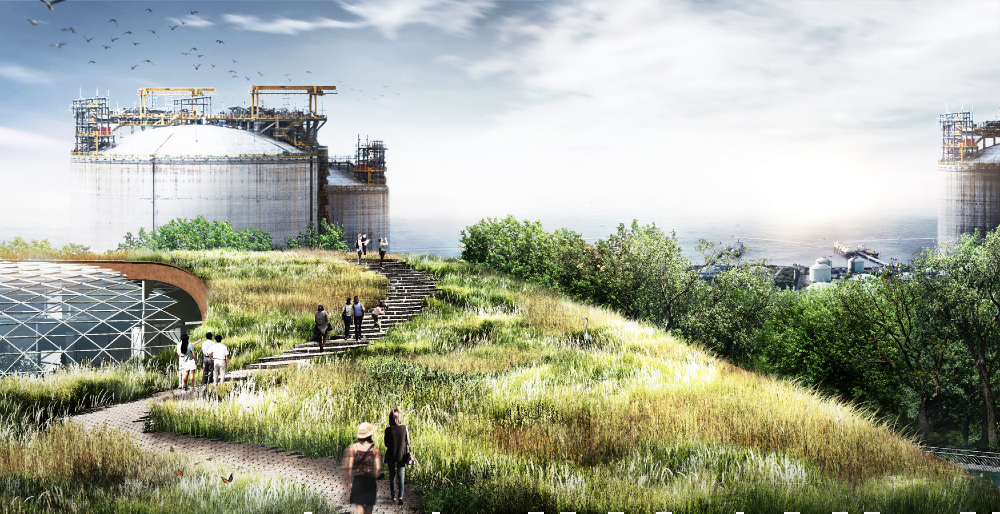 For this competition entry for a proposed development on Thailand’s eastern seaboard, Tawatchai turned to the region’s past to design its future. “It’s our attempt to recreate this landscape so when people come to see the site, they could understand what this landscape was like before industrialization,” he says. Part of the development plans for the area include natural gas refinement, which produces copious amounts of water as a by-product. Tawatchai sought to use the excess water as a natural source of irrigation for vegetation. “We looked at how to recreate this ancient landscape using this excess water,” he says. 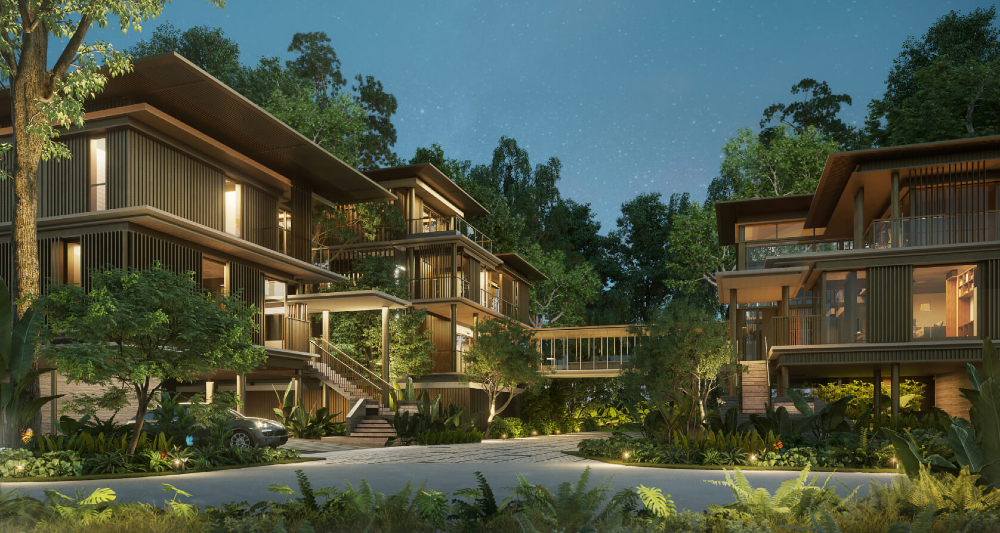 Once completed, this USD4.14 billion, 63.7-hectare private real estate development on the outskirts of Bangkok will offer urbanites a greener alternative to city living. The Forestias will feature everything from a five-star hotel and upscale residential villas and condos to a medical centre. As the name suggests, however, the most important centrepiece is the forest itself, which is where TK Studio came into the picture. “The central concept of the whole project is that people will benefit by living closer to nature,” Tawatchai says. “I believe this to be true. Harvard University intends to conduct a study of the impact of nature on mental health. Everyone living within this complex will have access to the forest.” 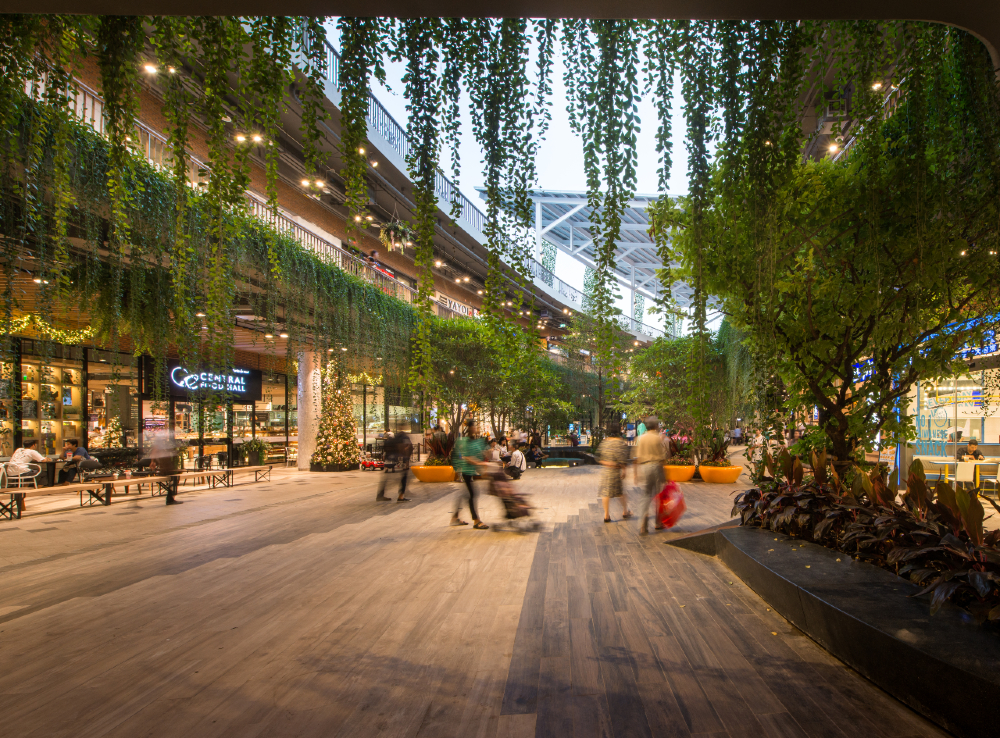 While Bangkok has no shortage of malls, this community shopping centre run by the Central Group offers a rare antidote to the chilly, climate-controlled interiors of Siam Paragon and EmQuartier. CentralFestival EastVille uses passive ventilation, clever shading, and strategically placed greenery to maintain a comfortable temperature in its open-air corridors. “People complain in Bangkok because it’s either hot or raining most of the time, so there’s a big push to cover up and seal off interior spaces,” Tawatchai says. “Once you close off the building, the experience of being outdoors is lost. The plants inside also start to die due to lack of sunlight. It took a lot of work to convince people to try this way instead, but what we’ve noticed is that guests actually seemed to prefer the uncovered, open-air sections.”

This article originally appeared in Issue No. 160 of PropertyGuru Property Report Magazine