Greg Shand has left his mark on numerous high-profile projects in Singapore, ranging from a landmark community centre to plush residential villas 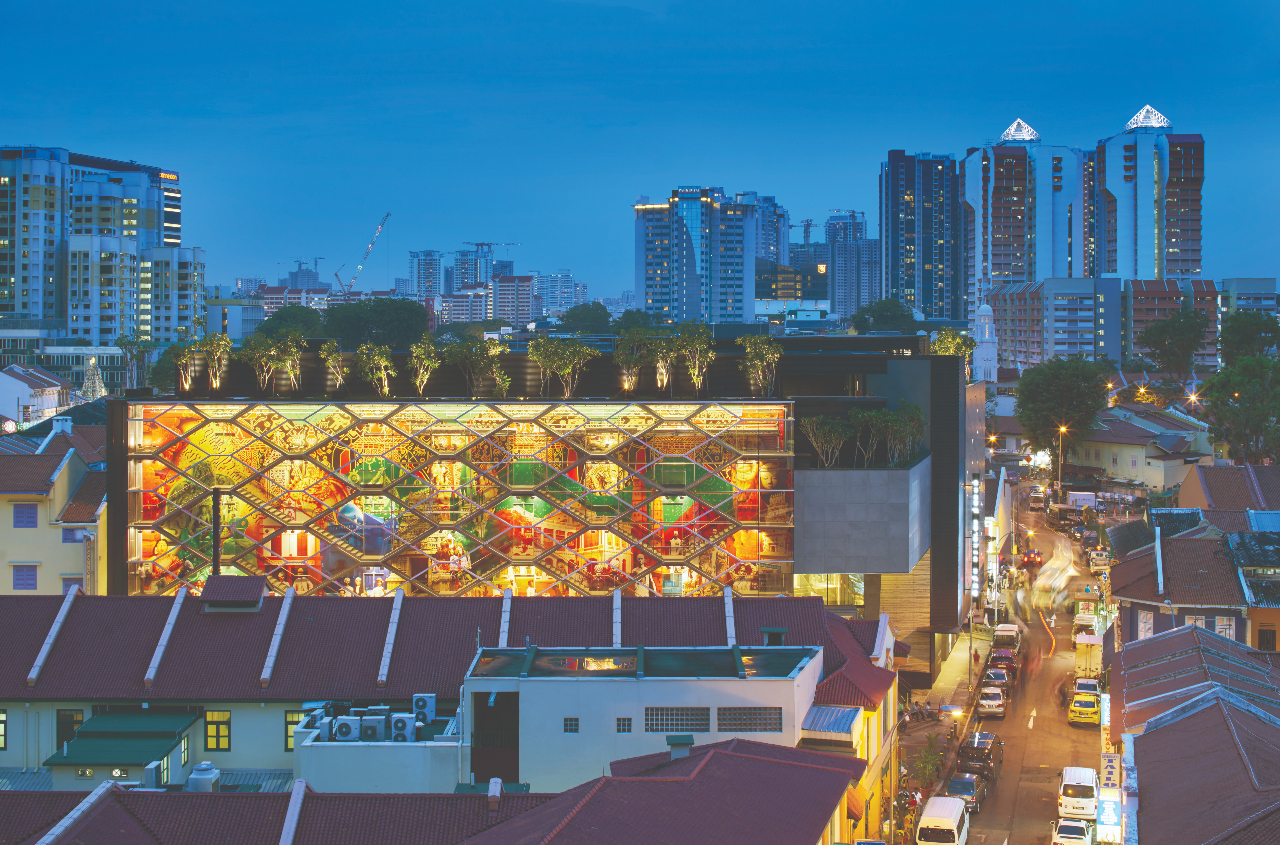 Few nations have transformed as dramatically in a scant half a century as Singapore. The Lion City’s gleaming, ultra-modern skyline is the pride of Southeast Asia and a testament to decades of economic prosperity. For many years, this initial rush towards modernity seemed to come at the price of preserving Singapore’s heritage, but the city-state has since taken steps to uphold and celebrate its rich, multicultural history.

In the colourful alleyways of Little India, efforts to protect Singapore’s cultural assets can be seen everywhere. Even as other districts have made way for glitzy high-rises, this vibrant enclave has retained much of its original character throughout the years. Shops decked out in posters of Bollywood stars still sell brilliantly hued saris and glittering bangles. On Diwali and other festivals, the local Indian community still gathers to celebrate in these streets.

“It’s one of the few truly eclectic places in Singapore that hasn’t been gentrified and beautified by the government,” says Greg Shand, founder of Robert Greg Shand Architects, which in 2011 won a competition hosted by the Singapore Institute of Architects to design a heritage centre that would reflect this unique neighbourhood.

Shand first studied architecture in his native New Zealand before moving to Japan to practice it. By the time he founded his own firm in Singapore in 2005, he had acquired a passion for sustainable design and elegant, minimalist linear forms that would serve him well in creating not only the Indian Heritage Centre, but also some of the most show-stopping villas along the waterfront of Sentosa Cove: one of Singapore’s most alluring addresses.

In designing the latter, Shand understood that any new element added to the area must seamlessly integrate into its surroundings rather than impose upon them. By transforming the road directly in front of the building into a pedestrian-only walkway and mirroring certain design elements of the building in the pavement, the firm created a welcoming space that felt like an organic part of the community.

“We wanted people to congregate and really engage with the building,” Shand says. “They wanted a sustainable building and a contemporary interpretation of the Indian community because it’s so diverse.”

Conscientious effort was made to ensure the design was grounded in cultural specificity, rather than in generic tropes. At the same time, Shand was highly aware of the fact that Singapore’s Indian community has ancestral roots in all corners of the subcontinent, and he did not want to highlight one particular region above the rest. “We didn’t want to bias any one part of that community,” affirms Shand.

The firm finally found its aesthetic inspiration in an ancient piece of architecture. “We loved this one image of a traditional well in India. It’s a beautiful, utilitarian form of architecture and also metaphorically where people would traditionally converge,” he says. “The Heritage Centre was intended to celebrate the contributions of this community and to create a hub for events, so we used this image to create a contemporary motif for the building.”

“We wanted people to congregate and really engage with the building. They wanted a sustainable building and a contemporary interpretation of the Indian community because it’s so diverse.”

To fully showcase that motif, Shand injected innovation into the museum experience. As visitors wandered from floor to floor, they would exit the darkened, climate-controlled galleries and ascend a series of stairs modelled after those in the well against the backdrop of a custom work of art. The contrast of the solemn, contemplative exhibits with the riotous, colourful reality of daily life in the area makes the Indian Heritage Centre a cultural space unlike any other.

“We have a mural on the exterior wall that draws on the colours of the shophouses of Little India,” Shand says. “At night, that becomes quite a spectacle. We also have exhibits in that facade, which are lit up at night as well. They can rotate special exhibits within that space, so it’s really a canvas for the arts.”

It is precisely this flair for the unorthodox and the imaginative that has made Shand one of the most sought-after architects in Singapore. Whether it’s celebrating the city-state’s storied past or reimagining its future through eco-friendly, bespoke resort-inspired residences, his firm continues to push the boundaries of design. 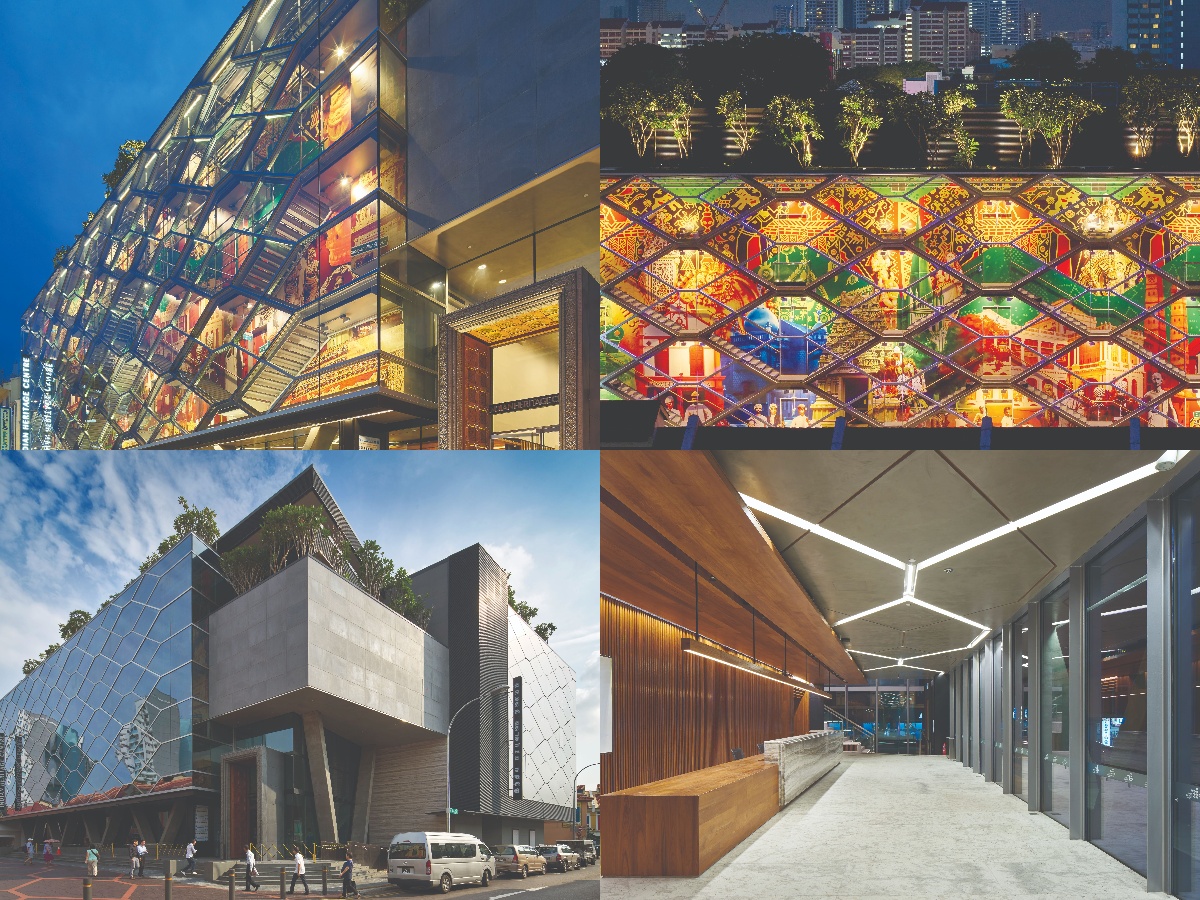 Located on buzzy Campbell Lane, Singapore’s Indian Heritage Centre keeps with the vibrant chaos of the neighbourhood. Says Shand, “We designed a very ‘active’ façade, where visitors become like actors in the scene when you look up from the street. We wanted the galleries to be these dark, introspective spaces, then the facade pulls people out of the enclosed interiors and gives them an actual reference point of the real Little India.” Creating a transparent facade that would allow museum visitors to look out at their surroundings presented an environmental challenge, however. “We didn’t want to air-condition a glass box. Therefore the skin of the building draws in air from below and we have mechanical fans at the top. In a tropical environment where it’s humid, the best way to promote comfort is to promote natural airflow, which we supplemented with some fans,” says Shand. 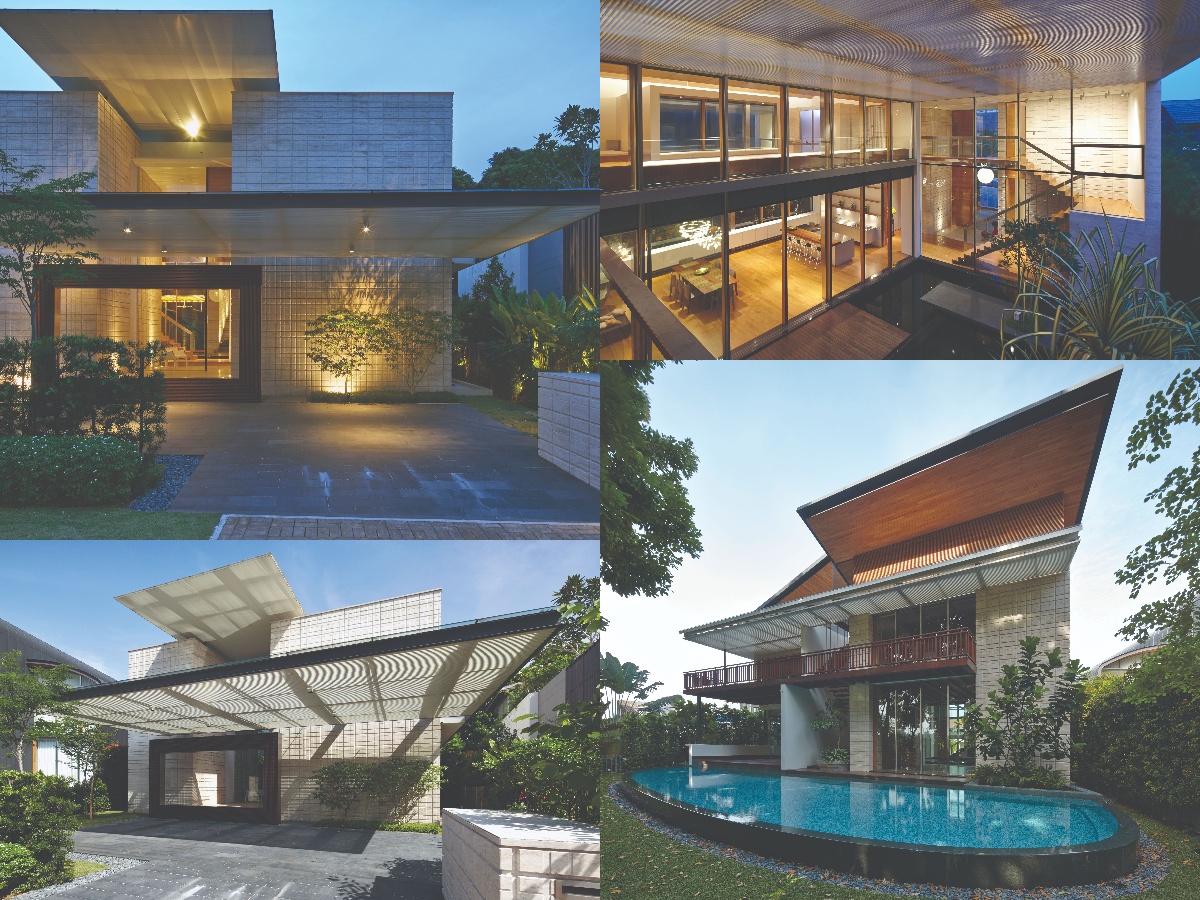 “Sentosa is a resort area, so it’s really appropriate to make it feel like you’re by the sea,” Shand says. As this particular villa does not have a sea view, Shand’s firm created a zen courtyard pond. The abundant water features in the interior provide an overarching sense of tranquillity and naturally reduce the need for air-conditioning. As with many of his works, Shand sought to bring elements of the outside into the interior for a harmonious whole. “The facade is a customised carved pattern that flows inside as well to integrate the interior and exterior. All the doors slide away and there’s shading to provide natural cooling,” Shand says.

Shand has received a number of unconventional design requests in his career, but one of his personal favourites is this unusual nautical design for a villa inspired by a branded Hermés Yacht. “It’s like being in the hull of an upturned yacht. There’s a large wine cellar with a tasting room and lockable private cellars,” Shand says. “It was a lot of fun doing these branded and stylised residences according to people’s tastes.” He also took care to personalise the design as much as possible. “The owner loves to cook and entertain, so there’s a teppanyaki counter right at the heart of the house.”

More: SODA Thailand takes on resort and hotel designs that stand the test of time 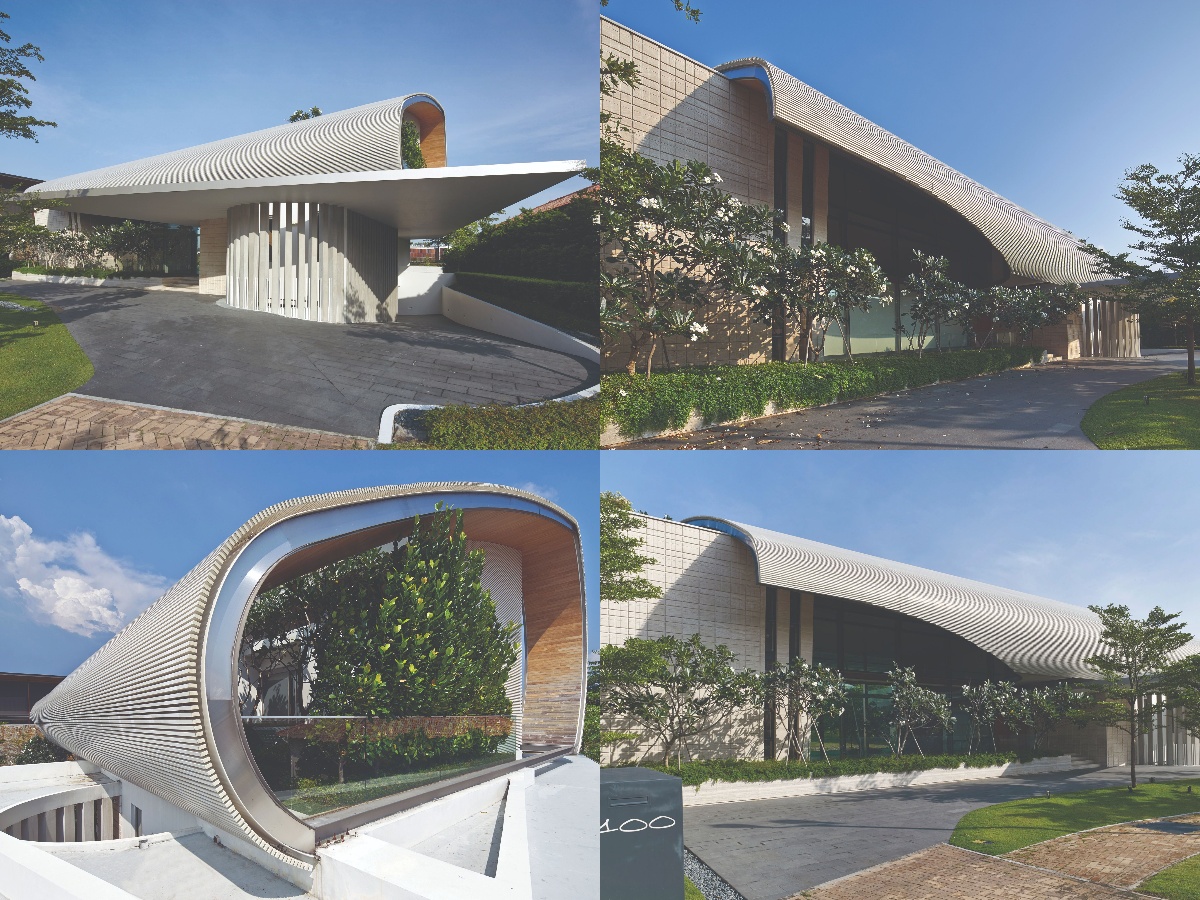 Green spaces may be the ultimate form of modern urban luxury, which is why the distinctive private roof garden is so critical to the overall aesthetic of this stunning villa. Rather than simply place a grove of trees on top of the structure, Shand designed an unusually shaped roof to shade residents from the subtropical sun. “We incorporated a wave form in the roof. We focused on natural timbers, natural textures, and bringing that stone from outside in,” Shand says. This particular villa also has some especially over-the-top opulent touches. “We have 24 -karat gold swimming pool tiles and a big pond in the basement.” 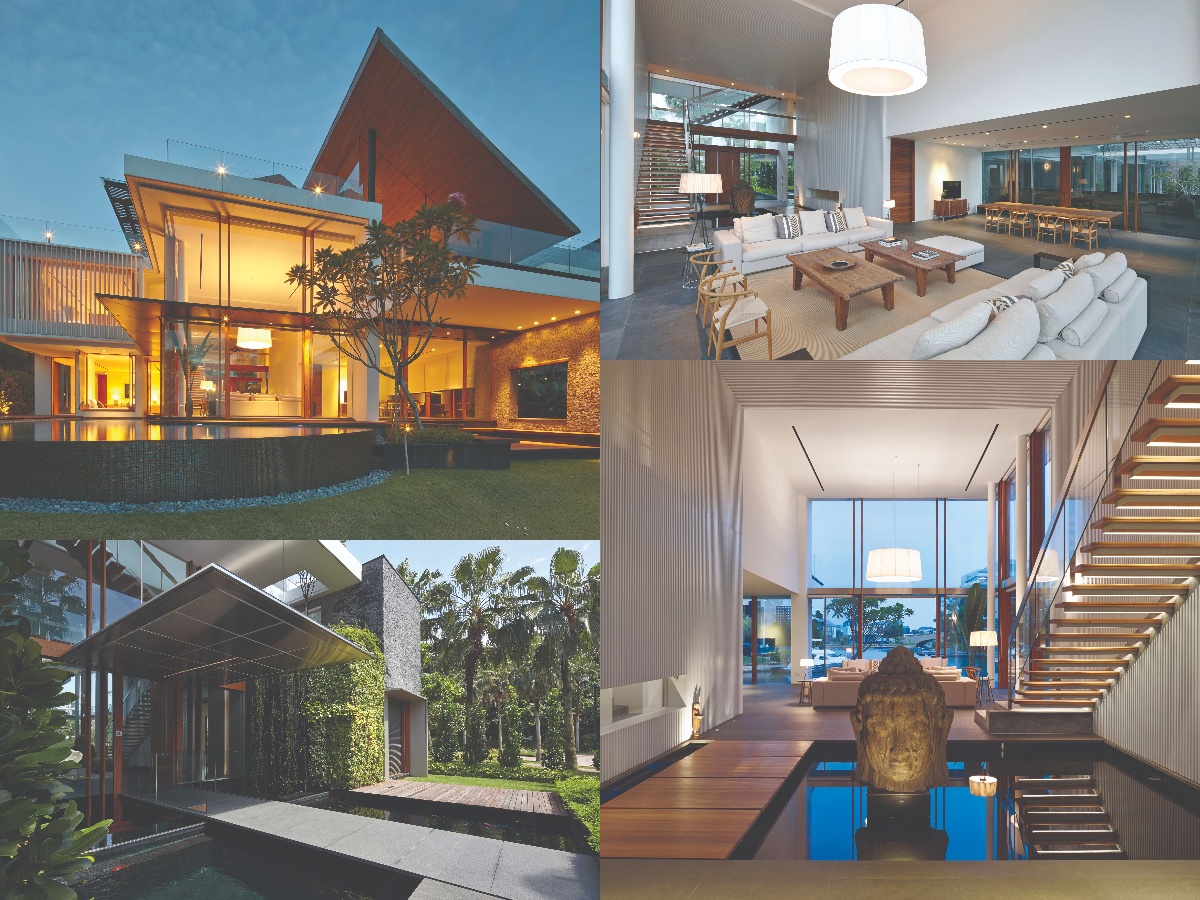 In order to capture the aura of a luxury hospitality venue, the firm opted for a particularly striking entrance for this villa overlooking the ocean. “There’s a private garden and you walk across a koi pond to reach the entrance. You’re surrounded by plants. You hear the water from the water fall and then you come into this very serene double volume entrance. You enter across a bridge and as you enter into the home, you see the Buddha head across the pond. A pool also wraps around that living and dining area,” relates Shand. 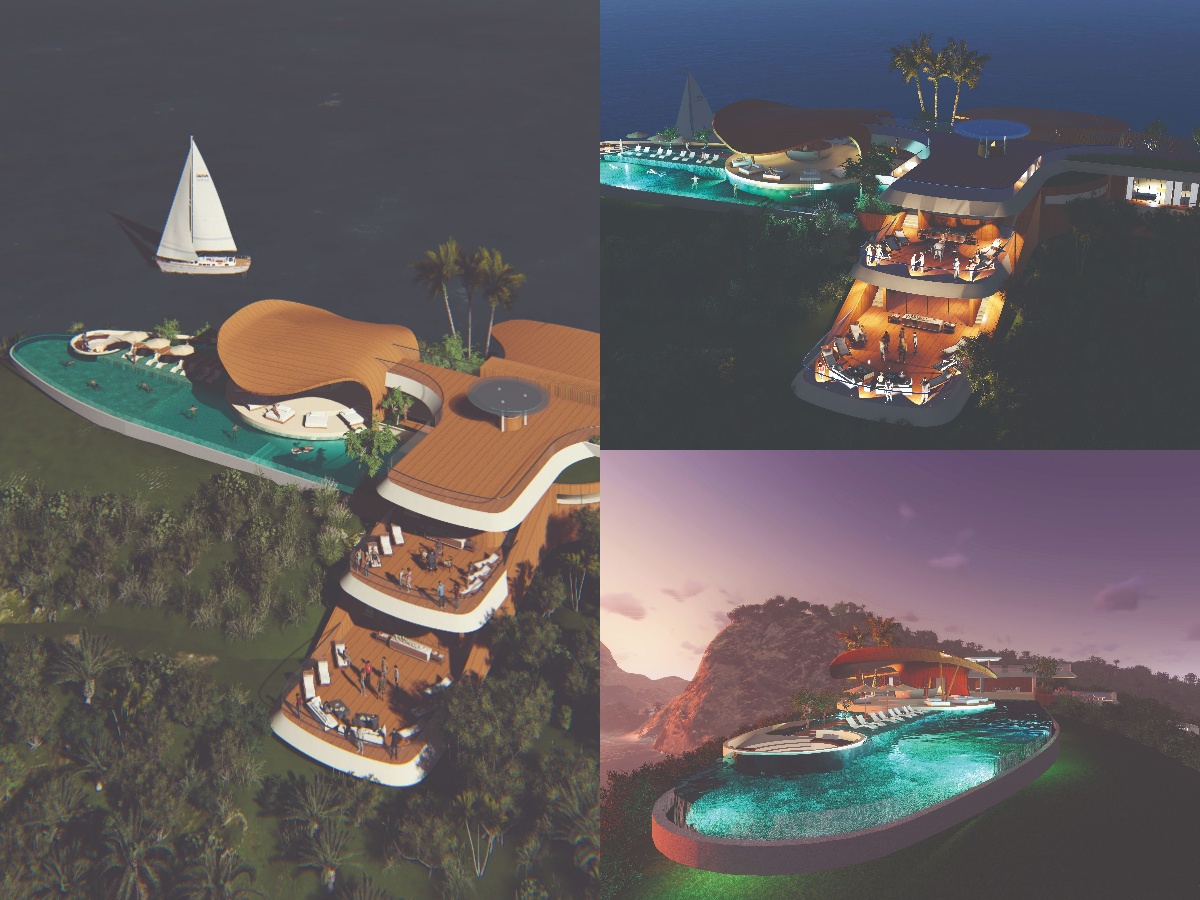 One of Shand’s most eye-catching designs stems from an unusual source. “Fritz Hansen asked us to design something for the 60th anniversary of the Series 7 chair,” Shand says. He envisioned a series of undulating curves on the fictional resort’s rooftop that would mirror the iconic look of the furniture. “I decided to expand the fluid curves and other elements of the chair to design a boutique resort.” While this property has yet to materialise, Shand dreams of one day building it on a certain peninsula with breathtaking views. “It’s designed specifically for a very beautiful piece of land that I own and, someday, I hope to implement it.”