Gran Meliá Lombok, Invest Islands’ spectacular new development in Indonesia, makes the most of its paradisiacal site on the coastal slopes 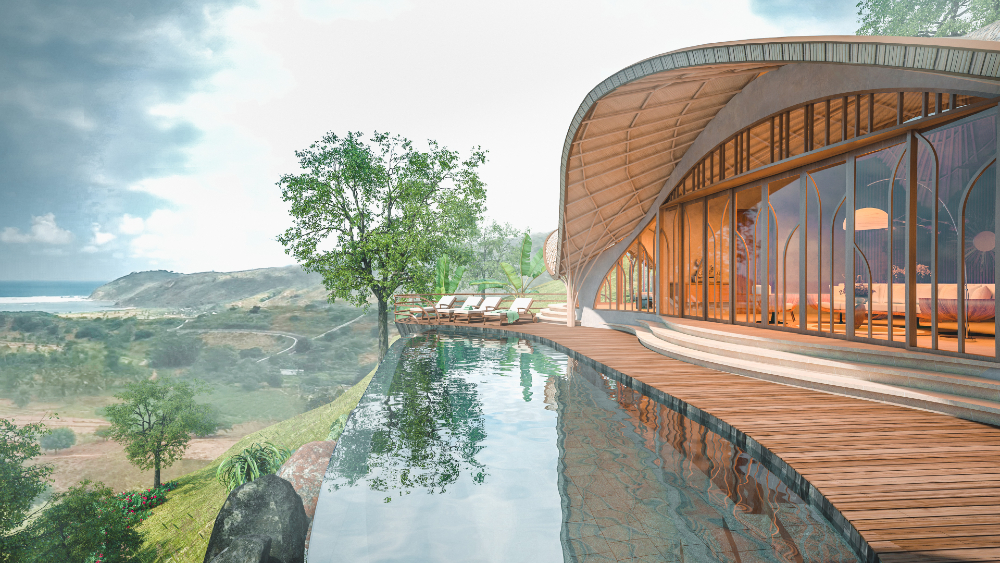 Where there’s a cornucopia of marine life, there’s Pantai Torok.

The unspoiled waters in the Elysian bay, gaping down the white sandy coast of southern Lombok Island, ripple with everything from giant sea turtles to coral reefs.

“We even have the dugong,” says Jack Brown, one of the area’s most prominent expatriates. “You can see them from the beach.”

Brown, along with business partner Kevin Deisser, is developing the first Gran Meliá project on the island. The USD70-million project, crowned Best Hospitality Development (Asia) at the PropertyGuru Asia Property Awards in 2020, will be, as Meliá Hotels International CEO Gabriel Escarrer described it, a “destination resort in itself.”

The seeds for the project germinated in faraway Mallorca where University of Granada alum Deisser met fellow hospitality industry stalwart Brown. In 2015, the duo reunited halfway across the world in Gili Trawangan where they established the business outfit that would become Invest Islands.

Having banked land in exotic sites across the Indonesian archipelago, the development company now boasts around 60 hectares of landed assets under management. But it was Pantai Torok that captivated the team.

“The location was the first draw,” says Brown. “It has this idyllic, pristine beach, and you have the whole bay to yourself.”

The landowners, a tight-knit community of farmers, had been surprisingly willing to part with the site. Although a variety of crops grew well in some places, the site was too steep in general to be agriculturally sustainable.

“It worked out quite well because the locals, in general, prefer flat land,” says Brown. “We’re like, ‘Well, we want the hill because we get the views. We can have the altitude and see more from up there.’ Also, beachfront land is not the best for growing because of the salt.”

lnvest Islands acquired plots incrementally from the landowners, many of whom are related to each other. From a single land certificate of less than a hectare, Invest Islands’ acquisitions multiplied to 16 hectares. “It was a kind of chain reaction,” recalls Brown.

There are beautiful undulating hills on the site—interesting angles. I wanted to do something integrated into the landscape: bringing in a natural aspect that made the buildings feel like they’re almost growing from the ground

The site was initially master-planned as a private residential development with two- and three-bedroom villas. “Originally it was, ‘Hey Charlie, we need some awesome-looking villas that could be built on steep land,” says Brown, referring to Charlie Hearn, founder of Bali-based firm Inspiral Architects. “But we hadn’t defined what the project was, what it was going to be, and who was going to manage it.”

That manager turned out to be Meliá Hotels International no less. The Spanish hotel chain and Invest Islands last year inked a 15-year hotel management agreement, ensuring the project will be built and operated up to par with the opulent standards of the Gran Meliá brand.

“There are beautiful undulating hills on the site—interesting angles,” says Hearn. “I wanted to do something integrated into the landscape: bringing in a natural aspect that made the buildings feel like they’re almost growing from the ground.”

The slopes challenged Inspiral as much as the builders, Balinese construction giant Tunas Jaya Sanur (TJS), which signed a memorandum of understanding with Invest Islands in 2020. The project necessitated numerous excavations into the mountain and employed the use of many retaining walls. Construction was especially arduous during the rainy season, let alone the pandemic.

Defining the roads and access routes relative to the plots, many of which had been presold, weighed heavily on the architects. The accuracy of the curve radiuses on the roads was crucial to the master-planning process, too.

“Designing on a steep hill is a double-edged sword,” says Hearn. “In one sense, it allows you to do things which make the building look more spectacular. The biggest challenge is working out all the routes and inclines to get to all the various plots and locations because we’ve got to make sure that works for an easy sense of transport accessibility to every site.”

Even though they proved easier to work on than the hillside, the flatlands presented the team with another quandary entirely. The low gradient of the beachside meant that the units behind the waterfront villas do not get full bay views. To add elevation to the area, builders utilised land from the hillside excavations.

While not one for pastiches of vernacular architecture, Hearn made sure to slip Lombok’s character into the buildings. The island’s famous ikat textiles and handicrafts suffused the conception of the design, with abstracted patterns finding their way to the roofs, screens, and motifs.

“Lombok has quite a distinctive style so we put little aspects of that into the project,” says Hearn. “Just being here in Indonesia where you have a certain way of living—that changes your perspective. The culture here, there’s no way of escaping it. It’s such a strong culture that it embeds you, and it consequently comes out in the design.”

Adhering to Inspiral’s ethos, the project keeps the supply chain as close to home as possible. The stone finishes, for example, are sourced from Lombok and Java. Inspiral also recommends eco-friendly treated bamboo and plantation timber in general. “We always make a big point of never using timber that’s from rainforests,” says Hearn.

To reduce the strain on groundwater, edifices are equipped with rainwater catchment tanks as well as greywater reuse systems. Solar roof panels provide counterpoints to the grid.

More: 6 reasons why Bogor, Indonesia is an up-and-coming address

When it finishes in 2024, Gran Meliá Lombok will feature a YHI spa, a Yoshi Izakaya restaurant, a fitness centre, and a kids’ club, among others. Lombok’s prospects energise Brown, who attributes his entrepreneurial spirit to his great-grandfather who worked in Scotland’s Harris Tweed industry. With its rising middle class, Indonesia is well placed to provide the property, only the second Gran Meliá project in the country, a dependable fount of guests.

“You get people moving up and they like to have something like Meliá, Spanish luxury intertwined with Lombok’s culture and heritage,” says Brown. “It’s something unique and quite desirable from an experiential perspective.”

With the might and splendour of the Meliá brand behind it, the team waxes optimistic about the resale value of the units and the overall appeal of the resort. Like the turtles circling Pantai Torok’s reefs, the fauna of a different kind will have more reason to come back to Lombok.

“On the hillside, you’re like an eagle, perched, ready, surveying the land,” says Hearn, adding, “whereas, down the beach, you are more like a shell, sat on the ground, absorbing, trying to catch the light and breezes differently.”