A teenage prodigy from a family of architects, Medi Korasani continues to hone his passion for architecture as director of Melbourne-based DW Architects & Interiors

For Medi Korasani, director of the Melbourne-based DW Architects & Interiors, design has been a calling. Born into a family of architects, he grew up flipping through blueprints the way other children look at colouring books. When Korasani was a boy, his father taught him the basic tricks of the trade and forced him to think critically about finding solutions.

“You know when people ask their kids to stand in the corner when they’re naughty? I would be asked to resolve a floor plan,” Korasani says with a laugh. “It was my father’s dream for me to become an architect and take over his company.”

By the time he was a teenager, he had already graduated to studying the large-scale projects his father’s firm was working on around the Middle East. After a visit to the UK to learn how to use the then cutting-edge AutoCAD software for 3D rendering, he was responsible for passing that knowledge on to architects decades his senior.

“I became an AutoCAD teacher for my dad’s company. I was 11 or 12 years old and I was supposed to teach all these old guys how to use a computer,” he says. “From that point on, I started working part-time at my dad’s company. I knew how to make a dollar by the time I was 15.”

That sense of self-reliance and a love of problem-solving have stayed with Korasani throughout his career. The projects that make him light up are never the easy ones, but the ones with some inherent challenge.

Yet while he relishes tackling these obstacles, he’s not in it for glory. He learned at the age of 18, when he designed his first physical building, that it was better to set his ego aside. Though the project was a simple car park, it left a lasting impression on him.

“I came to understand how important it is when you design for people—not just as an artist or an architect thinking in the abstract,” Korasani says. “I started thinking about people, about the use of space, about the different needs that individuals have. Talking to the people who lived in my design changed my whole perspective.”

By the time Korasani branched out from his father’s architectural firm and founded his own, he was deeply committed to creating the kind of functional spaces that people would genuinely enjoy living in, even as their demands shifted over the years.

“We build something once, but it’s going to be used for the next 30 to 60 years, if not more. Our lifestyles evolve and change,” Korasani says. “So, I started thinking more futuristically about how to use space efficiently. It’s not about having a certain style but more about keeping things simple. As they say, classics never get old.”

At a certain point, it was only natural to bring that philosophy from exterior to interior. When a clash of ideals meant parting ways with an interior designer on a project, Korasani simply resolved to do it in-house. Today, DW Architects & Interiors has an extensive interior design department.

“To me, architecture is not supposed to put walls between spaces,” Korasani says. “Any space you create internally has an extension outside. Like when you start thinking of drawing lines so that both sides of the divide are aesthetically beautiful and functional.”

You can go out of fashion in a matter of a couple of years. Functional design principles never go out of style. If you’re doing things for fashion instead of thinking of the user, you’re doing it wrong

Sustainability, naturally, factors into every project that DW Architects & Interiors takes on, although Korasani is cautious to steer away from greenwashing.

He has little interest in simply slapping on a solar panel for cosmetic virtue-signaling purposes. Rather, he closely analyses each element to maximise efficiency in a real, substantive way.

“As architects, we have a lot of control over what we design and how it will be used,” he says. “But the bones of a building and the way it is conceptualised in principle have to be as optimised for efficiency as possible. It’s not just about adding on some gadget.”

More: Take a look inside one of Australia’s tallest skyscrapers

All of this is to solve the ultimate problem: How do you create homes that people will love to live in? The results are inevitably pragmatic, often striking, and, above all, timeless.

“You can go out of fashion in a matter of a couple of years. Last year, rose gold was in fashion. Two years ago, it was black,” Korasani says. “Functional design principles never go out of style. If you’re doing things for fashion instead of thinking of the user, you’re doing it wrong.” 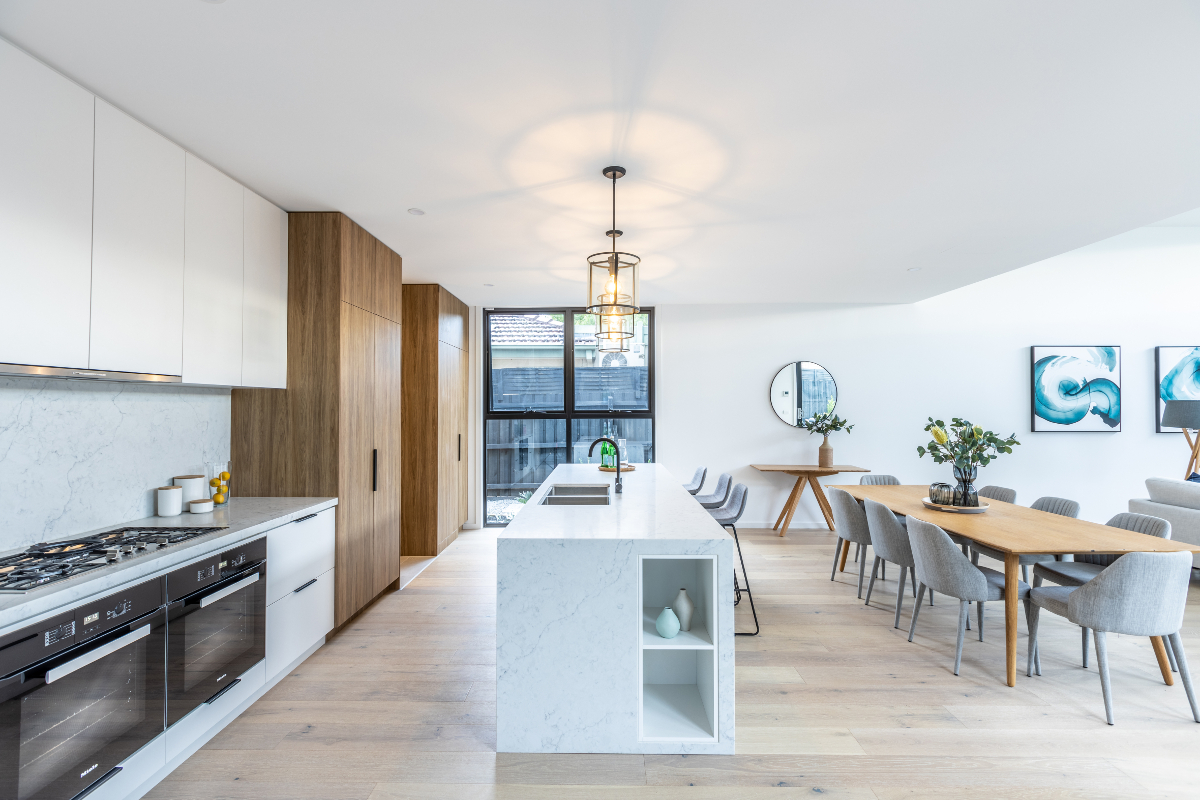 “The question was this: how can we make this a functional space, but bring in some excitement to the building?” Korasani says of this stylish single-family home. Australians tend to be family-oriented, which meant that it was crucial to allow ample space for up to four or five children, as well as elderly parents. With high ceilings, modern furnishings, and plenty of sunlight, even a large family would never feel cramped here. “It was all about mixing the interiors and exteriors. We’re trying to confuse the brain to think in-between spaces.” 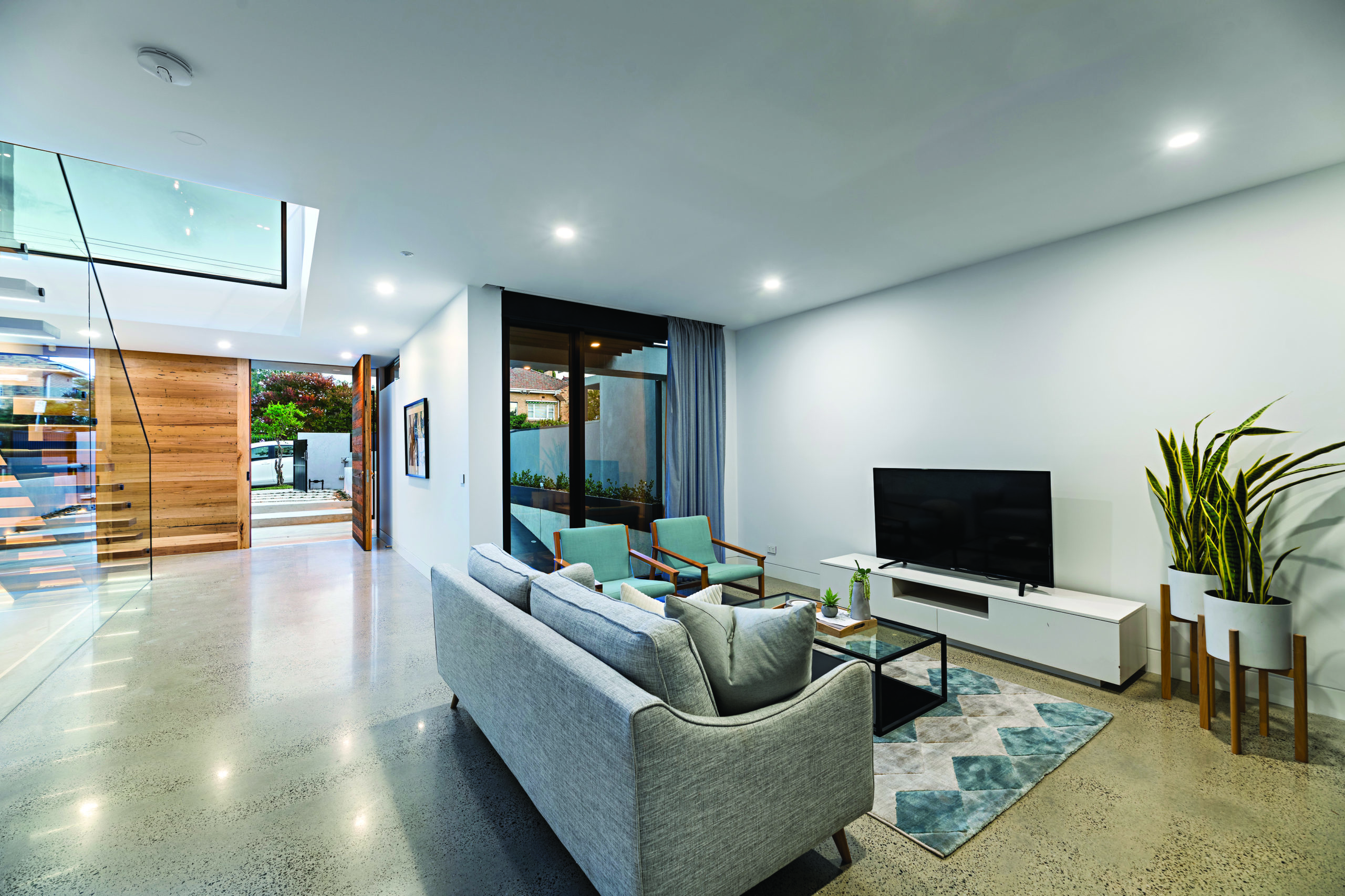 “This was a narrow site with a massive slope. That created opportunities for views, but also made for a tricky design,” Korasani says. Instead of treating the slope as an obstacle, he used it to his advantage. “We had to create a multi-level design that respected the site. We wanted some of the ‘wow’ factors that you see in a mansion, but in a very contemporary style,” he says. Knowing that a young, creative couple would be moving into space influenced his decision. “For me, it was important to bring in light and a bit of greenery. It mixes inside and outside, so you have the feeling that not only the interiors but also the exteriors are part of your home.” 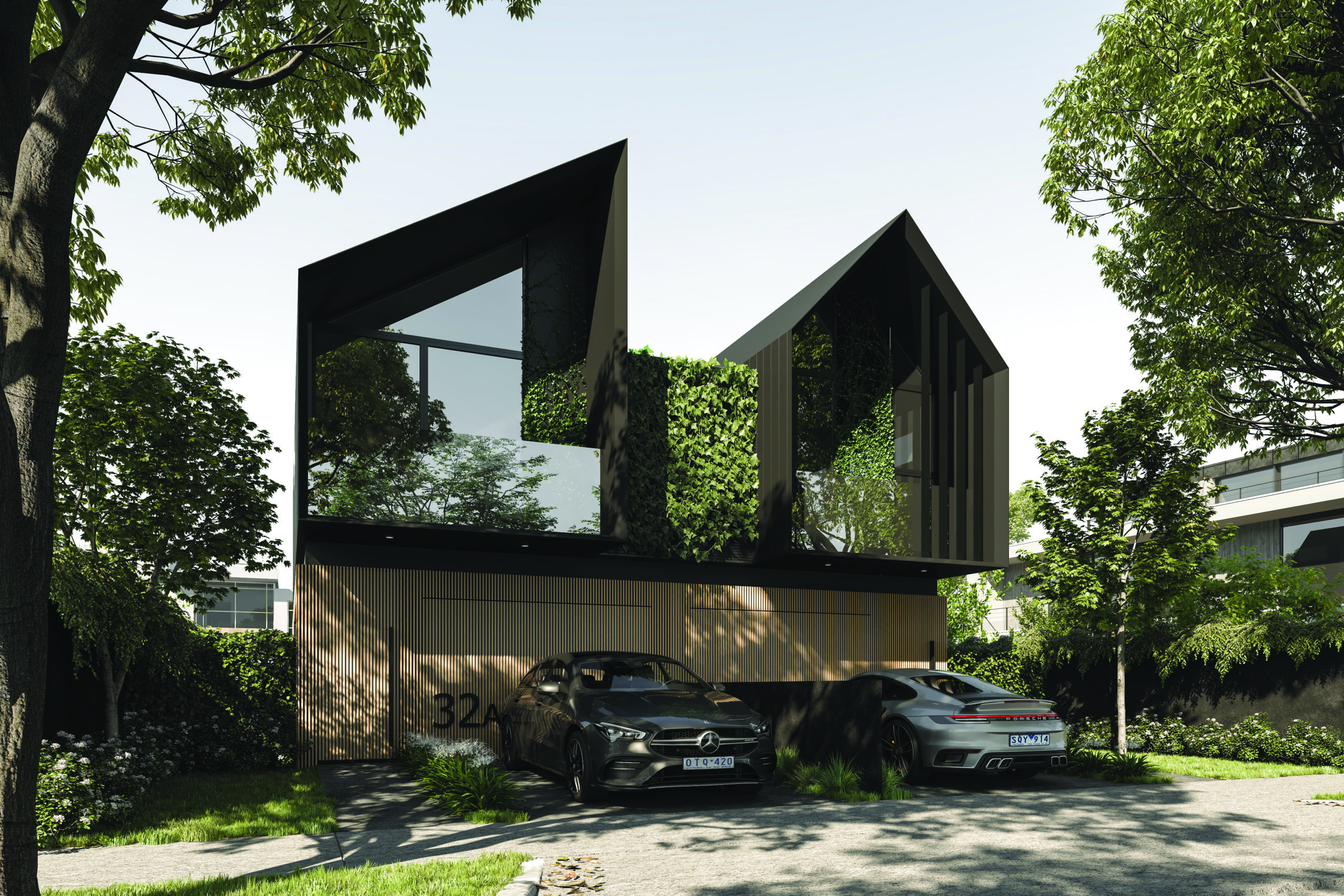 “We realised there was a certain demographic in Elwood, which is a cool, expensive area in Melbourne,” Korasani says. “People love living there. It’s full of cafes and has its own culture and character.” To capture some of that energy and create a space that would appeal to young, affluent urban professionals, he envisioned something striking with an abundance of plants. “We thought, how can we design something that has an edgy element, but at the same time has some green, softening feel to it? When you’re inside the space, you have cathedral ceilings and skylights. It was all about maximising your ability to capture that northern light.” 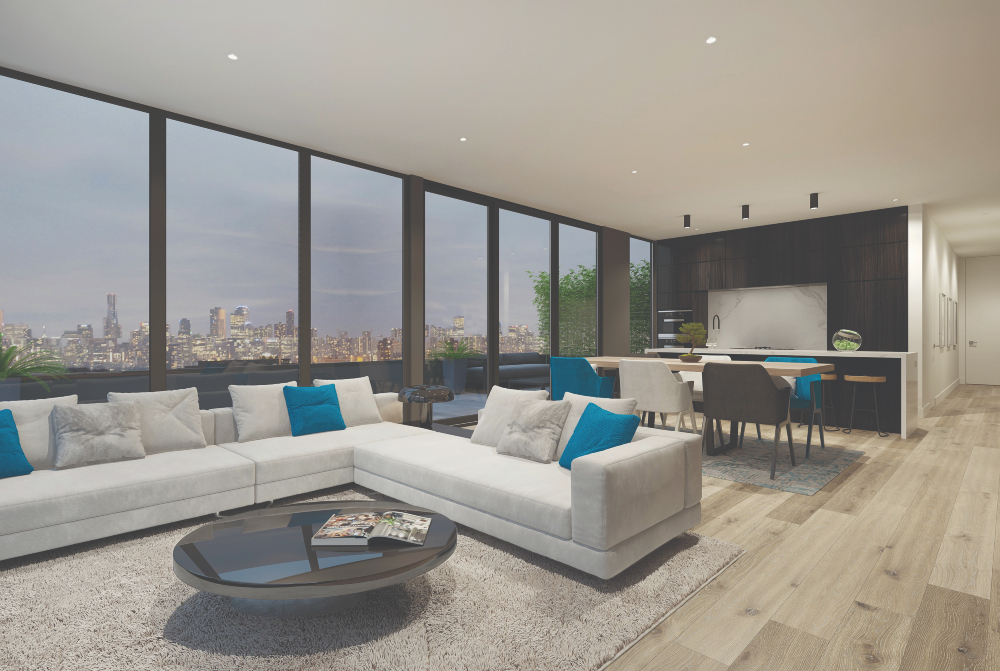 “This project is dealing with two different interfaces,” says Korasani. “They required something a bit iconic facing one way, and something simpler the other way. So, the building works with two different aesthetic languages as a result of the different levels.” Clean, strong contrasting diagonal and vertical lines add a visually dynamic element to the front of the building, while floor-to-ceiling windows on all three levels seamlessly integrate the surroundings with the sleek interior spaces, and also frame the unimpeded panorama of the glittering urban skyline. “It’s got very nice penthouses on top, which have city views.” 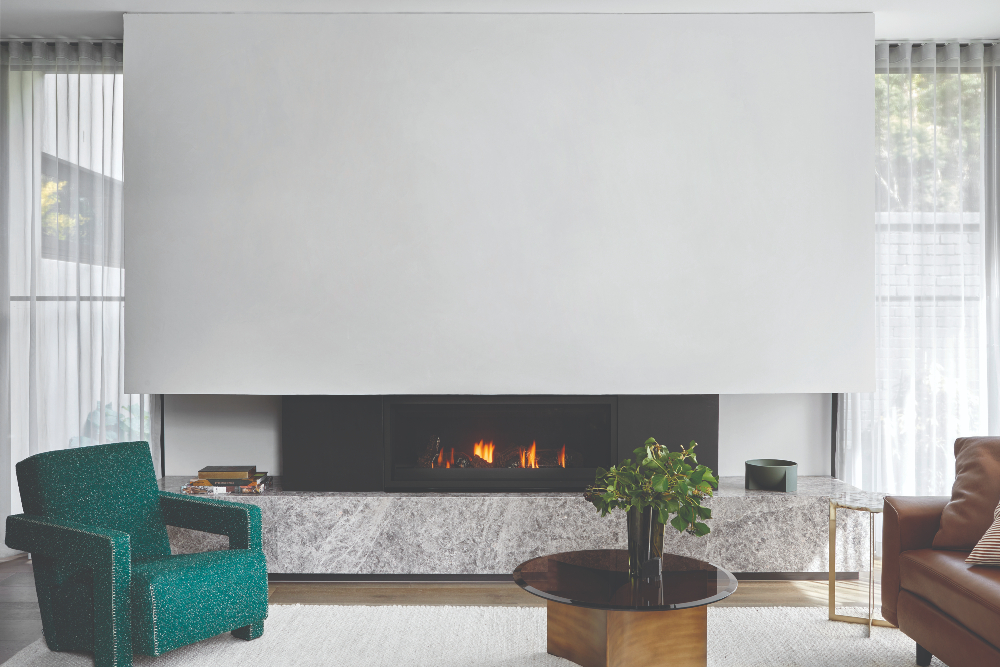 “A developer asked us to design this for him to live in,” says Korasani. “He’s a younger professional, so he didn’t want a large space. He wanted a minimal, efficient, optimized design.” The result certainly fits that description, with a spectacular rooftop terrace and an impressively large window with a view in the master bedroom. “It has multiple living zones—you could party in one zone and study in the other,” adds Korasani. “So, it’s not a large space, but you could still have a couple of young professionals having their own spaces.” 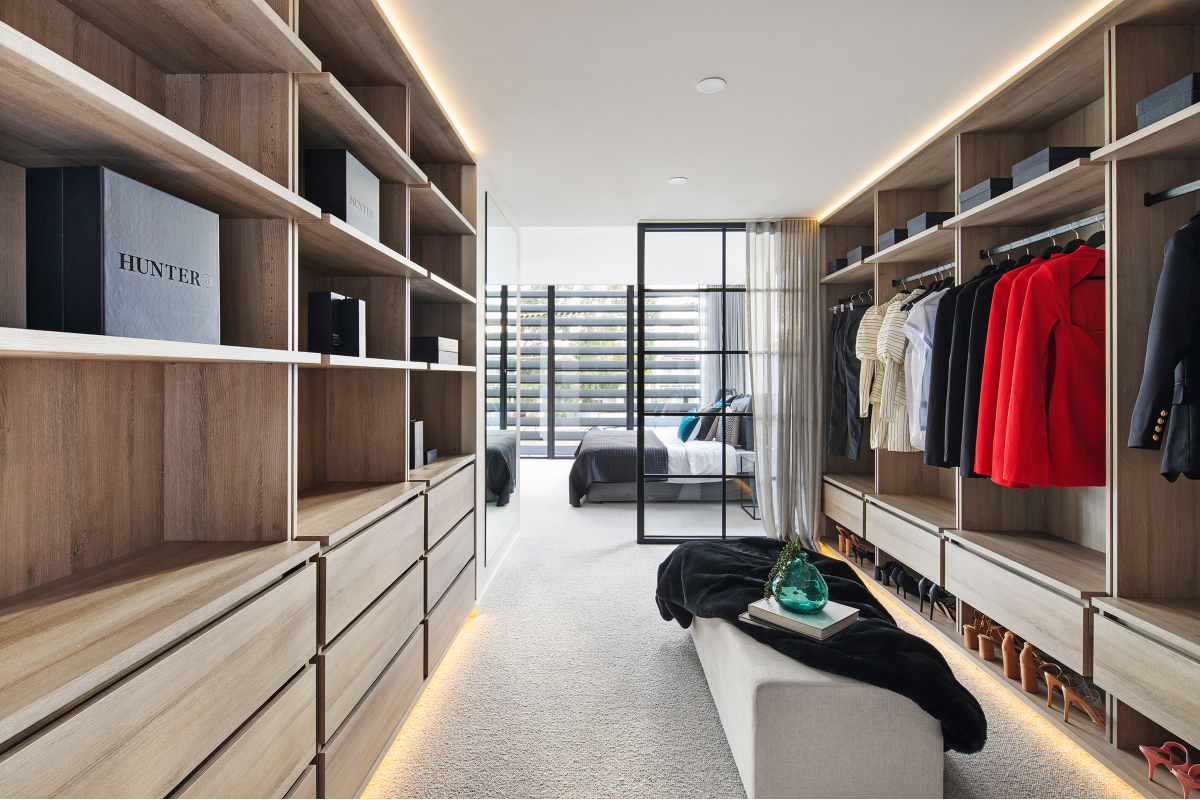 “We were trying to bring a touch of New York style to it because it’s a neighbourhood that gives you that kind of feeling. [South Melbourne] used to be industrial, but because of its proximity to both the beach and the CBD, it’s a very desirable area,” says Korasani. Much like in New York, each of the four homes had a minimalist footprint, meaning efficient use of space was essential. “In terms of design principle, we wanted to go simple. We wanted to use height to create a cool townhouse feel without too much width. We’ve incorporated pretty much every element that a house has. Each has a small backyard with a barbecue, as well as what my client calls rock-star dressing rooms.”