The breathtaking development reaches for the skies with panoramic residences and strata office spaces, and digs underground with subterranean retail options 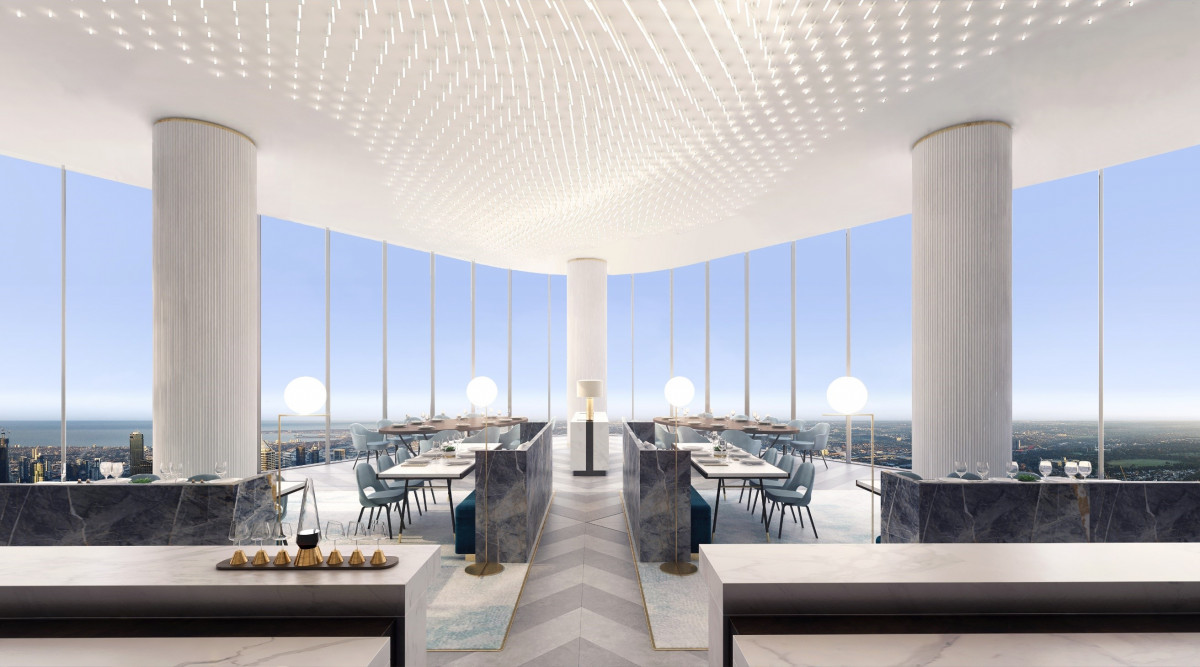 On New Year’s Eve, one of Australia’s most striking skyscrapers put on a show of optimism for the coming decade. Aurora Melbourne Central, then the tallest building in the Melbourne CBD, joined the city’s coordinated fireworks display, its façade glowing with a dynamic lighting system reminiscent of the motion of the aurora australis or southern lights.

The 88-storey edifice—a heady mix of apartments, offices, and retail spaces—topped out in April 2019 at an elevation of 298 metres high. “An exciting new addition” to the Melbourne skyline, according to the city’s lord mayor Sally Capp.

Malaysia’s UEM Sunrise had acquired the 0.8-acre (3,200 square metres) site at 224-252 La Trobe Street, formerly a parking area, for AUD43.15m (USD29.8m). It had then cobbled together a shortlist of three architects to submit design proposals, with Australian practice Elenberg Fraser prevailing over the competition.

But UEM Sunrise did not set out to reach for such heights. It took the coaxing of Caleb Smith and his team of architects at Elenberg Fraser to help UEM Sunrise break through Melbourne’s exclusive property scene.

“We didn’t start out by saying it was going to be the tallest, but we saw an opportunity for UEM to really set themselves apart,” says Smith. “We proposed two schemes: one that worked to the brief that was a much shorter building and explored some of the opportunities to make a landmark. We then proposed to them that we could actually give them a building that was much taller, giving them a far more powerful presence in the city.”

In designing Aurora Melbourne Central, Elenberg Fraser ditched a square format plan for more fluid geometry. The building is essentially shaped like the petals of the Hibiscus rosa-sinensis, the national flower of Malaysia, opening occupants to great vistas while treating bystanders outside to unique views of the structure.

On some level, Aurora Melbourne Central channels Uluru, that primordial symbol of Australia, in that it changes colours throughout the day—made possible with four different types of glass custom-made for the façade. “As you look at the building from those different vantage points, sometimes it’s quite surprising,” says Smith. “Its looks change within the space of a couple of hours, from one moment to the next.”

Skyscrapers are often at the mercy of ferocious air currents. While they created a distinct silhouette for the building, Elenberg Fraser also sought measures to help the structure reckon with high winds. Aurora Melbourne Central uses an outrigger structure solution to stabilise the building’s motion instead of relying on a damper tank, a body of water that keeps most tall buildings from excessively moving around in high winds.

“The building’s form functions like the aerofoil shape on an airplane wing where it allows the wind at the high levels to split around the building rather than coming down to ground level and creating adverse wind conditions,” explains Smith.

ProBuild helped Aurora Melbourne Central make its historic but dangerous ascent. The tier-one Australian builder, which started on construction in late 2015, used a new climbing screen system for the façade installation. “Building high-rises gets more difficult as you get taller and the wind and weather become less kind to you,” relates Smith. “[The technology] enabled them to continue working for longer and close up the building envelope earlier, which really helped deliver the project on time.”

Designing the development was as tricky above as below. To pass muster with the government, the architects strived to prevent the structure from overshadowing the forecourt of the State Library Victoria. Being sited next to Melbourne’s central underground train station at La Trobe Street also proved a major technical engineering challenge.

“A lot of engineering work was done to work out how we could put a very tall building next to an underground train station without impacting on any of the service through that tunnel,” recounts Smith.

The challenge of being next to the metro network has turned out to be a boon for the building’s seven levels of office spaces. Aurora Melbourne Central is now one of the city’s best-connected developments, boasting direct underground access to the concourse of the Melbourne Central Station. Capitalising on the plot’s location beside the city’s retail precinct, the building was programmed to have retail spaces on both ground and subterranean levels, for a lettable area of approximately 3,500 sqm. On basement level, the building’s retail concourse connects directly to the metro network. On ground level, retail tenancies feature direct frontage onto La Trobe Street, Little La Trobe Street, and a new laneway. This three-block link has been envisaged to teem with cafes and F&B operators, further activating Melbourne’s laneway culture.

Aurora Melbourne Central’s 959 residential apartments and 252 serviced apartments begin at level 10. Fitted out in Snaidero joinery from Italy, the homes have been programmed as a series of low-rise, mid-rise and high-rise stacks, each with its own lifting service. This creates a series of vertical communities with their own communal amenities, from swimming pools and gyms to movie rooms and karaoke lounges. “It’s really a chance to test our ideas around the vertical community and to see them in action: how residents can live in a way that has the advantages of being in the city, living in the city, but sharing in all those communal facilities,” says Smith.

The building’s relatively shallow floor plates invite optimum levels of natural light into the apartments. A high-performing low-E double-glazed system regulates the building’s internal environment to ambient conditions, while sophisticated centralised plant systems prevent low efficiency per unit of air-conditioning. A series of heat exchangers move the heat and coolness around the building in response to different heat loads.

All separable portions of the AUD750m project have been handed over, announced Anwar Syahrin Abdul Ajib, managing director and chief executive officer of UEM Sunrise, in November. “Strong settlement” of UEM Sunrise’s projects in Australia, which include the Melbourne high-rise Conservatory, drove revenues up to that point.

Vertical projects with a range of multigenerational apartments like Aurora Melbourne Central are only poised to prosper in Melbourne. While more than 220,000 people work within the CBD, only about 22,000 people have been able to live in it.

“I think in Melbourne, the big change over the last five years has been a much broader acceptance of apartment living as a way of delivering on the benefits of being in the inner city, staying close to friends and families,” says Smith. “That’s a trend that’s very much alive in Southeast Asia and something that’s really growing here in Melbourne.”

Residents are set to continue moving into the sold-out Aurora Melbourne Central homes in 2020. The building’s New Year’s Eve light show will also flicker for the rest of the year, akin to the nightly Symphony of Lights along Victoria Harbour in Hong Kong.

For Smith and his colleagues at Elenberg Fraser, the flowering of a 21st-century Australian landmark is a continuous source of pride. “As you move around the city and as an architect, you work so closely on these buildings, but then suddenly to step back and see the project in the larger context of the city,” says Smith. “That’s something that’s really quite special to me.”