One of China’s largest botanical gardens takes root, not in the wide-open spaces of a city, but inside a massive retail destination 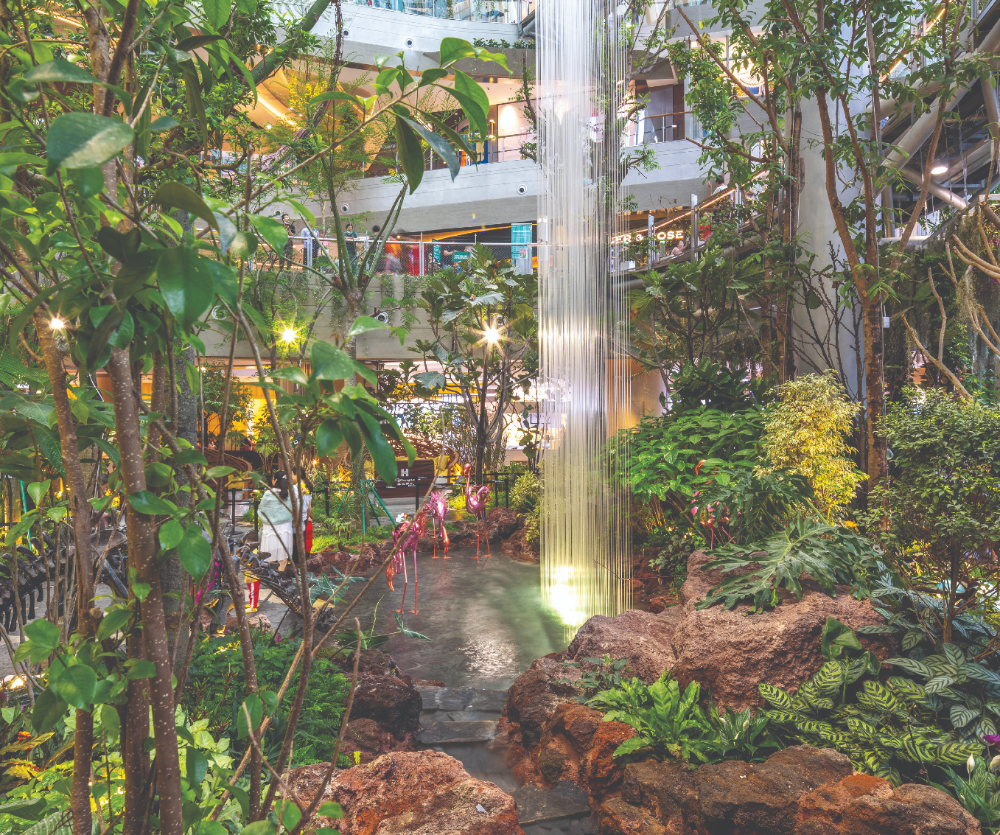 Consumers from China would normally be trawling luxury stores in Europe or North America. But with the pandemic corralling cashed-up shoppers—they purchased CNY47bn (USD55bn) in luxury goods within the mainland last year—business is booming for China’s retail sector.

In a Chongqing shopping mall, it is also blooming.

Inside The Ring Chongqing, the new retail destination by Hongkong Land, grows a 6,000-square-metre botanical garden, one of China’s largest. The 430,000-sqm development in Chongqing’s Jinzhou business district is the first of many “Rings” that, according to Hongkong Land chief executive Robert Wong, will herald “the future of retail.”

Design studio Lead8 stepped in the project in 2018 for a “major design intervention.”

“In the pre-Covid-19 days, a lot of shopping centres to us felt very monotonous,” says Lead8 co-founder and executive director Simon Chua. “The experience is the same from city to city. They don’t take on too much of a different identity apart from the tenant mix and the shops. The IP is not good enough anymore.”

In a sketch, Chua et al ideated something unique: a botanical park contorted into a 154,000-sqm mall. As the building’s main visual anchor, the park would mine the best practices of biophilia, the idea that affinity for nature is intrinsic to humans.

“That sketch was the sketch. That was the turning point,” Chua says. “The client looked at it on the wall and said, ‘Wow, we never thought about that before.’”

With China Construction Third Engineering Bureau, builder of the 354m-high Raffles City Chongqing, on board, the project broke ground by July 2019. The plot, accessed from Jinzhou Avenue and Huangjue East Road, lent itself well to building the seven-level mall.

“A lot of the foundation was really solid granite like in Hong Kong,” says Chua.

“We didn’t have to drill down and bury hundreds and hundreds of metres of piles. The challenges are there but the city has a very good foundation.”

The project called for sufficient tonnages of quality soil, especially in the microclimate-controlled sunken plaza where many of the flora would take root. “We didn’t believe in putting plants in a box,” says Chua. Procuring a nutritious soil mix was also key to success. As was timing: The plants were procured early, then taken to a designated space for observation in transit to the mall.

“Moving plants around too often can be very damaging for them,” explains Chua. “A lot of time was spent thinking about how they could adjust to the climate on the site before we moved them into a permanent space.”

With Shenzhen-based interior landscaper Popjoy Design, Lead8 sourced some 70,000 plants across 300 species for the project, with “thousands more” scrapped due to budget and practicalities like plant height and adaptability to indoor environments. The gardenscapes run almost the entire height of the mall, from the sunken plaza on Basement One (B1) to the L6 level. Mature trees are suspended from above as hanging fixtures, creating an “aerial forest.”

Seeing such a tableau of greenery only from a worm’s-eye view would have been an awful waste of space.

Spiralling up the garden is an interconnected series of vertiginous steel ramps, the Oasis Walk, designed by Lead8 to have shoppers engage with the garden at all levels. “The elevated walkways all help to create intimacy with nature and extend the gardens vertically,” says Chua. “It’s not just the idea of being in the botanical park but also how the botanical park can coexist with the commercial space.”

Ratcheting up the biophilic factor are 24m-high waterfalls, distributing humidity around the foliage, its cascading sounds soothing shoppers. At night, 3D projections are mapped out on the falls, further eliciting visceral responses from people. Sensors, which work with the HVAC systems to optimise temperatures and ventilation around the garden, detect anomalies in humidity.

“Humidity is the biggest enemy for retail, but it is also the friendliest element to the plants,” says Chua. “You’ve got to look after both.”

See-through curtain walls, punctuated by multi-level reading and social spaces called Open Lab, keep the garden sunlit. They also provide a visual connection to the retail street outside, landscaped by Australia’s Aspect Studios. The walls shoot up to a 42m-high dome, reinforced by vertical steel frames.

“It was very challenging to keep the vertical frame in place without bending because it does create a very strong torsional effect on the structure,” says Chua. “We had to use a lot of temporary structures during the construction stage to stop it from bending.”

The mall is made to recall a “mountain city,” with curved ceramic tiles and striated aluminium panels on its façade symbolising breeze, wind and cloud. The mountain theme continues inside, to the stepped design of the garden-facing balconies. The terracing of the balconies generates more sightlines around the garden.

“If you have such a beautiful space in the building, it will be a waste for some of the floors above not to see everything,” says Chua.

Speciality areas anchor every level of The Ring Chongqing, which holds 74,000 sqm in net leasable areas. These include a “commune village” on the L4 and L5 levels with interlocking, double-storey shopfronts for F&B tenants. On the L2 level is a 3,000-sqm STEAM (Science, Technology, Engineering, Arts and Mathematics) play centre, Kidzplorer. A sports zone, Free+, spans three levels of the mall.

More: A visionary shaping the societal fabric and skylines of Asian cities

The Ring Chongqing opened in April, concluding a three-year development sprint from design to construction.

“Everything in China happens at lightning speed—a decade is too long,” says Chua. “A decade is the amount of time China needs to put up a high-speed rail across the entirety of the country.”

The subterranean levels of the mall are connected to Chongqing’s Metro Line 5. It fell on Lead8 to curate the retail journey from the moment customers alight at Chongguang station, below basement level. “And before you know it, the botanical garden is right in front of you,” Chua says. “The fact that people discover a botanical park inside a building—it’s the least of what you expect when you go into any commercial space.”

Lead8 holds out hope for the mainstreaming of biophilic retail environments after the pandemic. For Chua, it lets younger people comprehend their place in the greater scheme of the biosphere. “I know I’ll have to bring my children because the garden has educational value in addition to just the experience of shopping.”

It becomes a learning experience for his demographic cohorts, too. “You will be seeing a lot of biophilic thinking and design coming very, very soon,” says Chua. “But it’s inevitable. People need nature. Nature doesn’t need people.”

The original version of this article appeared in Issue No. 168 of PropertyGuru Property Report Magazine. Write to our editors at [email protected].