Having shelved early dreams of emulating Billy Joel, Claude Touikan has shifted his focus on leaving an indelible mark on the future and changing the world for the better through his work at top Hong Kong architectural firm Lead8

While many individuals initially struggle to find their ideal vocation, Claude Touikan has never been one of those people. For him, architecture was a calling from a young age. It offered the opportunity to leave an indelible mark on the future, to change the world for the better. Even in his university days, the co-founder and executive director of Lead8, one of Hong Kong’s most sought-after architectural firms, knew that he wanted to shape the societal fabric and skylines of cities.

“That’s the only thing I’ve ever done in my life. I’d like to be Billy Joel, but it’s impossible,” Touikan says with a laugh. “What drew me into architecture was a very strange story. I went to the University of Prince Edward Island in Canada. I was cleaning the library one day and I saw a book on architecture, and that’s how it started.”

Nowadays, that dream of building skyscrapers is very much a reality. Since its founding, Lead8 has been at the forefront of Asia’s ongoing building boom. The firm has left its creative fingerprints everywhere from state-of-the-art international airport terminals to ambitious mixed-use developments and shopping centres that merge sophisticated AI with fully realised entertainment complexes.

The designs we create now will influence the future. It’s important that what we do is sustainable for the next generation. You feel better after you do this. You think ‘I did my best to save the world’

“We do not force our style on any project. Each project is unique,” Touikan says. “We do a great deal of exploration into the area and then we work within those parameters. We also really observe the surroundings—the people, the culture, and what fits for the area.”

Although pragmatism prevents the firm from adhering to a single aesthetic style, certain ideological choices are underpinning all of Lead8’s designs. For one, Touikan and his colleagues go the extra mile in terms of sustainability whenever possible. Part of this is simply because clients are increasingly demanding LEED certifications.

Most of it has to do, however, with the firm’s core belief that they have a moral responsibility to think of their environment. Strategising ways to reduce carbon footprints, incorporating recycled materials, reducing energy consumption, integrating foliage, and reusing water are all just part of the design process.

“The designs we create now will influence the future,” Touikan says. “It’s important that what we do is sustainable for the next generation. You feel better after you do this. You think ‘I did my best to save the world’.”

Indeed, several of Lead8’s projects currently in the pipeline are destined to remain with the world for generations. From a mixed-use district set to open in time for the 2022 Winter Olympics in Beijing to a sprawling airport terminal and one of the largest botanical gardens in China, these are spaces built to leave an impact.

Perhaps most exciting of all is a 23-kilometre loop around Victoria Harbour in Hong Kong. This would allow millions of office workers to cycle to work through well-ventilated tunnels, park their bikes in secure silos, grab a quick shower, then stroll into the office feeling refreshed and invigorated.

Much of Lead8’s commitment to building a greener future hinges on immediately practical solutions. Passive cooling technology, or strategically using natural ventilation, shading, and the positioning of the sun to reduce temperatures without air-conditioning, plays a key role in many of their projects.

“The cool season here doesn’t last very long, so air-conditioning tends to use up a great deal of energy,” says Touikan. “To minimise that, we do a site analysis to see where the sun is facing and where the wind comes in from, then orient our design around that.”

Yet, at times, the firm pushes the envelope further still. Although not every client has the resources to accommodate new technologies, Touikan makes a point of pushing for them when possible. If there is a chance to be at the cutting-edge of green tech, Lead8 wants to be there.

“The other aspect of sustainability is the innovation aspect,” Touikan says. “So, we’re trying to increase the number of electric charging stations for those who drive electric cars. It’s becoming part of our design process.”

That design process works since commissions for the firm keep accumulating. All of Lead8’s success relies on its reputation for producing feasible, logical, forward-thinking spaces. As they continue to do so, they are subtly changing Asia-Pacific, hopefully leaving it better for generations to come.

“It’s all through word of mouth. People see what we do,” Touikan says. “A lot of times, it’s about the philosophy of how we design and how we bring a concept idea into a reality.” 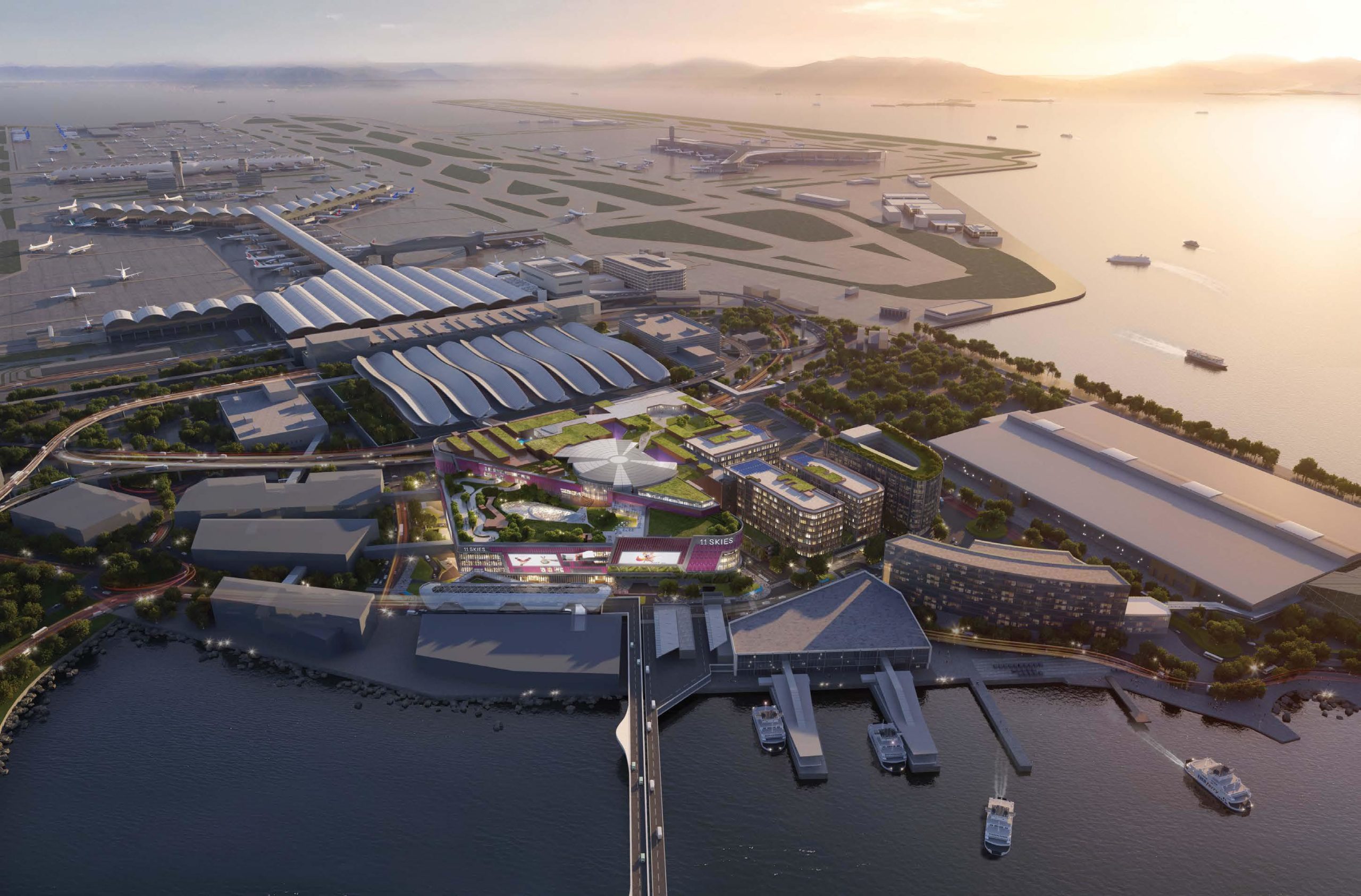 Once this sprawling multiuse complex near the airport opens its doors, it will offer 350,000 square metres of retail, entertainment and office space, making it the largest development of its kind in Hong Kong. Touikan envisions this space as much more than just another mall, however. “The phrase ‘shopping mall’, we want to delete it from the dictionary. It sounds very boring,” he says. Instead, he envisions an experiential-driven complex. “People shop online, but they go to a place. We need to meet other people, we need human interaction.” Consequently, 11 SKIES uses experiential elements to entice customers, while sophisticated AI technology constantly refines how retail spaces are laid out. 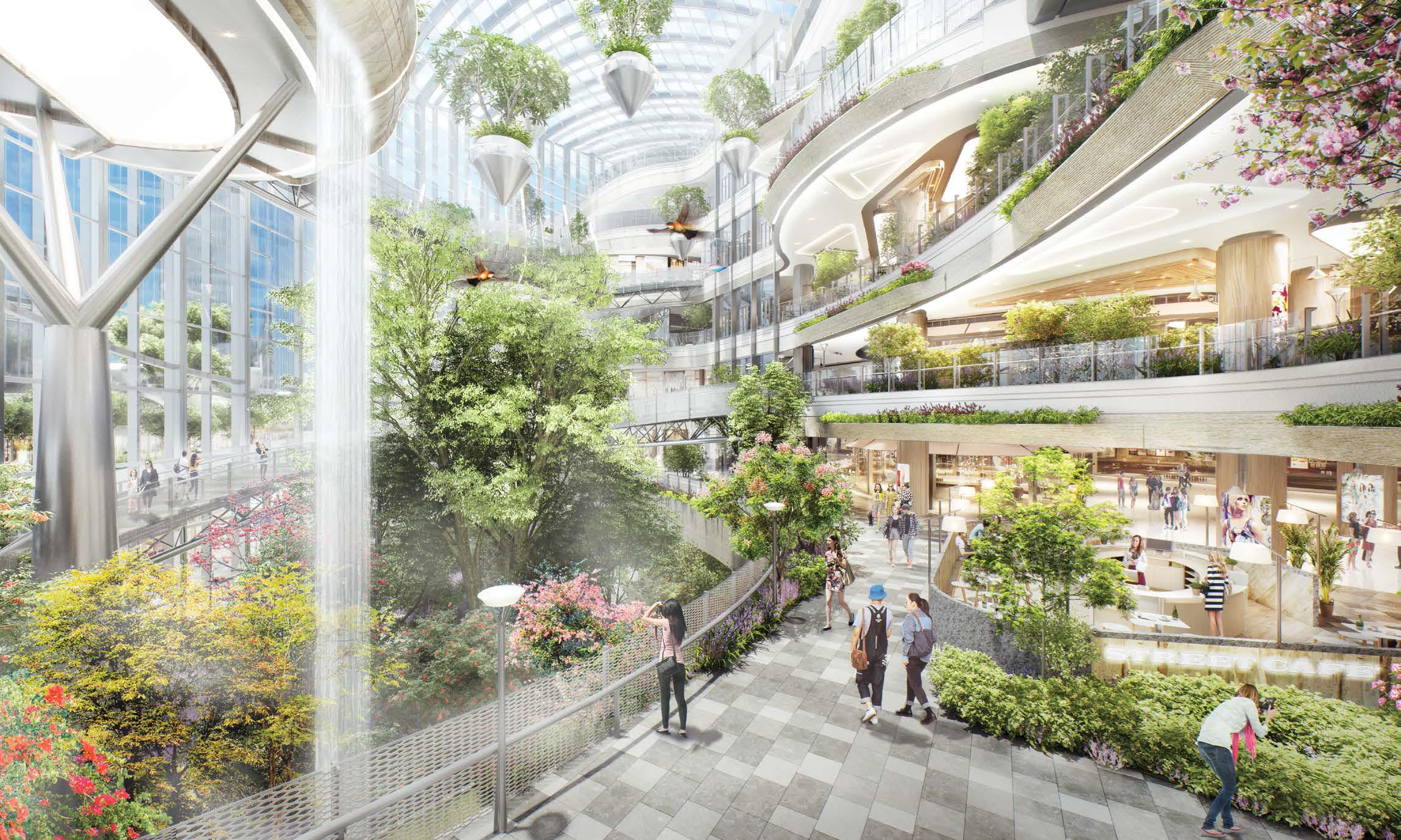 “Biophilic design is a controlled microclimate interior space, which you need properly designed sunlight to create,” Touikan says. “There’s controversy in this because designers sometimes say that nature belongs outside. In China, however, it makes a great deal of sense, because the pollution in many parts of the country is still very bad.” To bring greenery indoors in this seven-storey mall, Lead8 designed a spectacular 42-metre-tall botanic garden occupying a full 6,000 square metres and featuring more than 70,000 plants from over 300 species. Once completed, the indoor botanic garden will be one of the largest in the nation. “I enjoyed the High Line in New York, which brings people together,” Touikan says. This ambitious 23-kilometre walking and cycling pathway around Victoria Harbour would be Hong Kong’s equivalent. “We spend a lot of time working on it, but I believe this is our corporate social responsibility. We all deserve to be able to live a healthy life.” Lead8 is also proposing a walking bridge from Hong Kong Island to Kowloon. “We talked with engineers and it made the most sense to do an underground walking and cycling tunnel,” he says. “So, this loop would be well-ventilated and you’d get your exercise. We estimate that roughly 2.5 million people would be able to access this harbour loop.” 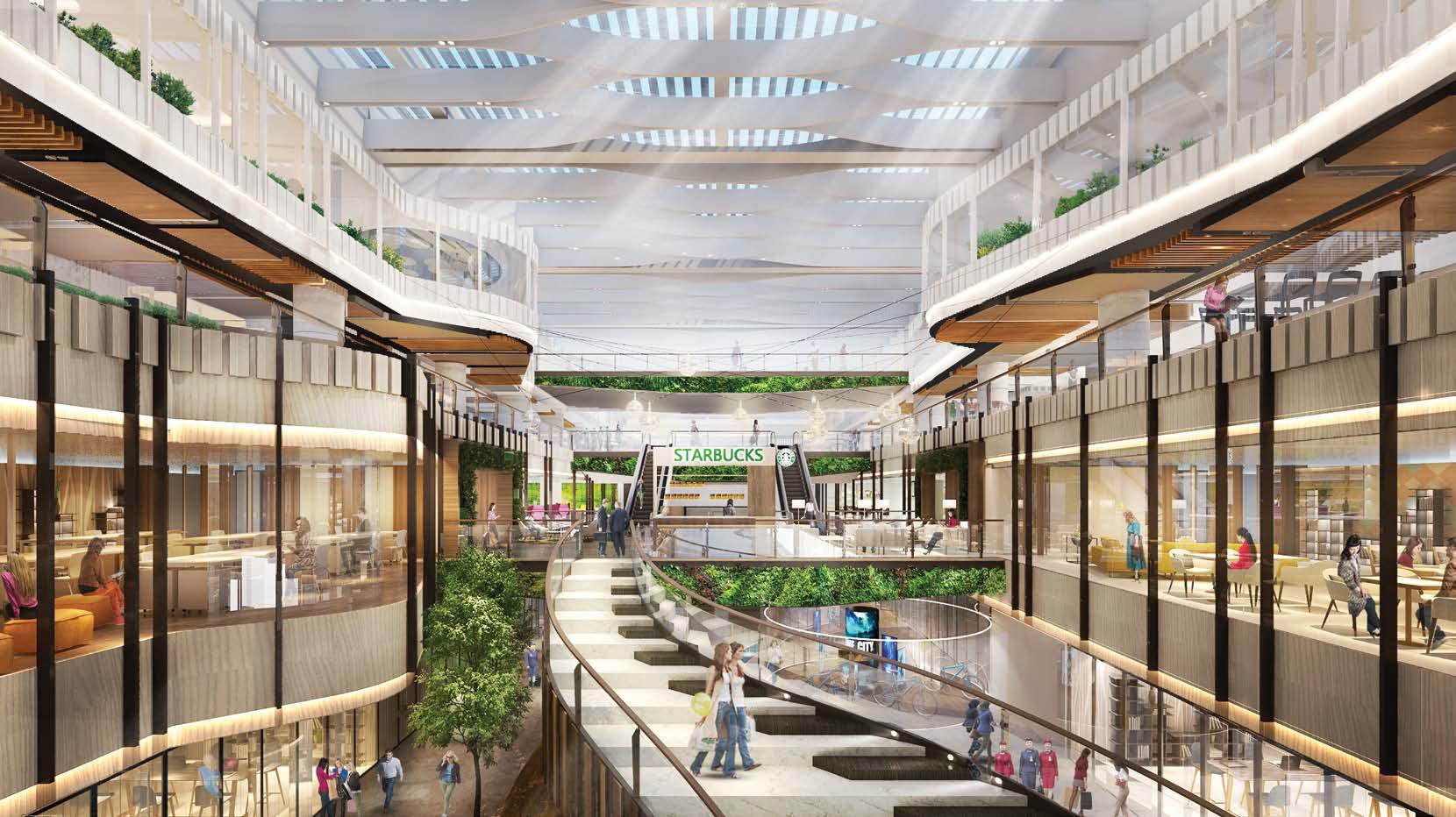 As air travel evolves in our ever-more interconnected global economy, so do airports. Once completed, this essential transportation hub will help the airport expand its capacity by 100 million anticipated passengers. While the airports of yesteryear might have been simply a place to park, this seamlessly integrated shopping, dining and entertainment facility is a destination in and of itself. There will be workplaces for executives to take calls and answer emails during their layover, as well as everything from nurseries for children and pet hotels for pampered pooches. A high honeycombed ceiling allowing for abundant natural light give the space a bright, modern feel. 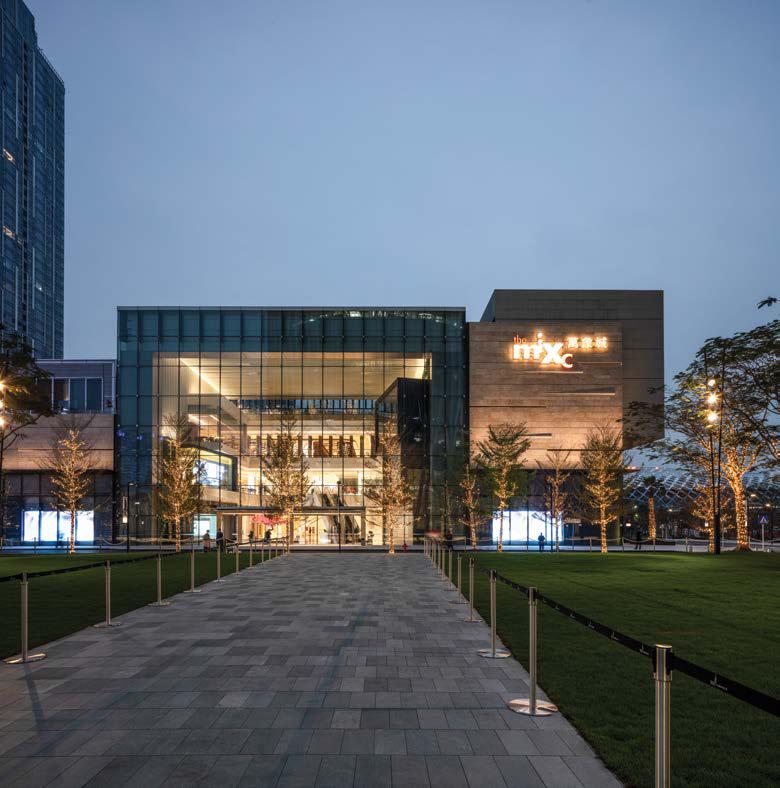 “At the beginning, the client wanted a huge glass roof,” Touikan says. The client’s vision involved turning a cinema into a true destination, complete with first-class lounge VIP vibes. While that enormous skylight might have looked impressive, it would have also converted the whole structure into a greenhouse in a tropical climate. To make the building more energy-efficient, Touikan proposed a more practical, yet equally aesthetically appealing alternative. “In the end, we created sculptured landscaping skylights,” he says. “So that allows for a better-controlled environment that is producing less glare and second, you save a lot on electricity bills.” 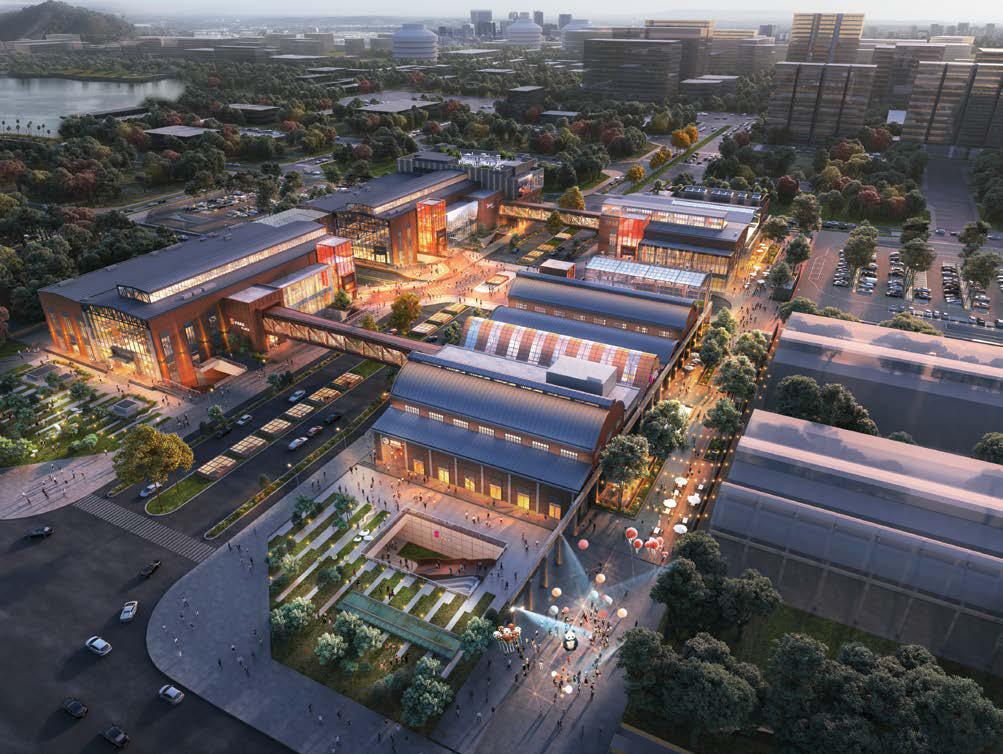 “For that one to be sustainable is easy—we’re recycling buildings!” Touikan says of this bold masterplan designed to open by the 2022 Beijing Winter Olympics. “Since it used to be a steel factory, they have very good frames.” Once completed, the plan will fully transform the century-old Capital Steel Factory Park into a vibrant urban space. While the overall feel will be decidedly modern, elements of the original brickwork and columns from these heritage buildings will help give the development a sense of place and honour its role in the history of the capital. “It will recoup a lot of the existing steel buildings and turn them into multifunctional spaces that people can use for everything from dining to entertainment,” he adds.