As the name of his practice, Transform Architects, suggests, Thien Duong is taking a proactive and sustainable approach to redefining the design landscape in Vietnam 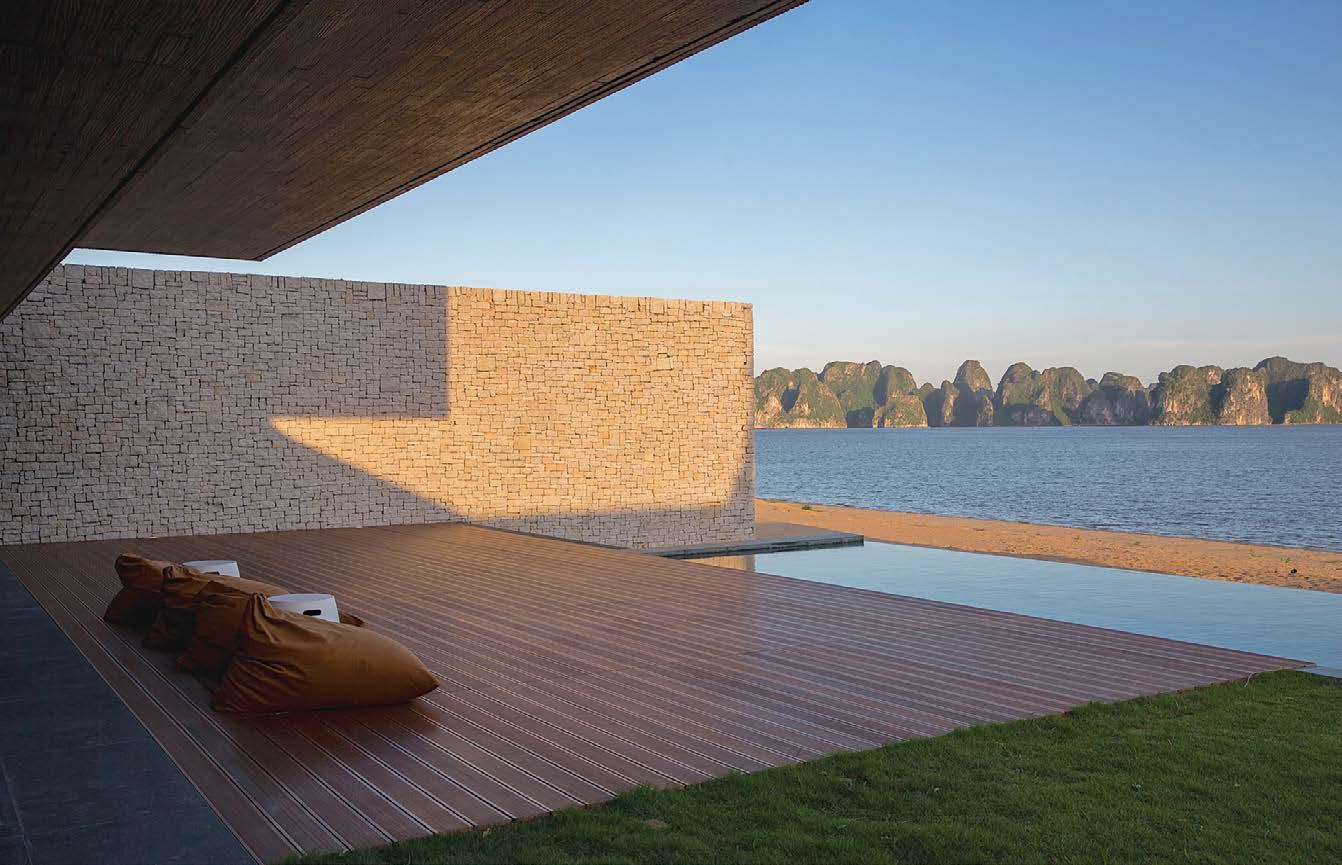 Thien Duong knew from a young age that he wanted to change the world. As a university student, he obtained degrees in environmental science and architecture through an innovative program of the University of Waterloo.

While some architecture students spend their days in classrooms, Duong spent every other semester practicing his trade at architectural firms in Italy, Bermuda, Norway, and Canada. By the time he graduated, he had strong foundations in western architecture and a deep-rooted belief in the ability of sustainable design to reshape urban spaces.

“I realised early on I wanted to be able to influence my environment. I was drawn to architecture because of the wide experience of what constitutes a built environment. There’s a greater contribution to society,” Duong relates. “Being a stock analyst or accountant just does not have the same effect.”

After graduating, Duong moved to London, where he worked under renowned architect Michael Aukett, who was nearing retirement at the time. The opportunity to hone his craft under the tutelage of a legend gave Duong an intense appreciation for the subtler details of the profession. Yet as much as he admired the rational nature of traditional English architecture, after obtaining his licence from the Royal Institute of British Architects, he knew his calling was elsewhere.

Duong had immigrated from Vietnam to Canada as a child but has remained fascinated by his homeland. As an architecture student, he returned to Vietnam to research his thesis and saw a country on the cusp of transformation. Ho Chi Minh City was a stark contrast to the other cities in which he had worked, which were all fairly developed with little room for growth or innovation.

I was drawn to architecture because of the wide experience of what constitutes a built environment. There’s a greater contribution to society. Being a stock analyst or accountant just does not have the same effect

Ho Chi Minh City had been all but ruined by the Vietnam War and the decades of economic hardship that followed. When he visited in the early 2000s, Duong saw a city with a growing economy, room to build, and a hunger for the new.

“When I came to Vietnam 20 years ago, I saw the country and this need to develop and to do so in the best possible way,” Duong says. “Before the war, Ho Chi Minh City was more developed than Seoul. It was a jewel of Asia,” he relates. “I saw the opportunity and what it could be. That was the vision.”

By 2005, two years after moving to Ho Chi Minh City with a British firm, Duong founded his own: Transform Architects. As the name implies, the company is committed to reshaping the future of the evolving country; even small designs are seen as opportunities to advocate for sustainability and innovative design.

“When we tackle every project, no matter the size or budget, we aim to leave a lasting legacy, to create something iconic,” Duong says.

This outlook has driven Transform Architects to become one of the leading firms in Vietnam, with their influence found everywhere from luxury resorts and high-end residential developments to schools and mixed-used office blocks. Because Vietnam’s building boom is still so new compared to some of its neighbours, Transform Architects has become a veteran of the design scene in a mere 15 years.

Part of Duong’s passion lies in minimising the environmental impact that inevitably accompanies rapid development. As a member of the Board of Directors on the Vietnam Green Building Council, a non-profit organisation connected with the World Green Building Council, he has spent a better part of a decade fighting to build a more environmentally sound future for his country.

“We have support internationally, but at the same time, we’re constantly encouraging the government to push sustainability in projects. As a country, I’ve seen our canals polluted, but now the rivers are being cleaned up,” Duong says. “Obviously, all this construction creates a great deal of pollution. Vietnam has a long way to go in order to be truly sustainable, which is why we always try to push green building.”

By incorporating greenery, relying on local materials as much as possible, and utilising passive design strategies that use natural shading, sunlight, and airflow to maintain a comfortable temperature in buildings with minimal use of fossil fuels, Transform Architects consistently strives to design buildings that are kinder to the planet. Each project proves to other Southeast Asian architecture firms that green buildings can be both beautiful and cost-effective. Little by little, it is a philosophy that is changing the world. 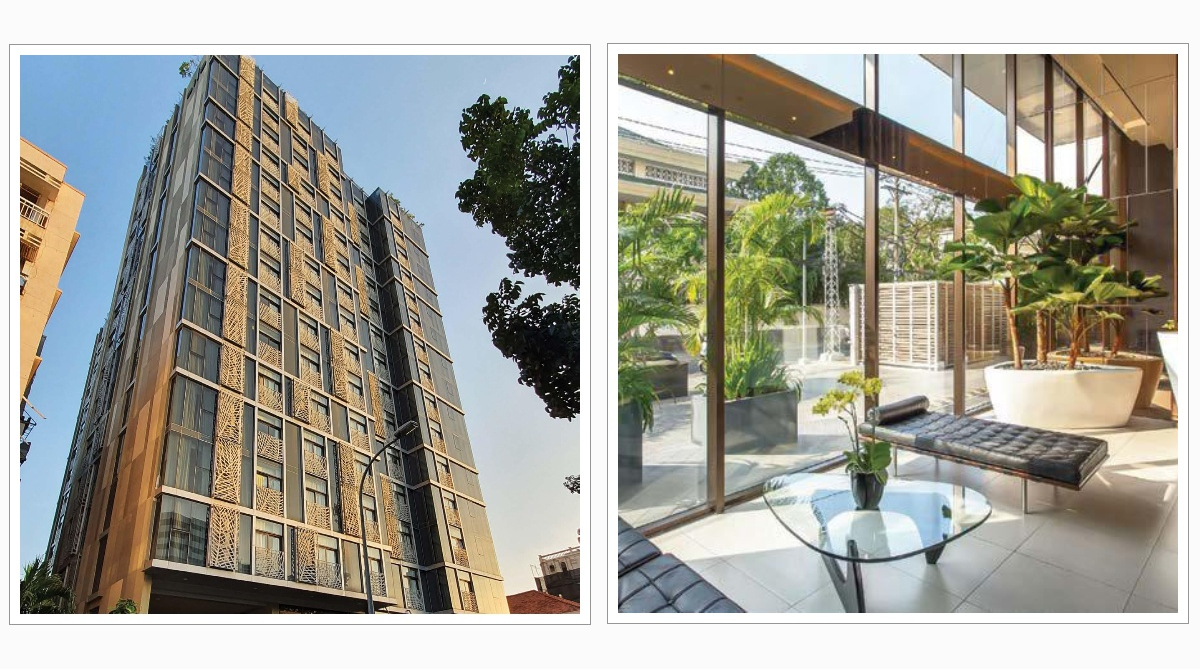 “Sila Urban Living is in the very centre of Ho Chi Minh City in District 3, which is very densely built around post-war buildings,” Duong says. “We designed the facade with aluminium panels, which we cut to show abstract patterns of palm leaves. We tried to create a resort feel in a very small space. As you enter, you have this cascade of water and this recurring motif of palm leaves evoking tropical plants.” In this case, form follows function: the decorative panels hide unsightly air-conditioning units, provide critical shade to cool the building, and act as screens for the Juliet balconies in each of the rooms. 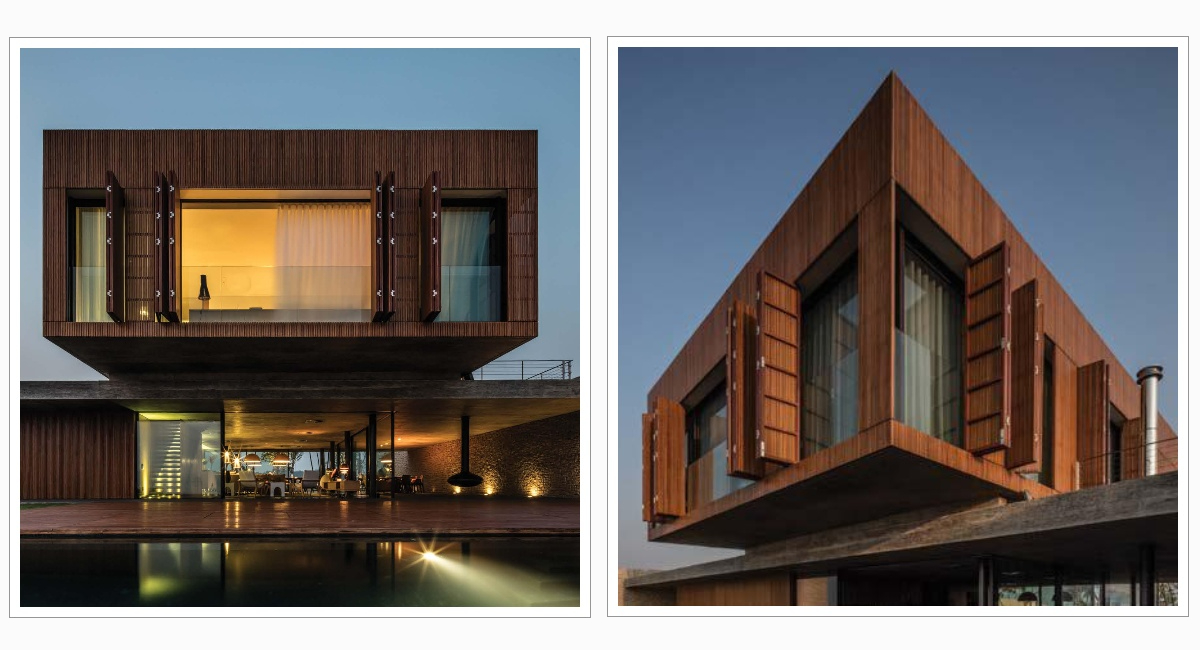 Once completed, these 18 villas on an island in Ha Long Bay will be among the most luxurious residential properties in Vietnam. “It has one of the most majestic views of the UNESCO World Heritage Site. These houses are designed to frame the views of Ha Long Bay and the limestone karsts jutting out of the water,” Duong says. Low ceilings and a minimalist, concrete skeleton provide the illusion of peering out at that jaw-dropping view through a picture frame. It’s no surprise the one completed villa is already a popular film set and wedding destination. 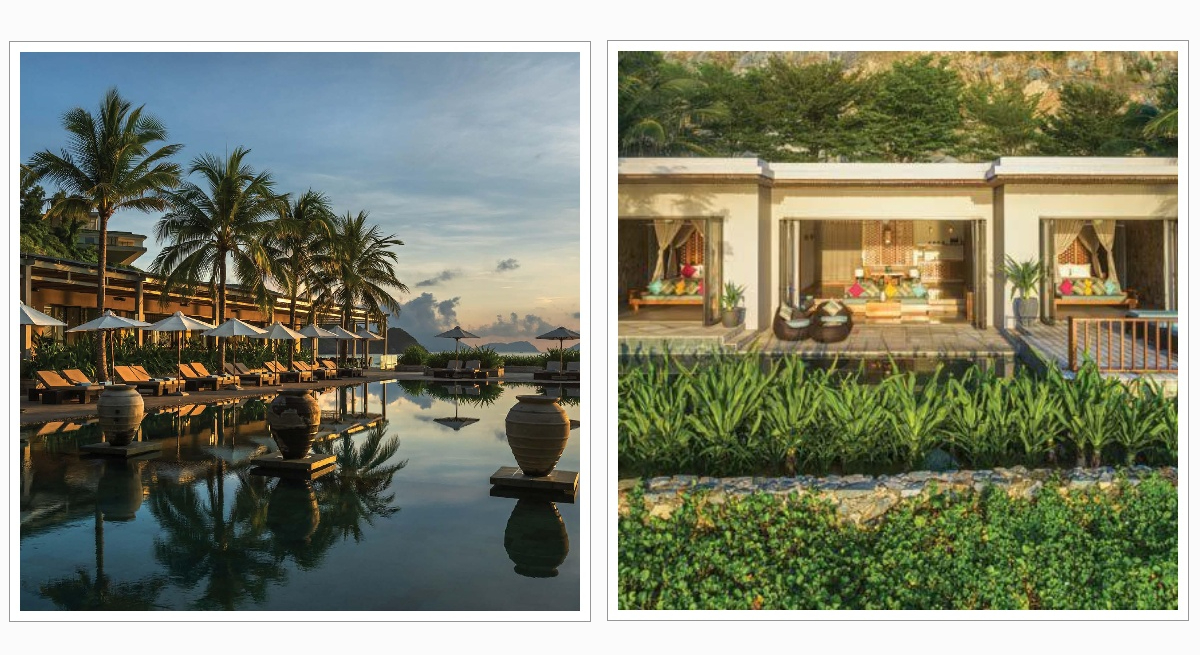 “When I came to the site, it was full of gravel because they had exploded part of the mountain and dumped all that rubble down the hillside,” Duong informs. Rather than discard the granite, Transform Architects incorporated it into the interiors of the resort, dramatically reducing building costs and the construction’s carbon footprint in the process. “Part of sustainability is not to waste fuel and energy importing materials, and utilising local materials where possible.” By planting grass on top of the rooftops, the firm created a building that integrated seamlessly into the landscape with time. “The resort has been around for almost 10 years and by this time it’s completely camouflaged. It’s not there to be flashy; it’s there to merge into the landscape we created. Plants are basically in control. You see the power of nature in the design itself.” 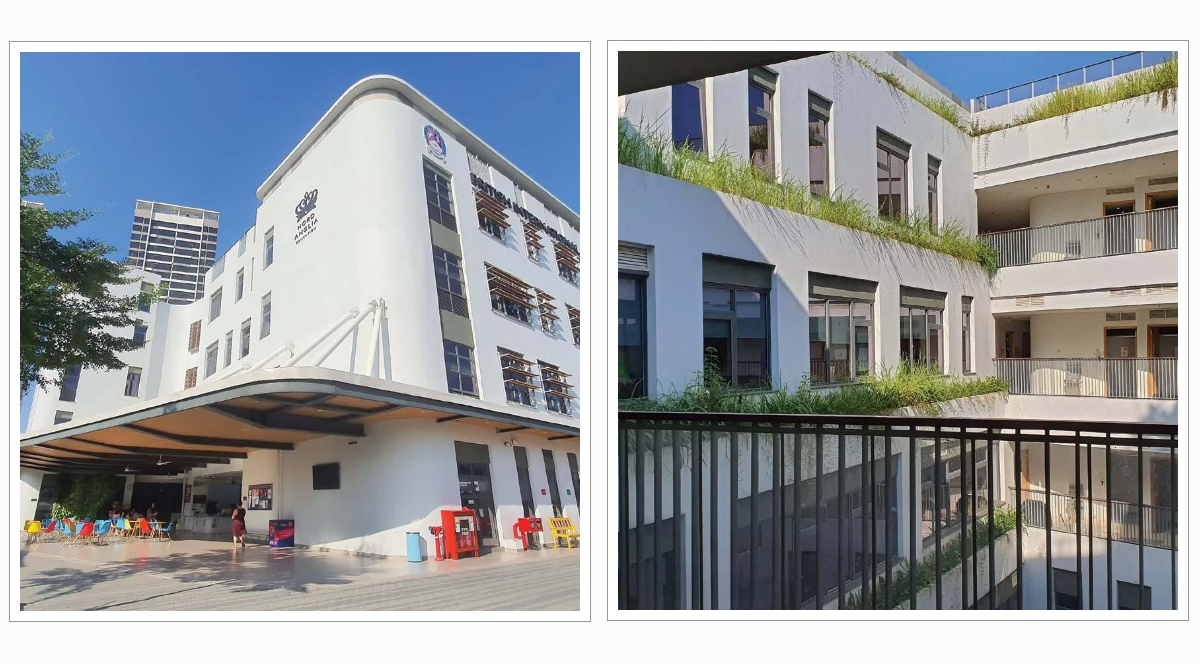 “That building is very sustainable in terms of energy efficiency. We carefully developed a shading strategy, in order to maximise views while minimising solar heat,” Duong says of the school, the first of its kind to achieve a LOTUS rating for eco-credentials. “It has a huge courtyard in the centre of the building so the actual basements were used as a swimming pool, a canteen, and a play area. It doesn’t feel like a basement, because you have these big open steps that allow prevailing winds to brush up, so the place is naturally cool. We generally use passive design, which costs nothing. It’s all about essentially creating quality of space in the most cost-effective manner.” 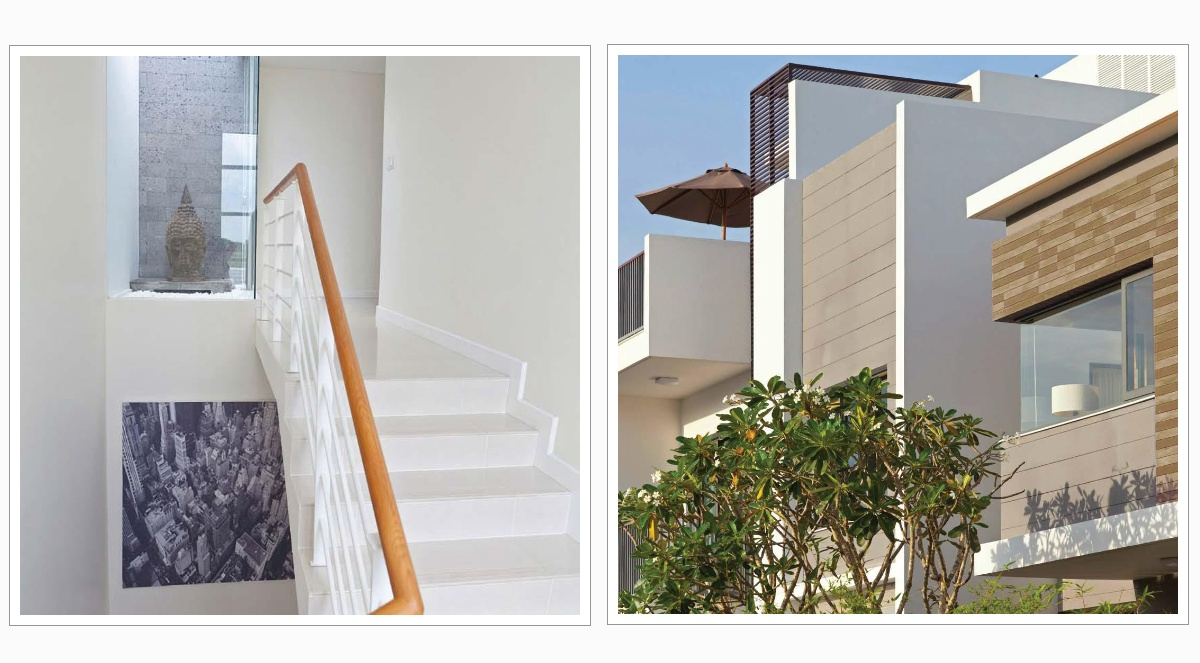 Located a half-hour boat ride from downtown Ho Chi Minh City, these residential villas are emblematic of the contemporary tropical style. “The buildings were designed with Asian living in mind: there are the wet and dry kitchens, and space to dine al fresco,” Duong says. “It’s a simple villa, but integrates the external landscaping and garden with the interiors. There’s a very clear relationship between both, which encourages people to live within the garden and out. We’ve employed passive design throughout and used trees for shade where possible.” 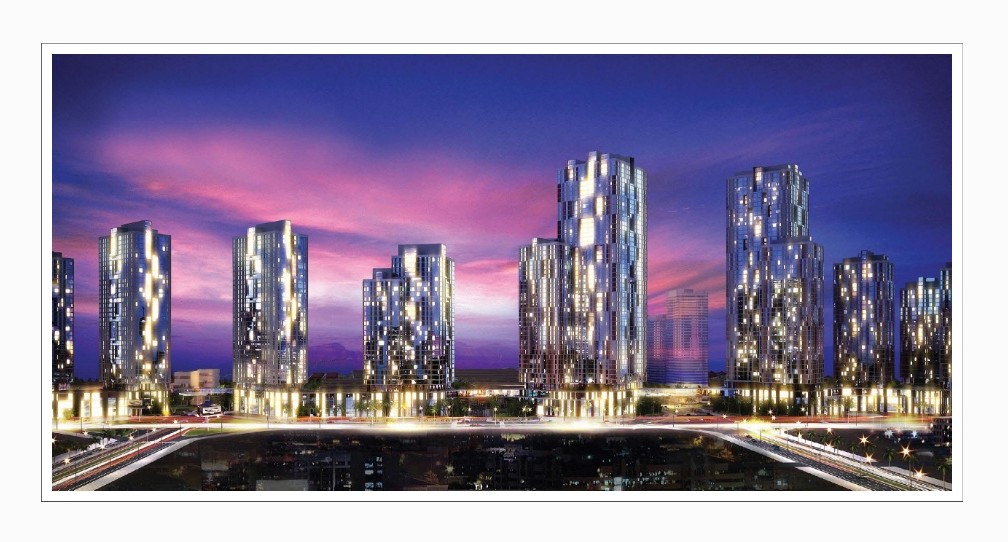 When Transform Architects designed this mixed-use development over a decade ago, it was among the largest projects of its kind in Hanoi, with each of the nine towers looming over the skyline at 50 storeys. “The project was meant to be a landmark development to help revitalise the area,” Duong says. “As the whole area was once known for the old silk trade, the buildings were built with aluminium cladding panels to give the illusion of shimmering silk. You can’t create a building with such a dynamic facade using a copy-pasted blueprint. This one was really a challenge and more of an artistic expression.”

This original version of this article appeared in Issue No. 163 of PropertyGuru Property Report Magazine