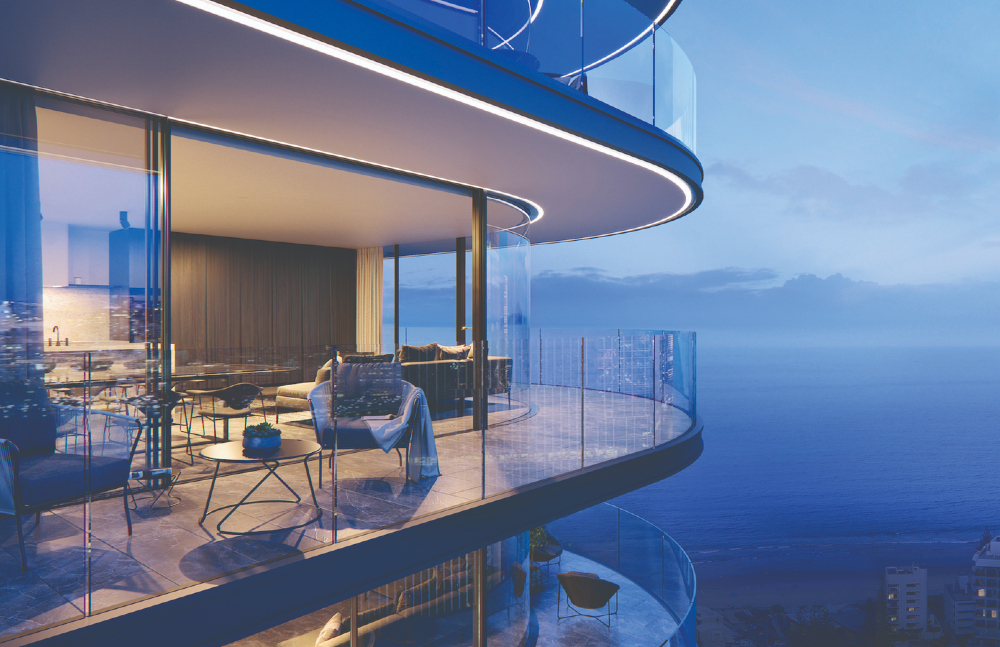 Since 1997, Plus Architecture has been steadily proving itself to be a force to be reckoned with in Australia’s design scene.

The firm started exclusively in Melbourne’s residential market. But in subsequent years it has branched out to an impressive range of projects throughout Australasia.

Today, the company’s portfolio encompasses everything from commercial workspaces to ambitious mixed-use developments to wellness facilities. It has even collaborated with the likes of international architectural heavy hitters like Zaha Hadid and Kengo Kuma.

“This year marks our 25th birthday. During that time, we have grown to have eight offices,” says Jessica Liew, director of Plus Architecture’s Melbourne office. “We have a strong presence in New Zealand and Australia. Much of the growth happened in the last five years. It all happened very quickly and organically.”

As Plus Architecture’s first female director, Liew has been influential in overseeing the firm’s recent explosive trajectory. A natural polyglot who is fluent in both Cantonese and Mandarin, she has been an asset in reaching out to the Asian market, as well as catering to the Asian expat investor community in Australia and New Zealand.

According to Liew, Plus Architecture’s decision to expand beyond Melbourne was a necessary survival strategy for building a more robust future for the company.

“We have learned lessons from market downturns,” says Liew. “We wanted to spread our wings into other sectors. We have a lot of talent in the firm. And these guys needed room to grow. So they were able to open offices in other cities or states.”

That willingness to go boldly forth, both literally and figuratively, has served Plus Architecture well. Liew is proud of the firm’s ability to adapt to varied site specifications and client needs. “We believe in exploration and collaboration,” Liew says. “We don’t like to design with a signature style because it might not necessarily be the right answer to every site. We draw upon site context.”

Naturally, adapting to the site context often entails designing the most eco-friendly building possible. While some architectural firms go all-in on the latest bells and whistles—which may sound good in a press release, but not make a meaningful difference in the building’s overall carbon footprint or waste—Liew firmly believes in tried-and-tested sustainability strategies.

“Greenwashing can be a potential issue,” she says. “Figuring out what has a positive impact can be complex—you must factor in lithium mining and production and all sorts of supply chain issues. I understand a lot of others push for a lot of technologies and smart materials, but we always ask at what cost .”

We believe in exploration and collaboration. We don’t like to design with a signature style because it might not necessarily be the right answer to every site. We draw upon site context

To that end, Plus Architecture sticks to one of the most trusted options out there: passive design. In other words, every building goes through a daylight assessment to determine how to best maximise or minimise sunlight and natural cross-ventilation to maintain a comfortable internal temperature with minimal wasted electricity or fossil fuels. The firm incorporates solar panels whenever possible and encourages clients to steer away from inefficient gas heating systems.

“Although it’s quite an old-school principle, passive design is just so powerful, no matter how basic it is,” says Liew. “We want to be able to put our hand to heart and say this is the best product.”

That strategy of creative pragmatism is emblematic of Plus Architecture’s overall style. While many of the firm’s buildings are visually striking to behold, Liew prefers to create smart, usable design that will endure—an outlook very much in line with the prevailing attitudes Down Under.

As much as she admires dazzling starchitecture structures, she insists that the tastes and needs of the average Australian or New Zealander trend slightly more pragmatic.

“Architecture in Australia is not at the Norman Foster or Zaha Hadid level of extravagance,” Liew says.

Nevertheless, she believes that flair need not be sacrificed for the sake of simplicity. “A lot of the designs that we are doing here are still exciting,” she says. “Even the simplest buildings”

Much of this has to do with a general standard of excellence. According to Liew, there is an almost universal acceptance in the region of the idea that every building project—no matter the scale—is worthy of smart, savvy design. A healthy level of friendly competition drives everyone to do better.

“Everyone pushes as far as possible to create a great piece of architecture,” she says. “Everyone tries to excel. People push a lot of boundaries.” 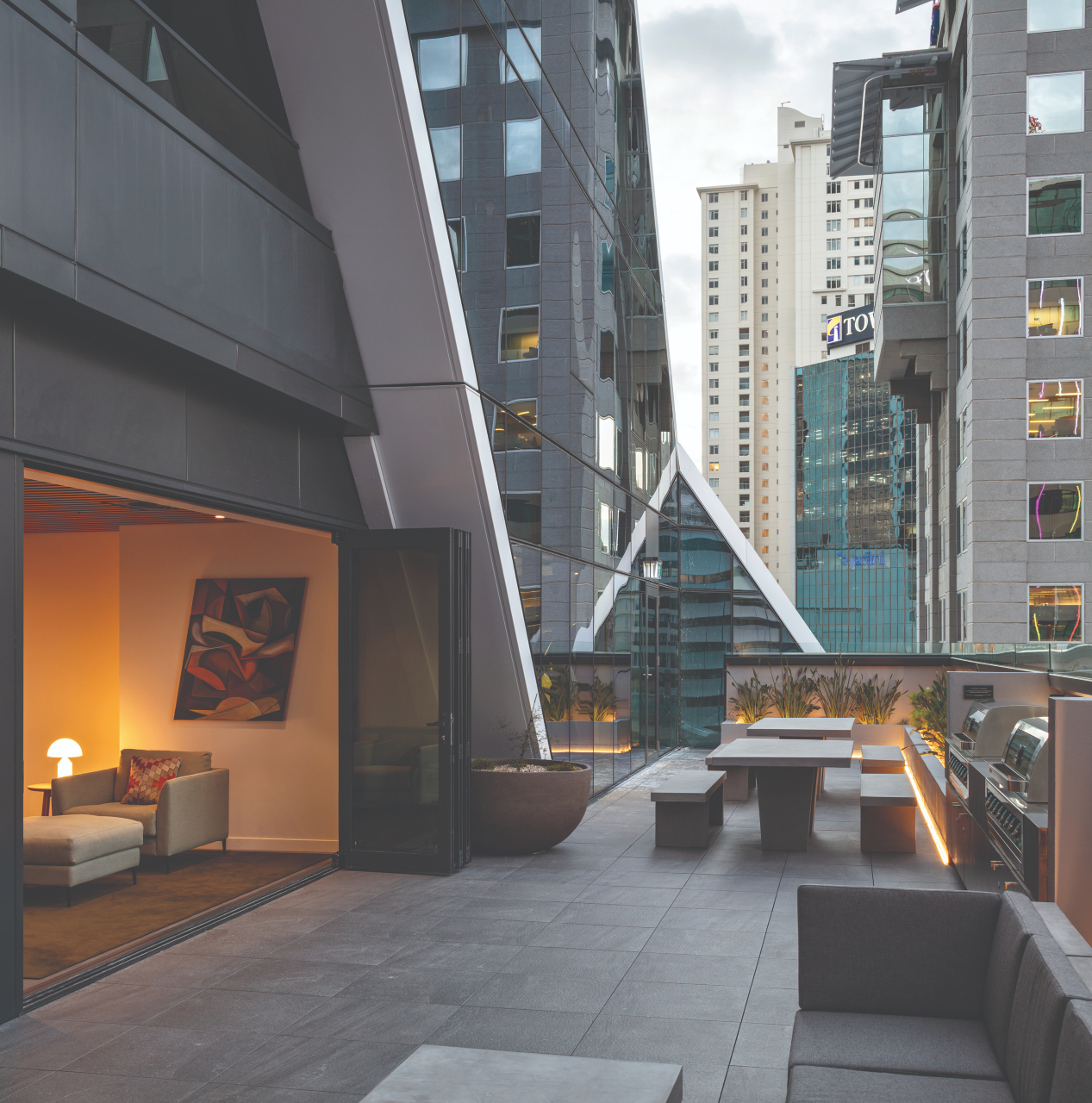 Towering over the heart of Auckland, this 178-metre structure is New Zealand’s tallest residential tower and is truly a sight to behold. It’s also home to some of the most luxe accommodations in the country, including a series of super-penthouses with jaw-dropping views. While the facade is hyper-modern, it also pays homage to the old warehouse and port district’s historic past. The angular designs slicing through the exterior mimic the patterns of the neighbourhood’s old laneways rendered vertical. To counter all the glittering glass and steel, the designers incorporated lots of warm, dark timber on the interior, as well as enclosed winter gardens on the upper floors. 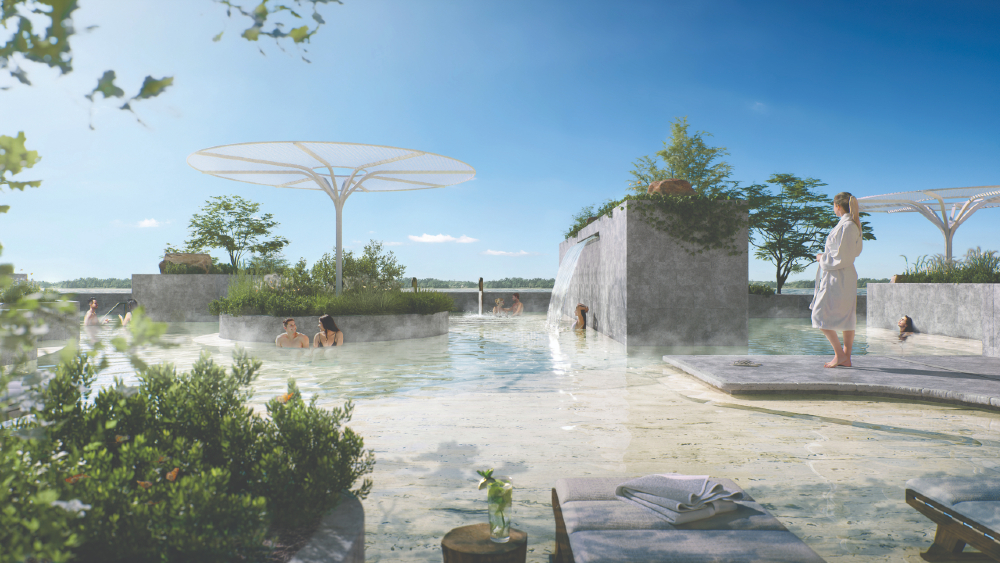 Once opened, this sprawling 4,000-sqm site located just outside of Perth will become one of Australia’s premier wellness destinations, complete with a host of saunas, pools, treatment rooms, and dining outlets. To take advantage of the facility’s stunning natural surroundings, the design team used the sloping site to accentuate the stellar views of the Swan River and incorporated local, found limestone into the plan. The team also tried to preserve as much of the original landscape vegetation as possible, in addition to incorporating sustainable design strategies such as the harnessing of geothermal energy. 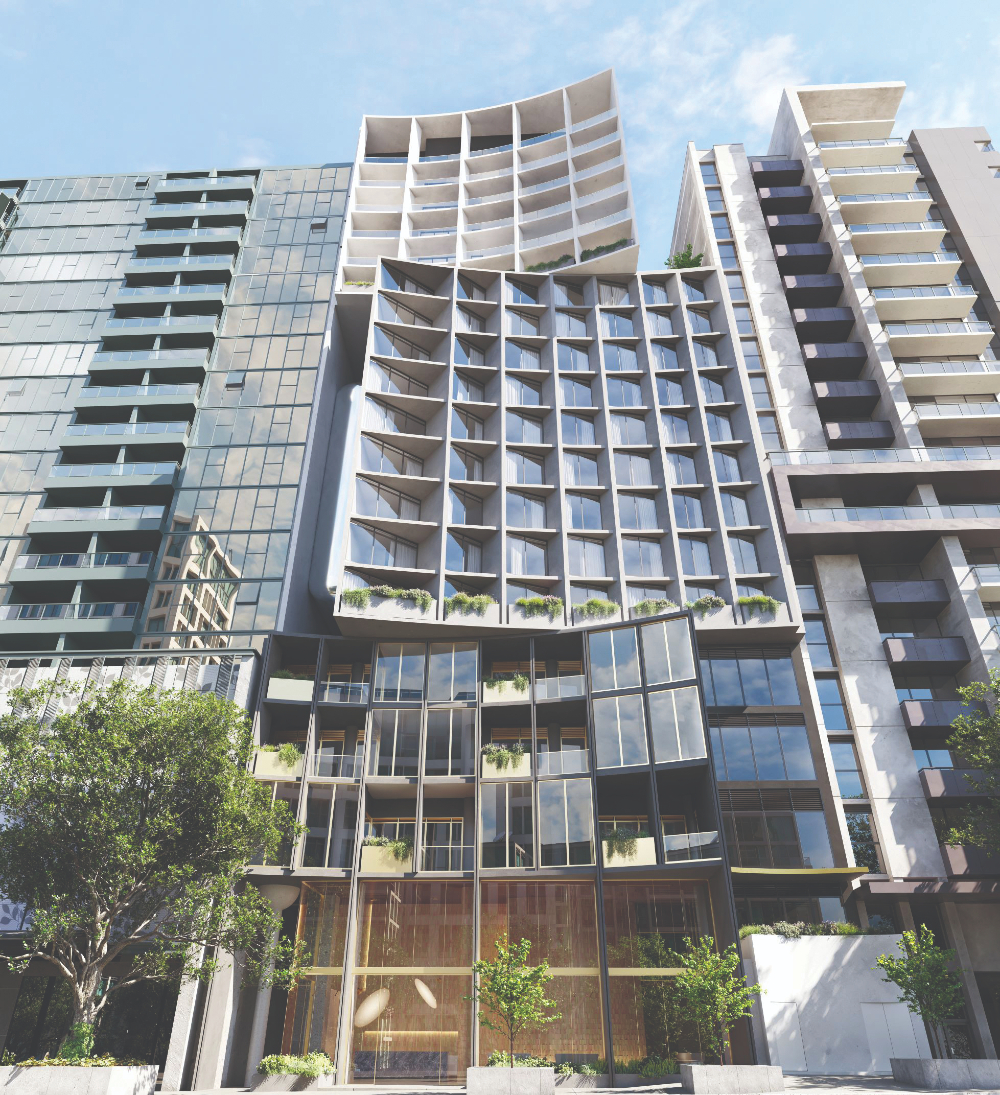 One glance at the striking facade of this 20-storey Melbourne stunner is enough to confirm that this is no average apartment building. One of the challenges of this site was the fact that it was situated between two tall buildings. “We didn’t want to create a sandwich tower, so we started investigating what else we can do to make that architecture fit into its context and converse with the neighbours,” says Liew. The resulting facade is filled with intentional recesses and open spaces, creating depth and movement. All the 171 hotel rooms in this mixed-use project overlook lush gardens, while the luxury apartments have a view of Port Philip Bay. 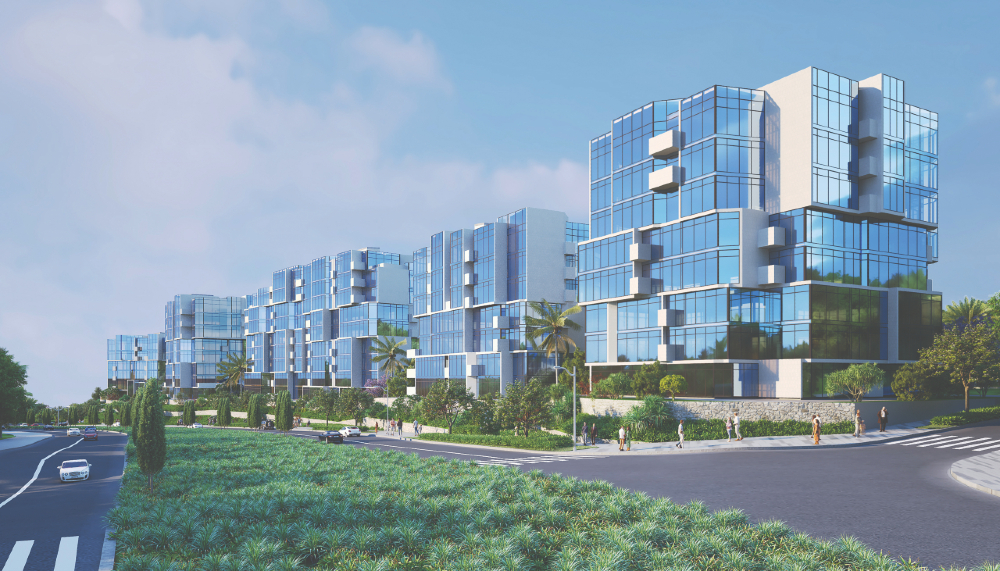 Consisting of seven glass-fronted residential towers, this bold project in Chongqing draws on the natural geology of western China for inspiration. Chongqing is built on an area that once experienced tectonic upheaval, resulting in jagged mountain ranges and rock formations stretching throughout the region. To mimic this, Plus Architecture envisioned eye-catching facades with cubic glass formations jutting out. Not only do they make for particularly dynamic structures full of movement, they also imbue the structures with a sense of place. Each building is unique and appears to have been frozen in a moment of expansion or upheaval. 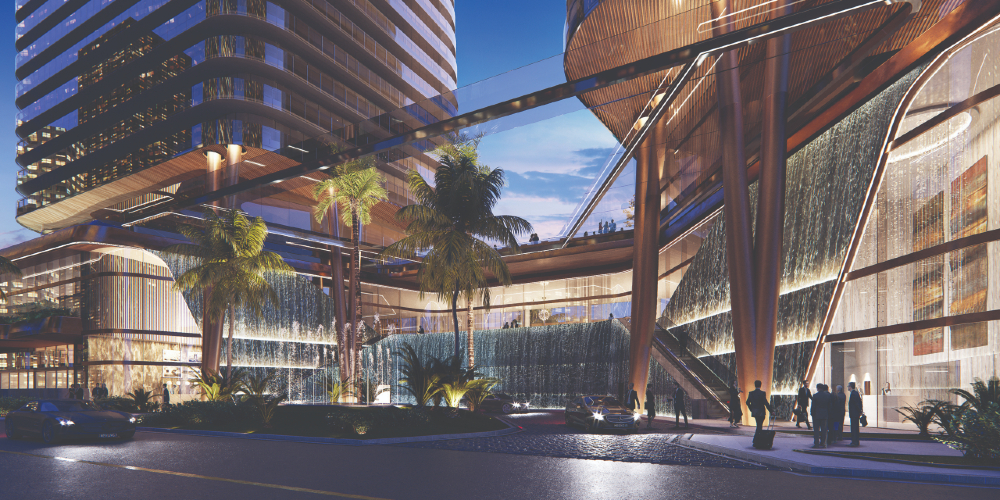 Nestled on the Nerang River, with unimpeded views of the Gold Coast and the Pacific Ocean, the two towers of this upscale residential project in Queensland are a sight to behold. To accentuate the water situated all around, Plus Architecture incorporated a series of reflection and infinity pools so that it would seem almost like the building is melting into the sea. Floor-to-ceiling windows and wraparound terraces in the upper-level apartments make the most of that cerulean panorama. Both towers twist slightly as they rise, creating a dynamic facade. Finally, the tastefully muted, earth-toned colour palette with bronze accents mirrors the nearby sandy coastline. 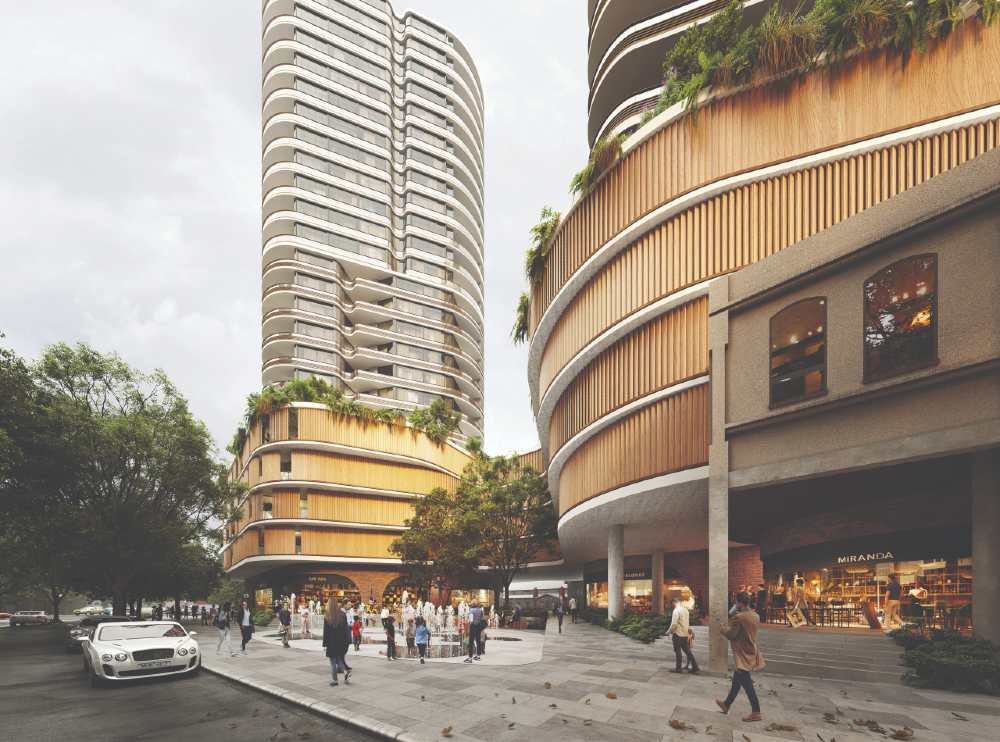 After winning a prestigious competition to help rethink and redesign the West End in Newcastle, Australia, Plus Architecture knew that they needed to come up with something truly visionary. The animating principle behind the firm’s concept was that of a public meeting place—a polis for a modern-day city. The project is also intended to help revitalise the district, bringing jobs and an influx of capital to help offset the economic impact of the global pandemic. Once completed, this landmark building will be home to 1,400 sqm of commercial floor space, as well as 267 residential units.