As China’s cities explode, its built heritage is often neglected. Hangzhou-based Bluetown Architects aims to redress that balance through its striking but functional work

When it comes to architecture, few countries are as wildly dynamic right now as China. Travel + Leisure once dubbed the nation’s flurry of development as the “biggest building boom in human history, surpassing the creation of the Pyramids and the Great Wall.”

Over the last decade, the blistering pace of development has seldom slowed, as vertiginous skyscrapers rise across mega-cities like Beijing, Guangzhou, Shenzhen and Shanghai, while second-tier cities race to catch up. For many older people, the skylines of today bear virtually no resemblance to the ones of their childhoods.

All the rush for progress and hyper-modernisation, however, has not been without its growing pains. As its cities have swelled, China’s divide between urban and rural lifestyles has widened to a chasm. Into this void, the country risks losing ties to cultural traditions and design styles with thousands of years of history behind them.

Bluetown Architects, based in the serene lakeside city of Hangzhou, has proven itself an advocate for forging China’s future while maintaining an eye on its past. Founded in 2014 by Song Weiping, the firm has a more holistic approach to architecture than many of its contemporaries. While most architecture firms are eager to secure their legacies with flashy, attention-grabbing edifices in metropolitan areas, Weiping prefers to create spaces that are genuinely comfortable for the people who call them home.

What are you doing to solve a real estate problem using technology?

Recognising start-ups who are revolutionising our industry. Entry is free.

It begins with you. Enter the PropertyGuru Tech Innovation Award.

“In the future, Chinese cities should be shaped by the residents living in them. Architects are too often divorced from reality in their quest to create buildings,” Weiping says. “We dispense with personal heroism and take measures according to local conditions to make life better for residents.”

A desire to shape the future of society for the better was what drew Weiping to architecture in the first place. When he was in high school, he remembers watching a film about an architect’s personal quest to make a positive impact. The concept was so powerful to him that he chose to pursue the field himself at the University of New South Wales in Australia. When he returned to China, he had a clear vision of the kind of mark he wanted to leave on his country.

“I think creativity is incredibly important. Architectural firms must be able to face the challenges of the era with innovative solutions,” Weiping says. “We also must find ways to create more of a balance between China’s cities and its countryside. Finally, I believe that we must remember to pay respect to both the local culture and the local environment.”

For Weiping, that translates to using local materials wherever possible. Part of this has to do with sustainability and cost—transporting pricey imported stone and wood around the world drastically impacts a project’s carbon footprint. It also helps ground each project with a solid sense of place. While many of the luxury developments cropping up around Asia Pacific have a certain generic sameness to them, Bluetown Architects’ designs feel connected to their surroundings.

“We want the countryside materials to be based out of local materials wherever possible, both for cost control and so that it mirrors the surrounding ecology,” Weiping says. “We believe that the natural environment and the local culture should be maintained as much as possible.”

Architects are too often divorced from reality in their quest to create buildings. We dispense with personal heroism and take measures according to local conditions to make life better for residents

Opting for regionally sourced materials and incorporating subtle aesthetic nods to China’s rich history results in striking buildings. Bluetown Architects has plenty of prestigious projects under its belt. Yet Weiping believes that the firm’s accolades are not what will cement its legacy. His vision for China’s future places just as much value on the lives of ordinary citizens as it does on the urban elite. As China’s population ages, he hopes to create community-oriented spaces for the elderly that will help families live happier, more harmonious lives.

“We hope to create healthier, more comfortable living environments. We also help ageing people have a better life,” says Weiping. “You know in China, a large family of maybe three generations lives together in the countryside. In China, in the spring festival, each family comes together, so the homes we design need to be able to accommodate grandparents and relatives.”

One thing is certain: The decisions that Bluetown Architects makes today will have a lasting effect on generations to come. The future of China is still unfurling, allowing those with a vision to manifest it in profound ways. 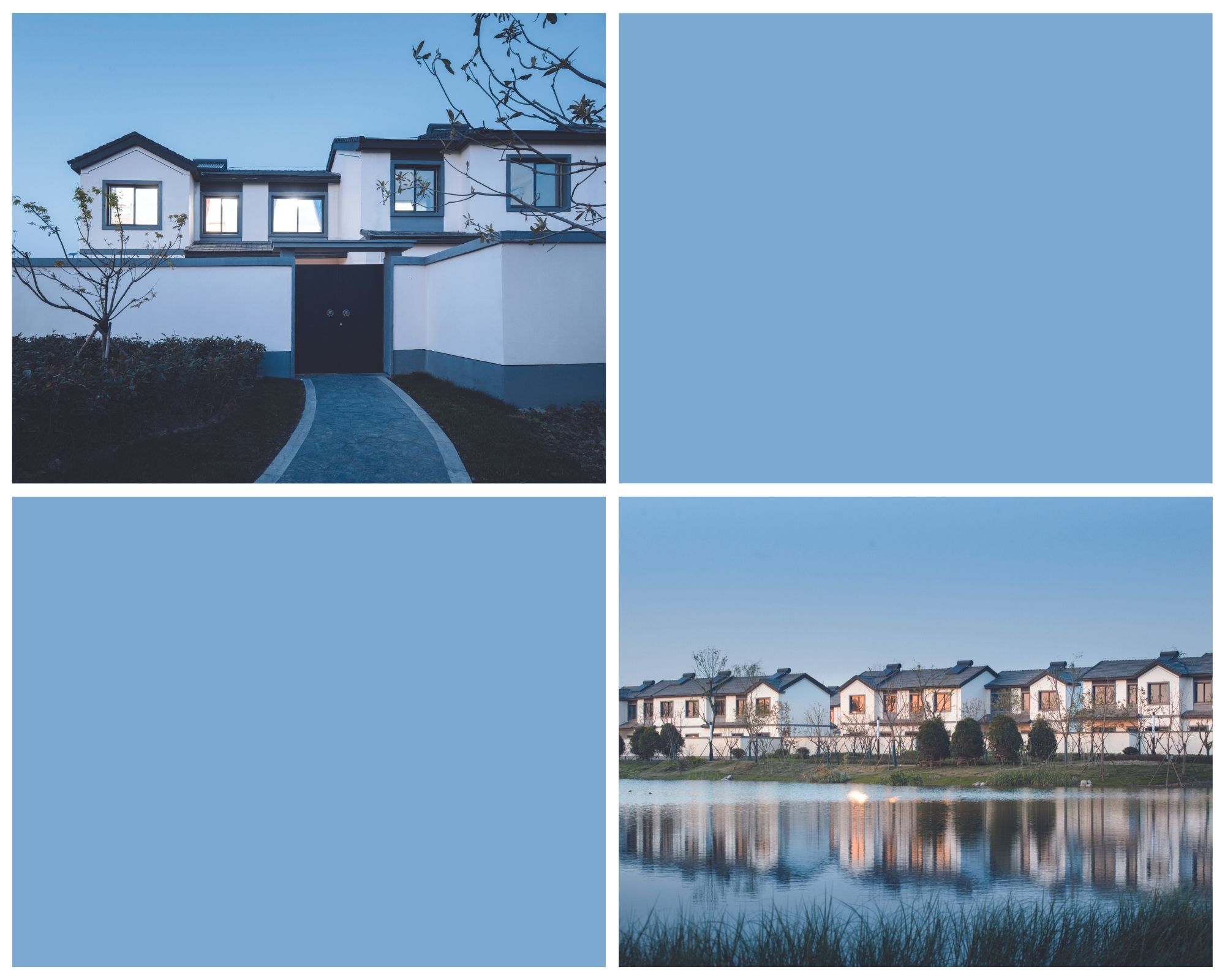 “We incorporate local cultural symbols to let the culture endure in this area,” says Weiping. One of the critical aspects of this project was that it needed to provide affordable, visually appealing homes for roughly 600 tenants. The resulting houses draw on traditional Northern Jiangsu architectural motifs including dark roof tiles and white gable walls while creating plenty of opportunities for community life to flourish. All the houses fall into a cluster design reminiscent of a historic village, complete with common outdoor spaces for vegetable gardens and social activities with friends, family, and neighbours. 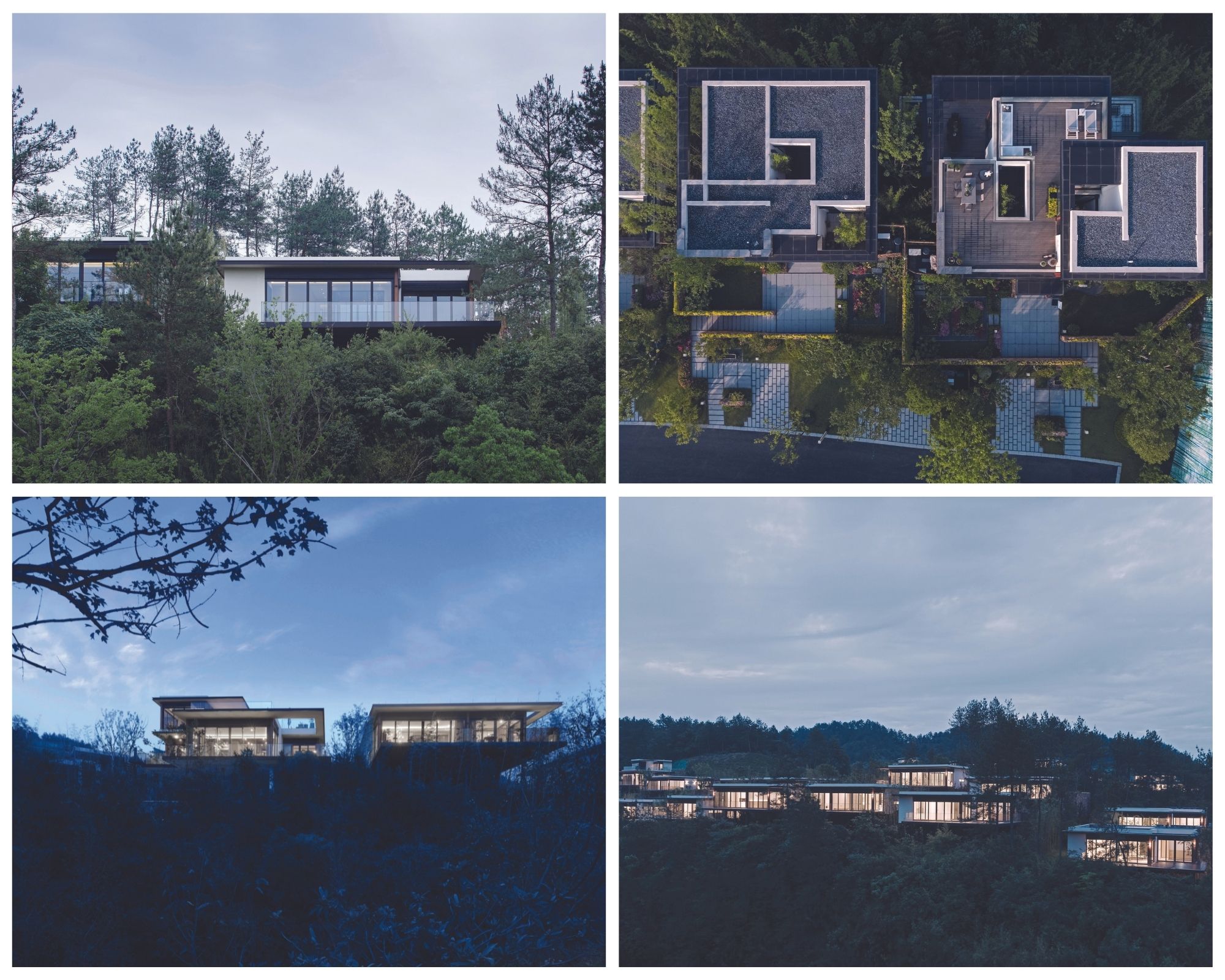 “The design philosophy for this project was to have the buildings hidden in the natural mountain surroundings,” Weiping says. With such scenery, it only seemed appropriate to let nature take centre stage. “So, it was a challenge to achieve these goals for the local landscape and to use the materials so that the buildings looked almost like birds flying through the mountains.” Although the clean linear forms draw on traditional Chinese architectural tropes, the floor-to-ceiling windows and geometric silhouettes give the villas a modern, minimalist feel. Spacious terraces overlooking the dazzling scenery add to the ambience. 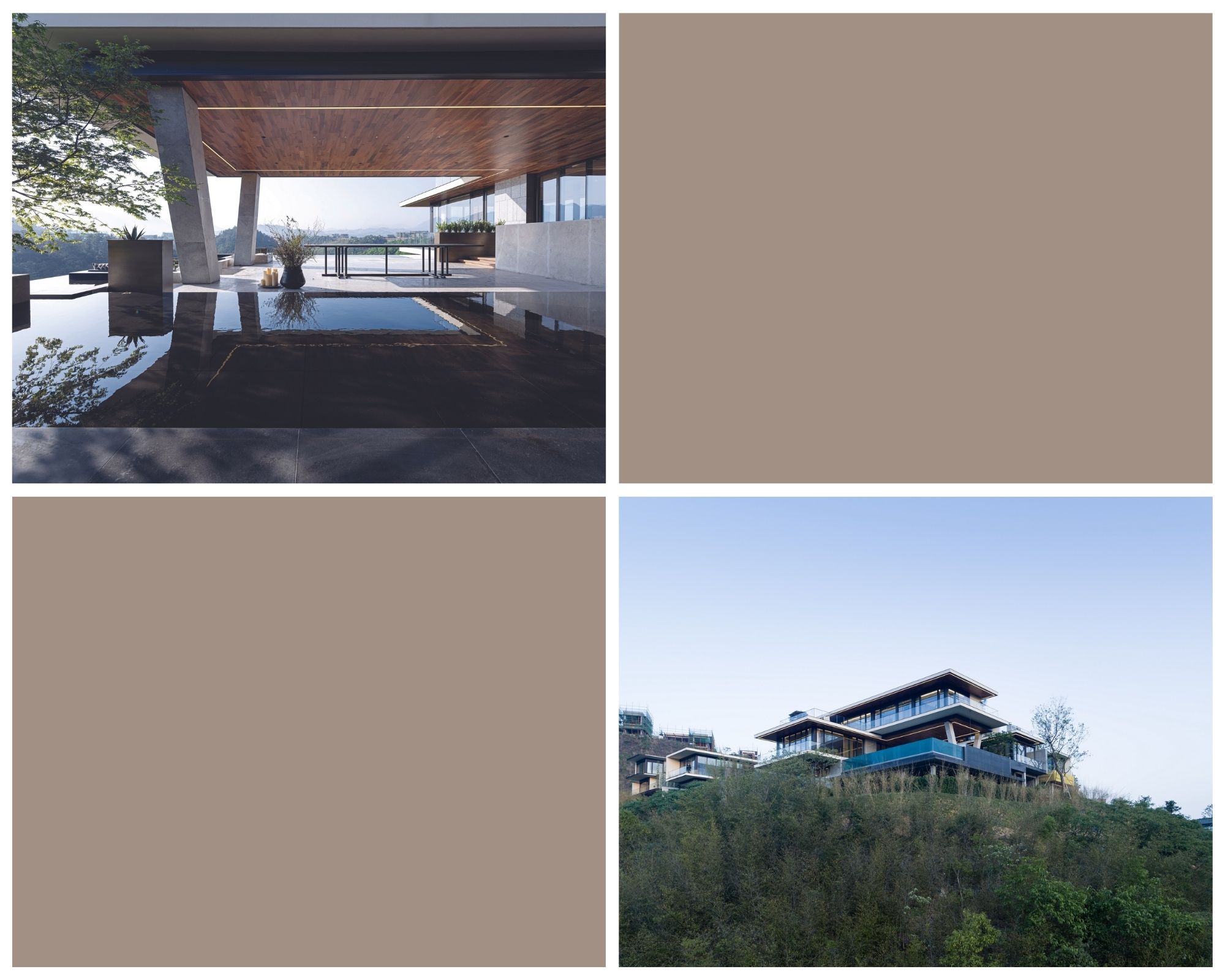 “They’re modern villas, but the lines between the buildings and the use of light reference traditional local architectural styles,” Weiping says. As with the other Peach Blossom Future Villas, this project serves to spotlight its surroundings through the use of glass, light, and the reflective properties of water. With infinity pools, statement water fixtures, and palatial interiors, these villas are a luxe marriage of both the past and present of Chinese architecture. The result is simple yet undeniably stunning. The clean, geometric forms give the villas a timeless quality that only serves to enhance the richly textured local materials.

The Community Centre of Guanyun in Deqing 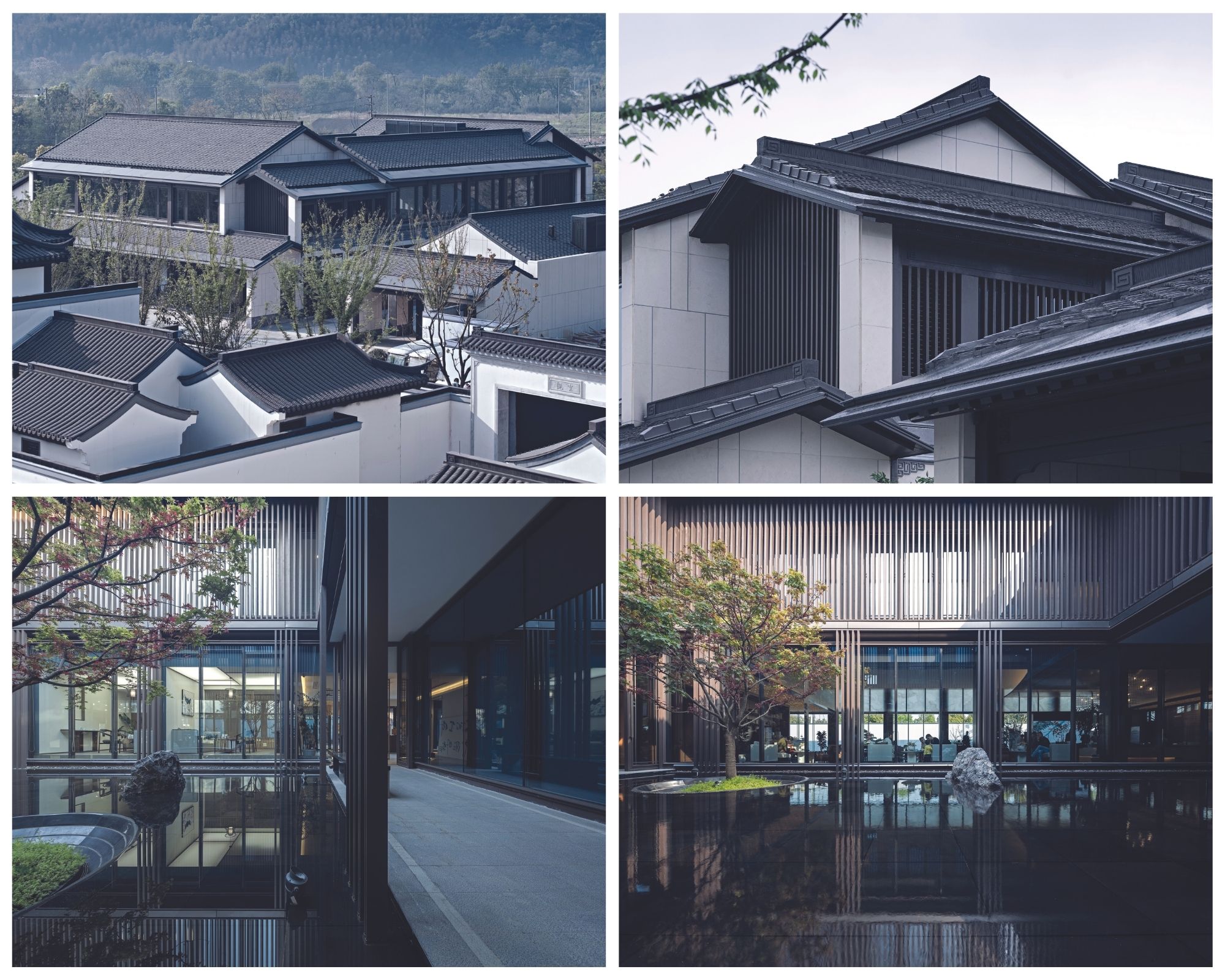 “In this community facility, we have a direct connection with the hospitals, so that elderly individuals have immediate access to high-quality medical care,” says Weiping. Ensuring that doctors can quickly reach residents in case of an emergency allows for greater peace of mind for everyone in the community. In addition, Weiping says he wanted to provide locals with everything they needed to stay healthy without medical intervention. Top-notch fitness facilities onsite help encourage elderly individuals to stay physically fit, while group tai chi and other activities help stave off loneliness. The concept of the project was to help China’s ageing population not just live but live well. 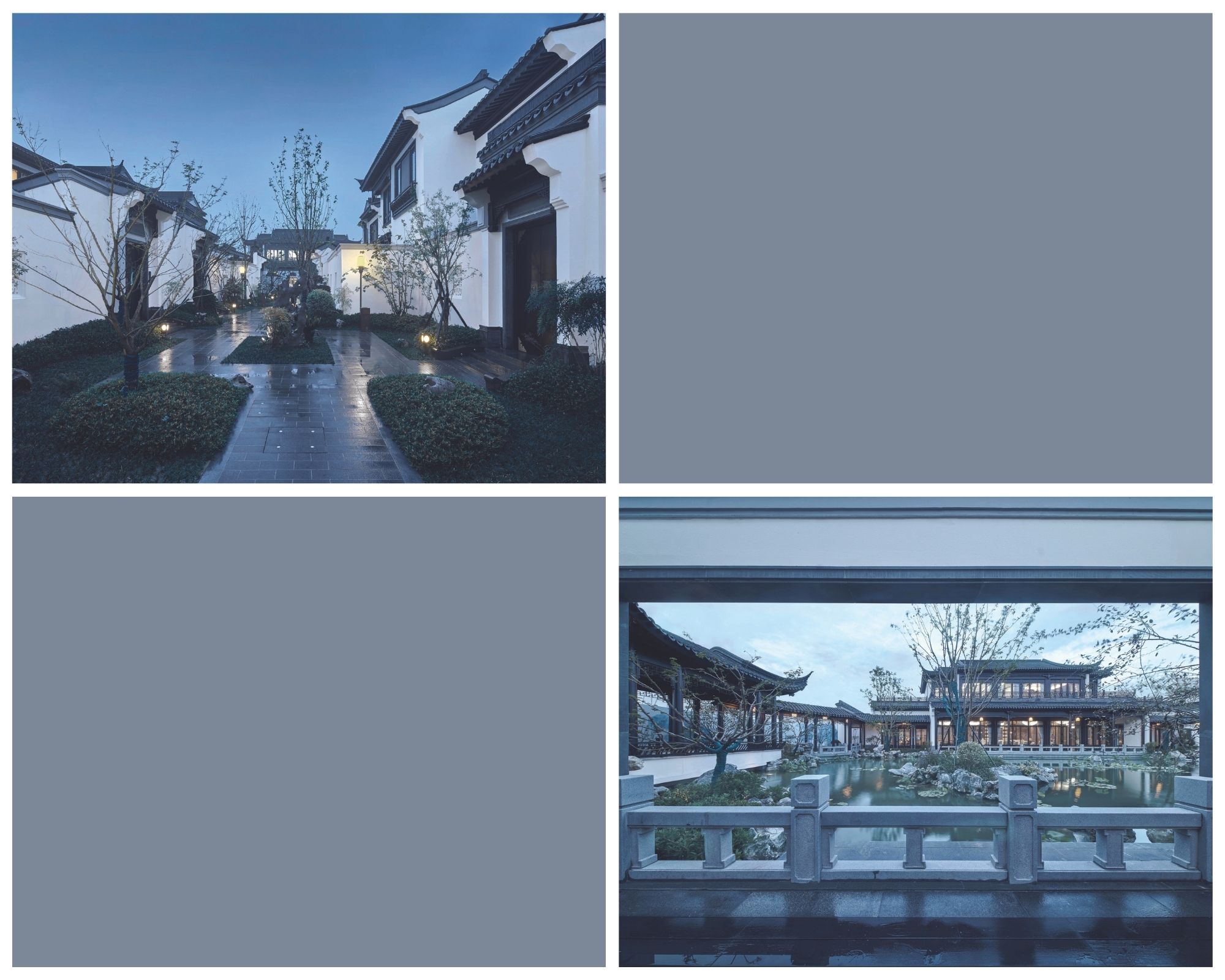 “This is inspired by the design of a traditional Chinese-style villa,” Weiping says. “We wanted to help foster the relationships between different people living there.” In historic Chinese villages and homes, central gathering areas helped organically build a sense of community between residents. By allowing for chance encounters throughout the day, these common spaces can have a subtle, yet powerful impact on the quality of life of those who inhabit them. “We’re designing streets in the old Chinese style,” he says. “Our goal is to create spaces where people can all have conversations together.”

The villa of Guanyun in Deqing 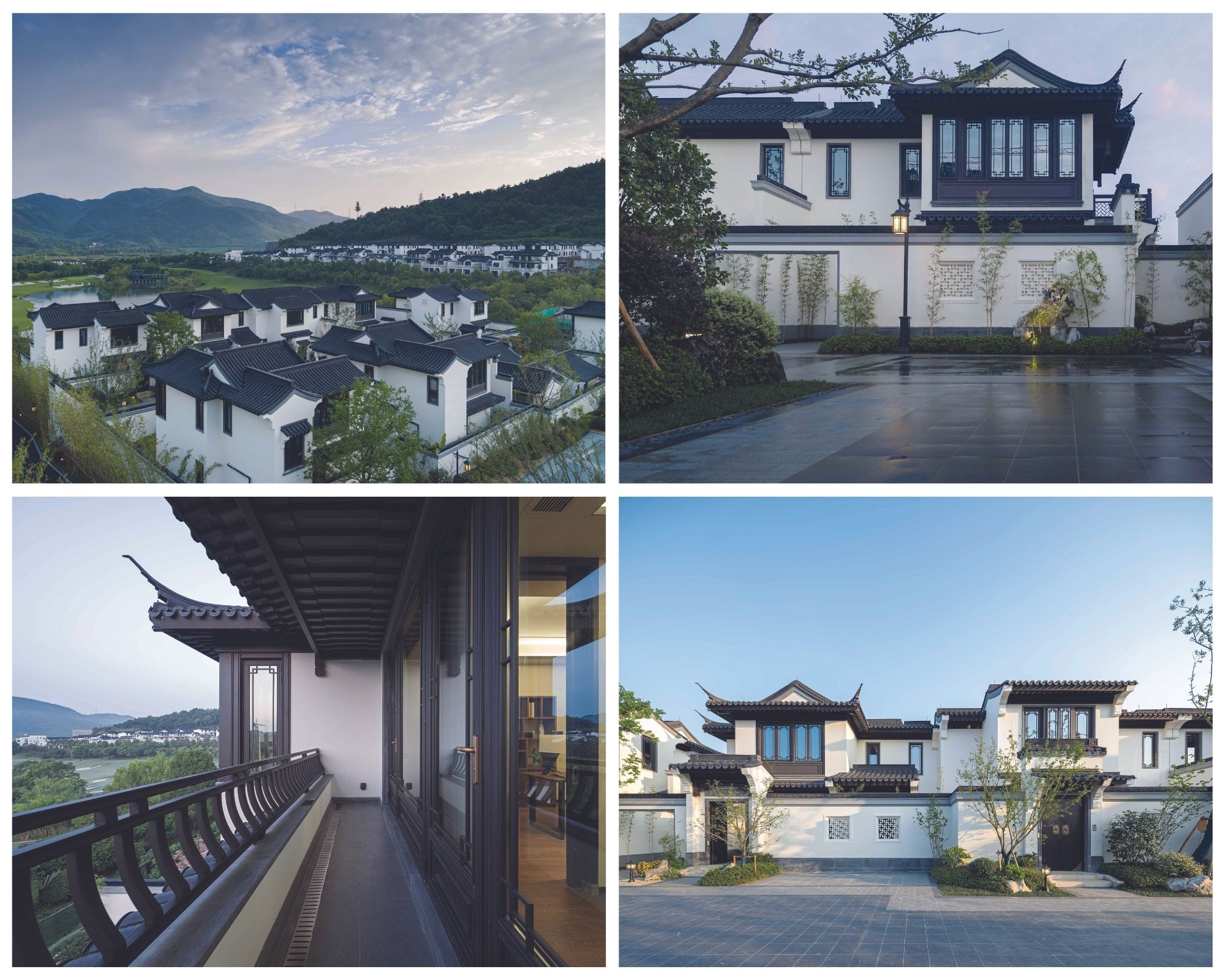 “In southern China, the traditional villa style is quite different than in the northern regions of the country,” Weiping says. Because Bluetown Architects aims for specificity in their designs whenever possible, he wanted to reflect the distinction. “In the south of China, the buildings are historically centred around the courtyards. So we built three levels of Chinese villas and wanted to reference this.” The triple-tiered approach adds a contemporary note to the classic design while still paying homage to the past. “These spaces formed the heart of community life,” he says. “It would be where people would meet one another or grow vegetables in communal gardens.”

The original version of this article appeared in Issue No. 167 of PropertyGuru Property Report Magazine.
Write to our editors at [email protected].

Sent from above: SOURCE Global takes on the globe’s water scarcity problem

Leading lights in real estate development, architecture and design to clinch marks of excellence in the Chinese territories