With Typhoon Yolanda and the climate crisis providing impetus for its design, Arthaland Century Pacific Tower by SOM is one of the most striking examples of green architecture in Asia 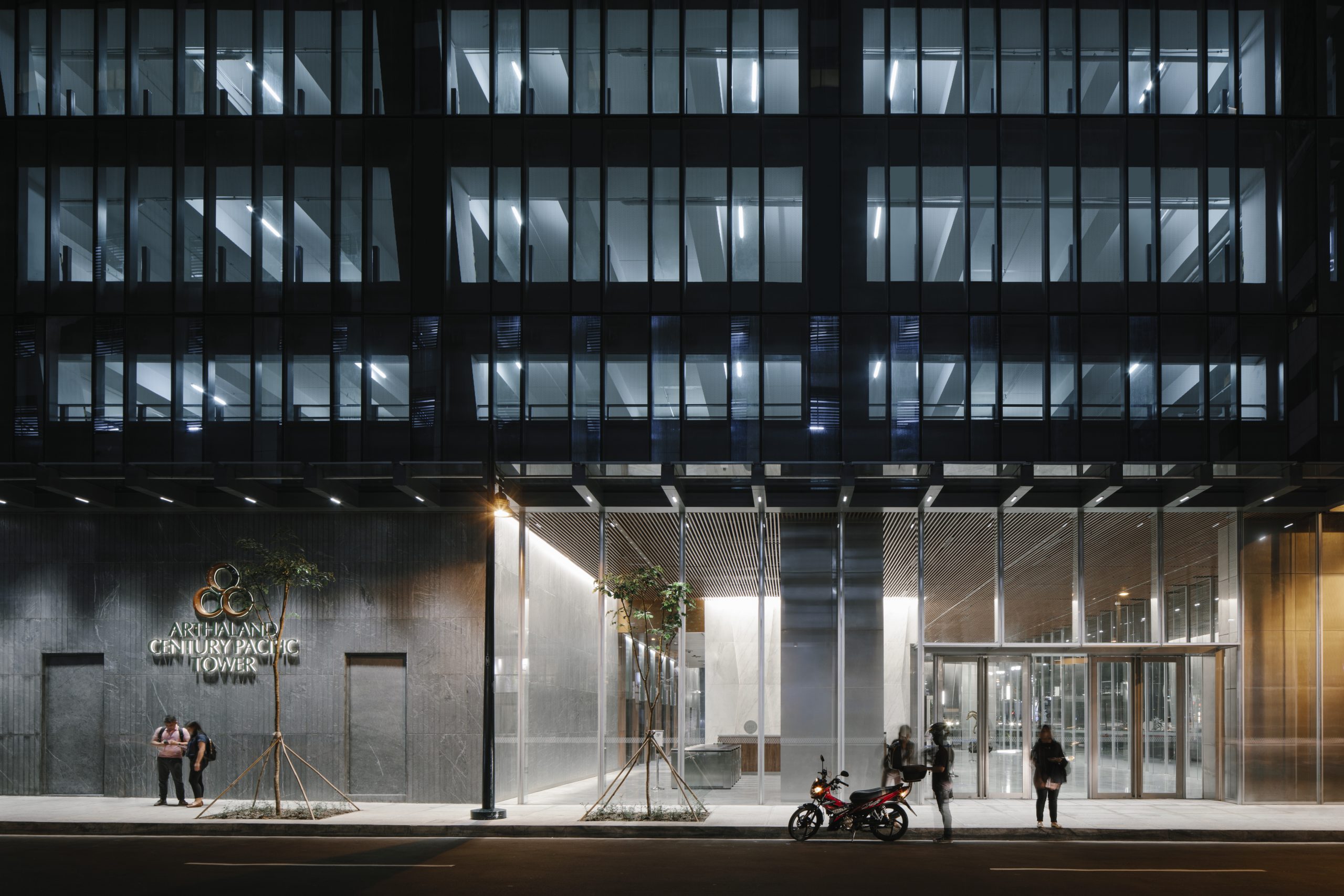 Typhoon Yolanda was glaring at the Philippines when Nicolas Medrano and his colleagues at Skidmore, Owings & Merrill (SOM) wrapped up their first design concept meeting with Arthaland Corporation in Manila.

“That night, we got out on one of the last flights to Korea for our layover back to New York before the typhoon hit,” recalls the associate director of the architecture firm.

SOM had been in town to discuss the basis for what would become Arthaland Century Pacific Tower (ACPT), the eponymous boutique developer’s flagship office.

“The next morning, we saw this devastating news about how communities in the Philippines were completely destroyed.”

With climate change expected to worsen the frequency and severity of extreme weather events worldwide, it seemed apropos of a storm to presage the advent of the country’s greenest commercial building yet.

The laurel makes the tower a triple-certified green building, having also received the apotheotic Leadership in Energy and Environmental Design (LEED) Platinum rating from the US Green Building Council (USGBC) and the five-star Building for Ecologically Responsive Design Excellence (BERDE) certification from the Philippine Green Building Council.

In quality of commercial space, ceiling heights and amenities, however, the 34,295-square-metre tower is “on par with some of the best office buildings in the US,” says Medrano, the project’s design architect. “ACPT outperforms a lot of the other projects we see in the states.”

SOM’s impressive work on the Zuellig Building in Makati, which pioneered LEED Platinum certification in the country, led Arthaland to the New York architecture firm. Initially, the aim was a lower mark, LEED Gold. “Along the design process, when we started to look at the façade, the solar performance and so on, it was clear that we were already achieving a very high mark—very close to LEED Platinum. We decided to just go for it,” recounts Medrano.

The team sourced high-thermal-performance insulated glazing units, with efficient low-E coating and frit patterns, from China. Such choice of glass, selected out of a pool of suppliers from the US to Thailand, succeeded in creating an exterior wall so efficient that it rejects most of the heat coming through a building surface.

Jade served as the muse for ACPT’s visually-striking serrated façade system, mainly at the prodding of Arthaland, which regards the gemstone an emblem of success.

“The tower’s exterior geometry, which is inspired by the surface of a rough gem or jewel, contributes to ideal solar performance,” says Medrano. “The serrated and overlapping glass of the facade creates multiple layers of heat rejection. This design, when paired with optimised glass properties, filters light and energy to create optimal conditions within.”

The IFC determined that the tower accrued 45 percent in energy savings, 64 percent in water savings and 34 percent less embodied energy in materials than a base case building—an “exceptional achievement,” according to Yuan Xu, IFC’s country manager for the Philippines. EDGE-certified buildings must achieve savings of at least 20 percent on those three fronts.

The building runs entirely on offsite hydropower. At just 2,233 square metres, the building location at the corner of 5th Avenue and 30th St. in BGC was too small for farming photovoltaic power in LEED-compliant amounts.

“We didn’t have much surface area for solar power,” explains Medrano. “The roofscape would not have contributed to an efficiency required for 100 percent green energy. It would only have produced, say, half a percentage point of the building energy.”

The plot’s trapezoidal shape also threw a curveball in the floor planning, but the SOM team worked around it by stacking the building as a series of interlocking square and rhombus shapes.

“On the lower floor plates, it’s more of a trapezoid and as the building extends past the crown, it becomes a parallelogram,” says Medrano. The building is set back at an angle from the street, with a triangular pocket park at the corner. This setback helps allow for 270-degree perspectives of Manila, especially from the roof deck and the spacious terrace above the podium.

Although air-conditioning can turn energy-vampiric in a humid city like Manila, the architects managed to provide a sustainable degree of climate control indoors.

Rather than consume energy all day long through a central system, the tower operates a variable refrigerant flow (VRF) cooling system that allows tenants to control their cooling loads as they please.

“It’s not even by floor. It’s actually by office space or by conference room, so energy can be used [only] when needed,” says Medrano. In the same breath, the tower runs an efficient energy recovery ventilation system, protecting occupants from stale indoor air contaminated with volatile organic compounds (VOCs).

Lights are used economically throughout the tower, thanks to fixtures with occupancy and daylight sensors, and the exterior wall that bathes building occupants with natural light by day. Likewise, a range of low-flow and motion-detecting water closets, faucets and urinals minimise water wastage, with greywater recycled for irrigation and flushing. Condensate water recovery and rainwater harvesting systems are also in place.

ACPT’s development commenced in 2014, with Megawide Construction Corporation outbidding various contractors for the project. One of the largest producers of prefabricated concrete floor plates in the country, the renowned infrastructure developer concretised SOM’s concepts on schedule by employing half-precast slab systems.

“Essentially they cast half the concrete floor plate in the shop. From their factory, they ship it to the site, install it, and then pour the top half in place, which saves time and creates a much higher level of accuracy and reduction of material wherever possible,” explains Medrano.

Other than timber touches to the interior fit-out, the superstructure and substructure of the building are largely concrete. Megawide’s in-situ reinforced concrete slabs gave rise to the floor and roof while medium-weight hollow concrete blocks formed the internal walls. The lobby boasts a walnut ceiling, marble flooring, and full-height, ultra-clear glass on three sides. In light of frequent seismic activity in the islands, engineering design firm SY^2 + Associates, Inc. took care to imbue a safety factor into the tower’s concrete structural system.

For humanity to succeed, it’s going to become a prerequisite to design our buildings in a much healthier way

ArthaLand Century Pacific Tower topped off in early 2017, ahead of its inauguration in March 2018. Tenants, ranging from Compass to Deloitte, are housed in more or less 32,016 sqm of net leasable area.

Commercial green building remains a cost-prohibitive undertaking in the Philippines—ACPT cost an estimated USD67 million to build—but developers are increasingly bullish on the bankability of such products. LEED-certified office buildings commanded 12.5 percent higher lease rates than non-LEED-certified buildings in BGC last year, according to Santos Knight Frank. The proportion of LEED-certified office buildings in BGC also made up 100 percent of new stock last year, compared with just 13 percent in 2013.

Medrano thinks it would be nice for every new development in the Philippines to pursue green building certification programmes or at least conflate sustainability targets with design. “For humanity to succeed, it’s going to become a prerequisite to design our buildings in a much healthier way,” he says.

Like the solemn One World Trade Center before it, ACPT is a monument to the human spirit’s ability to transcend adversity.

“The façade is close to my heart,” reveals Medrano. “Experiencing the typhoon first-hand made it clear that aggressively addressing climate change through our design must be our top priority. The building’s facade—which changes from jagged at the base to smooth at the crown—came to symbolise the community’s determination to rise above this tragic event.”

This article originally appeared in Issue No. 160 of PropertyGuru Property Report Magazine