“Roads? Where we’re going, we do not…need…roads!”

Cue Marty McFly and Doc Brown taking to the skies in their modified DeLorean sports car in the 80’s classic Back to the Future. It would seem celluloid has been our modern-day Nostradamus in predicting the future: one only needs to watch an episode of the Jetsons or Luc Besson’s 5th Element to realise that Mankind’s desire to take to the sky via mechanised means has been a source of fascination since time immemorial.

Fiction is increasingly becoming the reality when it comes to exploring disruptive modes of transportation. And none conjures child-like excitement like the thought of taking to the skies. Advanced Air Mobility is a fast-developing industry that will transport people and cargo by using revolutionary new electric aircraft with vertical take-off and landing capability – effectively connecting locations currently not served or underserved by aviation. It provides a new sustainable alternative to travel which will revolutionise short journey transfers across congested cities, city hubs and enable a connection between different modes of transport. Ultimately, it ushers a new spirit of aviation not seen since the bygone era of biplanes or the first jet aircraft – and a more environmentally friendly one at that.

Every era has provided advances in mobility that have sought to provide an ease of movement for mankind to get from A to B and in turn have left an indelible mark on cities. Our streets and squares were once the arteries of movement for our horse-drawn carriages. As cities grew and populations increased, we widened streets to create boulevards for trams and buses; or we disappeared underground into public Mass Rapid Transport systems for the masses. And with the advent of the internal combustion engine, mankind adapted the city further to ensure that automobiles could be a more direct and rapid mode of personal transportation. Just think: in the space of less than half a century, the traditional city of spaces and the horse-drawn carriage was superseded by the modern city of objects and the automobile. If such disruptive technologies had such a profound impact on the ground, what will happen when we augment our mobility with capabilities that reach the sky?

The notion of vertical air mobility may be happening sooner than you think and we have already seen such futuristic visions grace these shores. Singapore is at the forefront of this exciting transport revolution, having been the ‘living laboratory’ for electrical urban air mobility pioneer, Volocopter, and vertiport infrastructure company, Skyports, to test the world’s first passenger ‘vertiport’ in 2019. More vertiports will inevitably be planned to allow for greater ease of movement across Singapore and beyond – tapping into its existing technology and advanced transport infrastructure with a new means of vertical transportation. This will eventually become a vital source of mobility that should enhance people’s first and last mile journeys.

Arguably, the notion of vertical air mobility aligns with Singapore’s future-ready drive to being a Smart Nation and a ‘living laboratory’ for start-ups – especially given the government’s drive for zero-energy strategies, low carbon transportation, and accelerated circular thinking for the good of the planet. It heralds a new culture in mobility and positions Advanced Air Mobility as part of a transportation vocabulary for the 21st century. For this to take place, it requires consultants like global engineering management and development consultancy Mott McDonald and award-winning sustainable designers Pomeroy Studio to combine the traditional with the future-forward: i.e aviation and eVTOL expertise with a rigorous understanding of how cities are moving towards a ‘vertical urbanism’.

Such aspirations may prove timely. By 2050, 75 percent of the global population will be living in cities – putting an inextricable strain on the streets that would have once accommodated 1/10 of the population.

Inner-city migration has seen our cities become increasingly reliant on the mobility infrastructure that hasn’t really changed for 200 years. Compounded by climate change and pandemic, a revolution in mobility is required to transform cities and ensure they do not become casualties of mobility suffocation. A JP Morgan research report of May 2021 states that, by 2050, the market value could be USD9 trillion.

It could be only a couple of years before electric vertical take-off and landing air-taxi’s will be as ubiquitous as its ground-bearing cousin and as such this will undoubtedly mean revisiting our spaces within the city as alternative landing zones. Disused docks, ports, and the roof tops of forgotten buildings could have a new lease of life breathed into them which in turn offers prospects for urban regeneration.

Naturally, with any new disruptive technology there are legislative hurdles that need to be overcome. But if the past is anything to go by, Mankind is tenacious enough to be able to find a path to both create and regulate for the good of civil society. Never has there been such an opportunity to apply technological ingenuity for positive urban disruption and for such benefit until now. As our team of experts with child-like curiosity and passion look to the future today, we are delighted to see Singapore as the launching pad for such innovation. 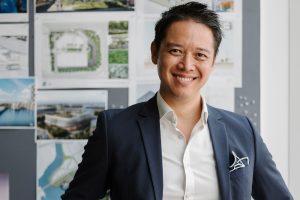 Jason Pomeroy is an award-winning architect, academic, author and TV presenter, regarded as one of the world’s thought leaders in sustainable design. He is the Founder of Singapore-based Pomeroy Studio, Jason Pomeroy Architects and Pomeroy Academy: sustainable urbanism, architecture, design, research and education firms. His career has included critically-acclaimed green cities, buildings and landscapes: from the microscale of the first zero-carbon house in Asia, to the macroscale of Indonesia’s ‘Silicon Valley’. Pomeroy has authored Cities of Opportunities: Connecting Culture and Innovation (2020), Pod Off-Grid: Explorations into Low Energy Waterborne Communities (2016), The Skycourt and Skygarden: Greening the Urban Habitat (2014) and Idea House: Future Tropical Living Today (2011). He continues to raise cultural awareness of cities through his TV series Smart Cities 2.0, City Time Traveller, Futuropolis and City Redesign. He gained Bachelor and Master degrees from the Canterbury School of Architecture and the University of Cambridge, and a PhD from the University of Westminster.

Pomeroy Studio are an award-winning international team of designers and thought leaders of sustainable built environments. The studio is comprised of master planners, landscape architects, architects, interior and graphic designers and sustainability consultants. Quantitative and qualitative research complements an interdisciplinary design process that lies at the foundation of their creative design and decision-making. Designs are rigorously tested to objectively reduce the reliance on natural resources, to preserve the natural and built environment. This has generated people centred places, from the macro-scale of cities to the micro-scale of buildings that pushes the envelope of design and balances a ‘creative vigour with an academic rigour’.