Drawn to Japan by its unique culture and his hunger for knowledge, this well-travelled architect Riccardo Tossani is still mining design manna from his wanderlust

At an age when most students are searching for direction, Riccardo Tossani was already a fully practicing architect. It was the 1980s and concepts like a holistic approach to urban design and sustainability had yet to fully permeate the mainstream, but they were already exuding a powerful influence on the Australian architecture student.

By the time he sat for his graduation at the University of Adelaide in his early twenties, he already had a thriving practice that showed signs of the ethos that would go on to define an illustrious career.

“I was still in my early twenties, but with a desire to do two things: one, expand my mind beyond the idea of architecture as just a way to create a building,” Tossani recalls. “I wanted to understand the resonance between built form and the environment that surrounds it.”

To better do so, Tossani embarked on a grand Australian tradition: the walkabout. His travels carried him throughout Southeast Asia and China. The year was 1984 and the latter had only just opened to foreign travellers. Tossani traversed the nation on slow, coal-powered trains and was awed by what he saw. While the architecture of Australia was, in a global sense, relatively new, the Chinese cities he saw bore visible traces of generations of political and social upheaval.

“During my travels, I discovered cities that were the product of their various dynasties culminating in the revolutionary architecture infused with Soviet influence and ultimately exhibiting a desire to become international in their stature,” Tossani says. “I discovered that I could read the history of a city through its buildings the way one reads sheet music.”

Tossani would go on to settle and work in Florence, where his family roots lie, and gain an even deeper appreciation for the impact of history on urban spaces. By the time he was 30, he had enrolled in the Harvard University Graduate School of Design, where he graduated top of his class. He built a flourishing practice in Los Angeles along with his partner, Atsuko Itoda. While the two could easily have stayed in the United States, Tossani found himself drawn back east.

“I was fascinated by the elements of Japanese culture that gave rise to Metabolism and brutalism and contemporary minimalism and wanted to better understand it all,” Tossani says. “I thought, ‘Maybe if I spent six months in Japan I’ll figure it out.’ Long story short, I probably understand less now about Japan than I did then.”

In 1997, Tossani and Itoda founded Riccardo Tossani Architecture in Tokyo and the rest is history. The duo quickly realised that Japan offered opportunities to fully realise ambitious projects far faster than they could ever hope to achieve in the west. The combination of Japan’s building frenzy, and a mutual love and respect for the culture has kept them based there ever since.

“Tokyo in the 1980s and the 1990s was just a crucible of fashion and music and graphic and design,” Tossani says. “There was a new nightclub opening every week. This is a very sophisticated culture. The complexity and idiosyncratic nature of this society are beyond understanding and that makes it so much more interesting.”

Although Tossani and his multinational team of architects have projects all over the globe, much of their focus in recent years has centered on the burgeoning luxury ski resort area of Niseko. Tossani’s projects are especially noteworthy both for their attention to sustainable design and for the way that they echo and accentuate the region’s breathtaking natural splendour.

When Tossani first began building in the region, he was something of a maverick in this regard. The authorities were so quick to encourage development projects and generate revenue that little thought was given to the potential lasting negative impacts. Tossani spent years advocating to preserve as much of the natural landscapes as possible. As locals began to realise what was being destroyed by irresponsible construction, there was a mass rebellion.

Today, Niseko’s approach to development adheres far more closely to the one Tossani has always held. There’s a powerful belief in the importance of creating buildings that are more than mere structures, but rather an extension and an expression of the utmost respect for their environments. 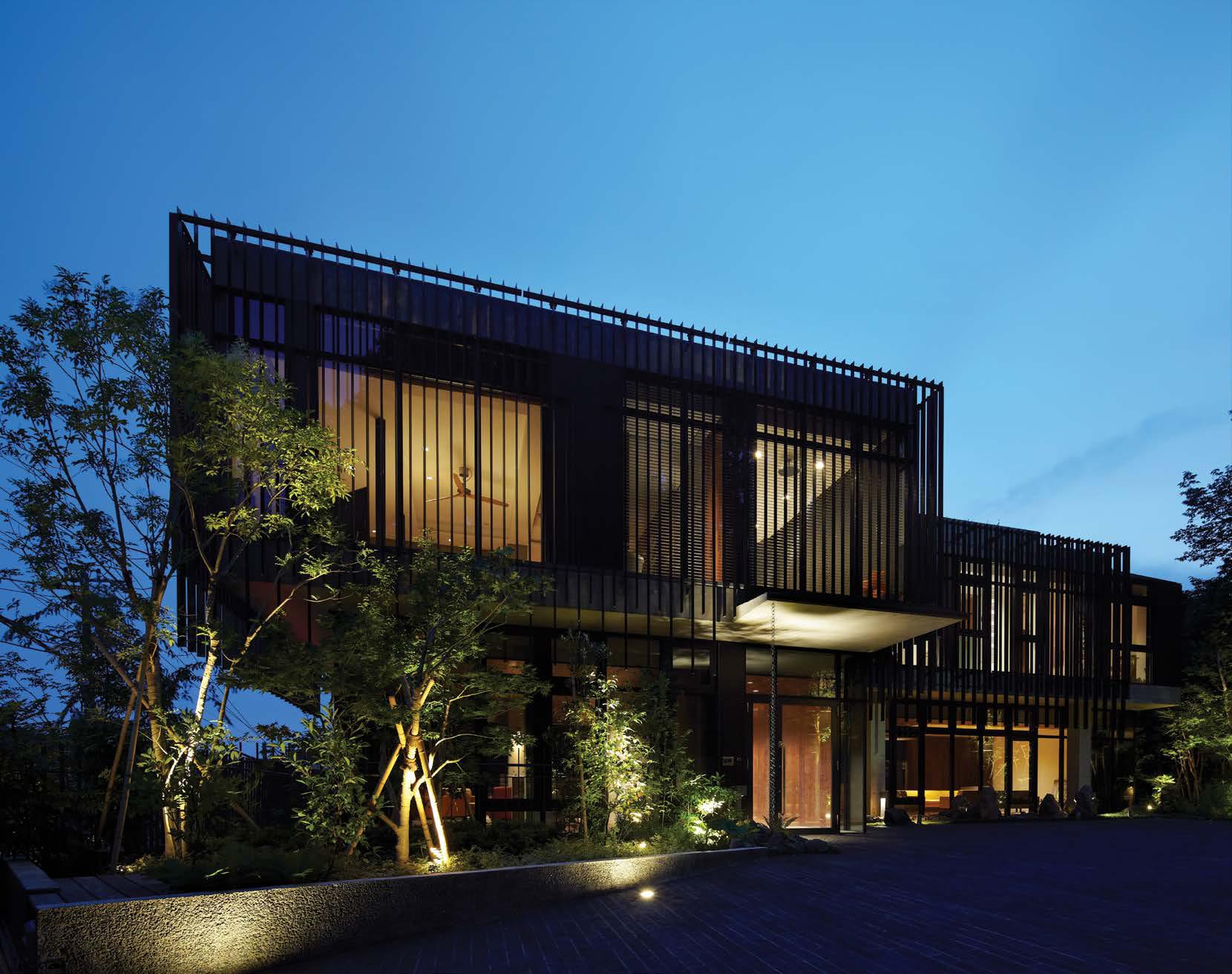 “This is a glass building, but it is surrounded by brise soleil and automatic solar blinds, so even though its skin is glass, we’re preventing the sun from penetrating the building in a detrimental way,” Tossani says. “It’s double-glazed and the whole skin window system of this building is designed to insulate from thermal transfer, and yet allow light and views to be permissible.” The façade system allows heat to enter in a controlled way, while warming in winter and cooling in summer the entire space with an elegantly concealed system of radiators. “On top of the roof of this building is a solar farm that produces the amount of energy necessary to make this house over a typical one-year period independent of the grid. This is a classic example of our approach to sustainable design in an urban environment.” 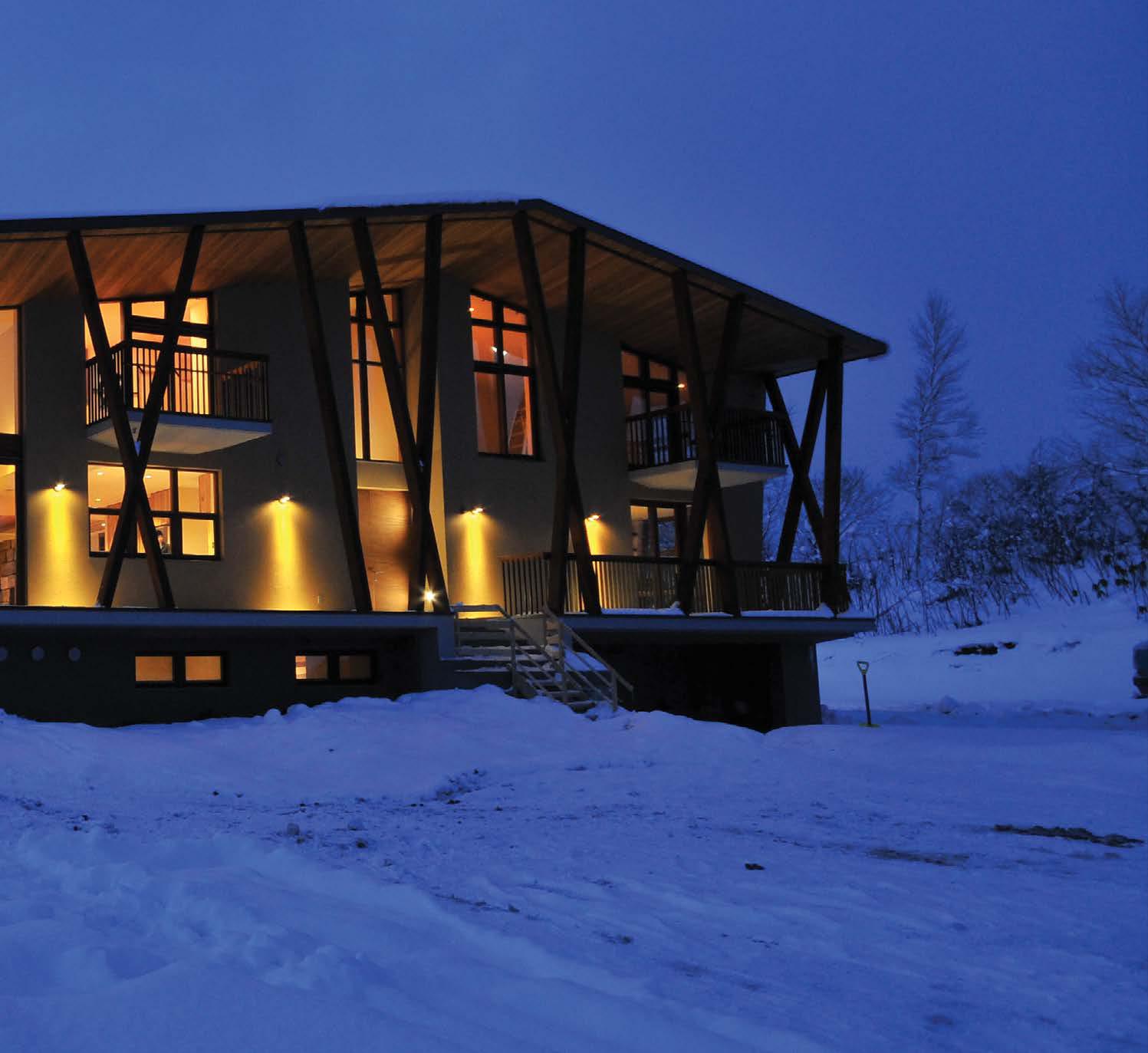 “This is a very large residence and the idea was to create very deep verandahs, which create outdoor protected spaces that are pleasant places to sit in winter even when the snow is falling,” Tossani says. There’s plenty of incentive to want to sit outside, given the unbelievable location. “The house faces two primary directions, both of which have spectacular views. On one side of the house is the volcano, Yotei, on the other side the illuminated ski mountain. The deep verandahs make it possible to enjoy both. The idiosyncratic, angular columns are a metaphoric gesture to the tree geometry of the local silver birch forests.” 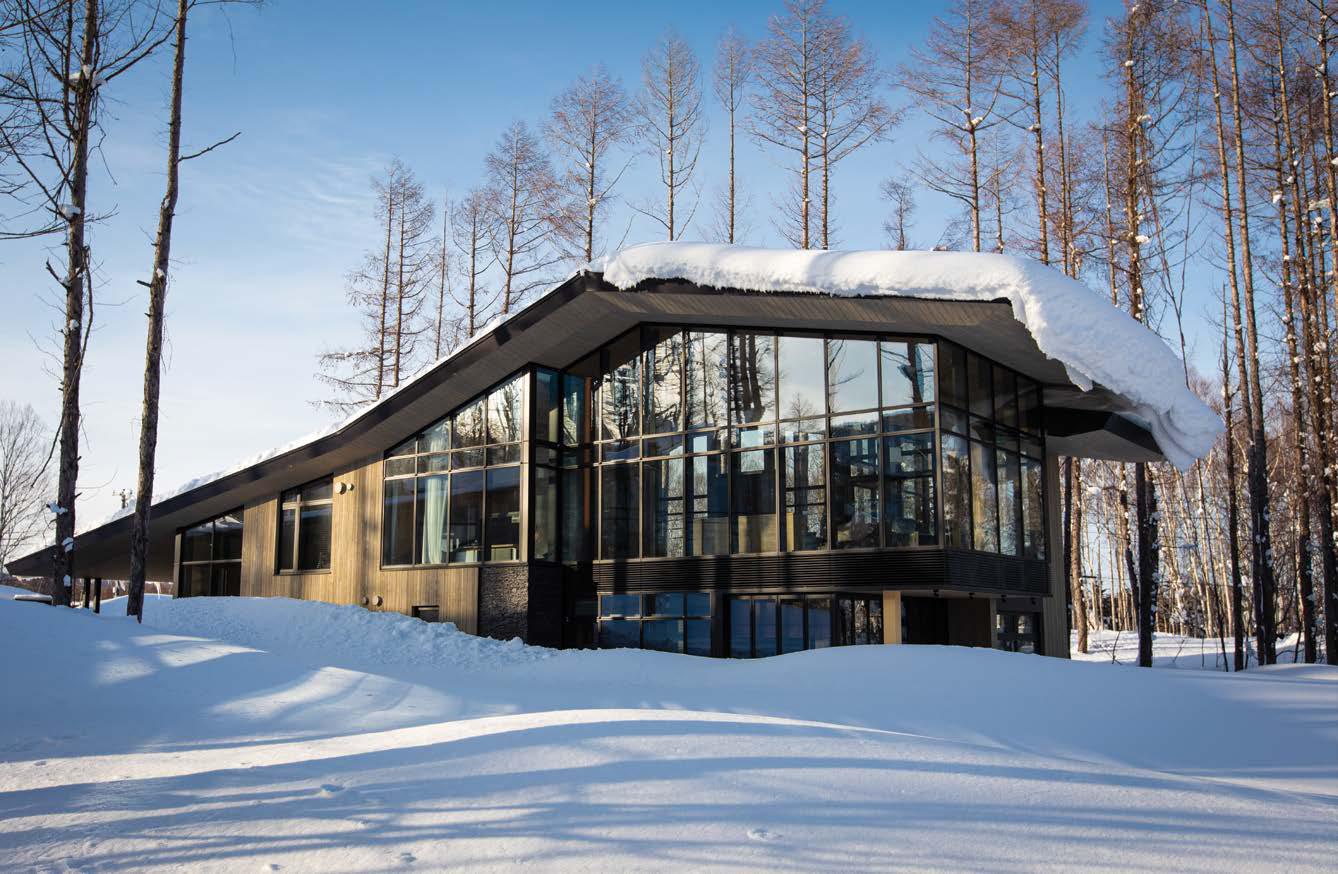 “A requirement of this estate was to have pitched roofs with a 13m height limit, so we had to work within this limit to create a prosaic roofline that provided as much ceiling height as possible with views that provided exposure to the volcano,” Tossani says. “Remember, there’s an average of 15 meters of snowfall every winter, so managing the snowfall on the roof in Niseko is serious business.” An indoor and outdoor onsen, both protected from the elements and boasting stunning views, add to the building’s allure. “we used natural & local materials throughout and we tried to preserve as many trees as possible. We believe in creating light and space by wrapping view-oriented rooms to staircases in glass.” 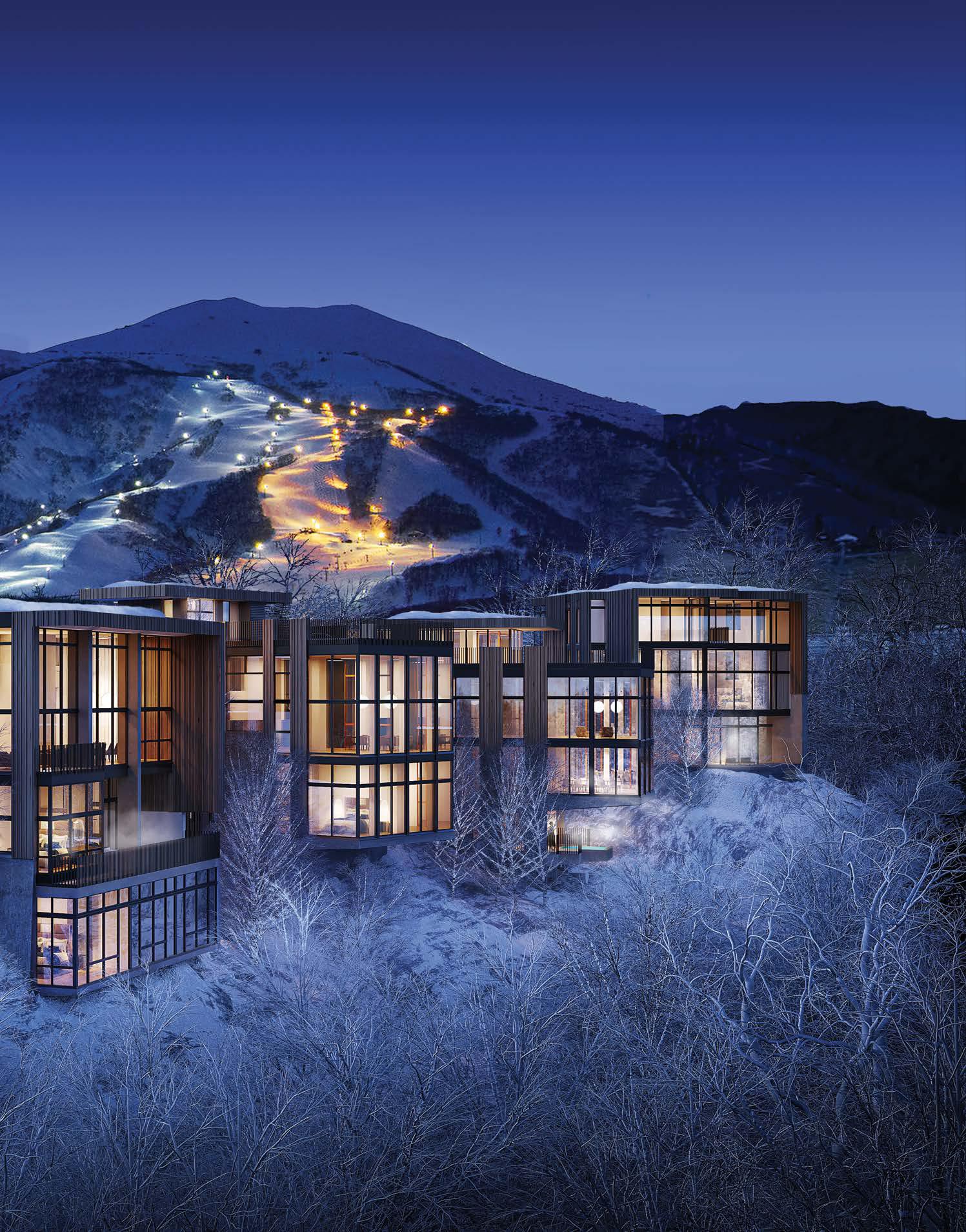 “These villas are on a cliff edge that drops down into a valley. In order to stay within the generous 22-metre height allowance, and maintain resonance with the 13-metre-high middle village adjacent, we don’t go up, we go down into the river valley, which brings principal rooms closer to a bubbling stream—you can hear it from every room in the house,” Tossani says. Rather than try to cram as many floors into the structures as possible, Tossani opted to make the best use of that vertical drop by designing fewer floors with higher ceilings including impressive 5.5-metre-high ceilings in each of the living rooms, creating a sense of space and light with views of Mount Yotei and the ski mountain. As a bonus, each of the villas comes with a breathtaking outdoor bath. 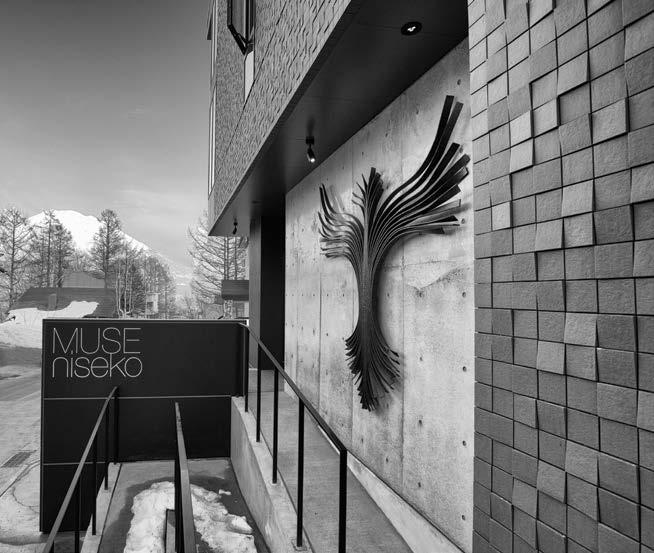 “We try to inject as much art as possible into the design,” Tossani says. In the case of Muse Niseko, he included a sculpture of his own creation, as well as custom commissioned works. “The murals are by Rieko Kawabe, Japan’s premier calligraphy artist, who reinterpreted the indigenous Ainu culture’s script to create something truly spectacular.” Even the building itself feels like a work of art. “If you look at the skin of Muse, the custom tiles are angled and projected in order to catch the powder snow and cast dynamic shadows,” he says. “A signature of our buildings in Niseko is that our architectural skins are designed to catch the powder and react to snowfall and changing light conditions in a really beautiful way. Micro-shadows shift with the sun as it moves across the building.” 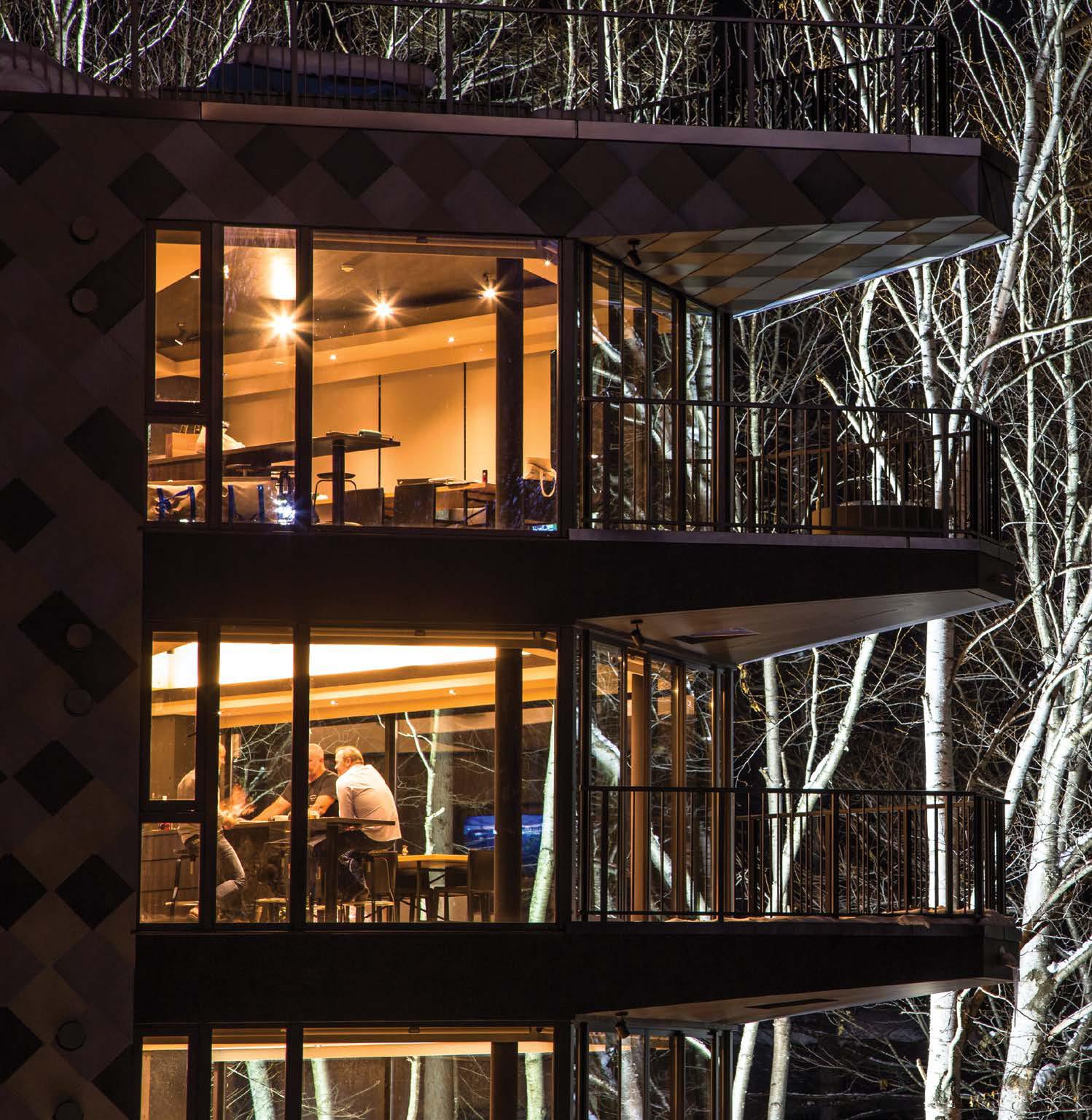 “Not every building in Hirafu Village has unlimited panoramic views,” Tossani says. When an architect is lucky enough to have access to them, it pays to make the most of them. “Wraparound windows highlight the spectacular views, while external landscape lighting accents the surrounding silver birch at night.” “The site itself has an angular edge to it, which we’ve reflected in the building to create these very dramatic angular living spaces with cantilevered balconies,” he says. “Abundant use of natural materials accentuate the alpine environment without competing with it.”

The original version of this article appeared in Issue No. 169 of PropertyGuru Property Report Magazine. Write to our editors at [email protected].