Taking cues from his art deco-loving father, Ronald Liang has built his Hong Kong-based practice LWK + Partners into one of Asia’s most fluid and diverse design firms

No one has probably witnessed Hong Kong in all its glory – both varnished and unvarnished – like Ronald Liang.

The Kowloon-based firm has offices in both Hong Kong and Macau, as well as in mainland China. Its designers fan out all over the region, to commissions in Malaysia, the Middle East, and South Korea.

Liang, who serves as managing director, credits his father as the first of many tastemakers. “My father was born in a golden era of architecture in Shanghai. His descriptions and romanticising of art deco style were imprinted in my mind at an early age,” he recalls.

Australia furthered the culturing of Liang, who obtained his professional degree from the South Australian Institute of Technology in Adelaide. “In my high school days in Australia, I assisted an architectural student. This, and my experience with my father, influenced my life and cemented my desire to be an architect as a lifelong career.”

For every project we work on, it is important to deeply understand the people, culture and landscape of the community we design for, and to merge these elements into the project

Liang’s due-paying years in Oz would serve him well on his return to Hong Kong, where he established LWK + Partners in 1985. “Compared to Hong Kong’s projects, Australian projects were of a smaller scale with much more emphasis on quality. This informed the basic DNA of the firm,” he says.

Professing a form-follows-function creed, LWK + Partners had its hand in the design of several Hong Kong public housing projects in the late 1980s. It would later cultivate a reputation for architecting high-rises, paralleling Hong Kong’s transformation into one of the world’s highest-density cities. The ONE in Hong Kong, for example, rises 171 metres—the tallest retail complex in Asia.

“Limited space is one of the characteristics of cities like Hong Kong, so we transform this characteristic into our design to fulfil the needs of users and clients,” explains Liang. “For every project we work on, it is important to deeply understand the people, culture and landscape of the community we design for, and to merge these elements into the project.”

Liang reveals it’s still his favourite. “We spent a lot of effort on the residential project to make it a premium address at the time. This project was a great opportunity for LWK + Partners to develop and create a series of luxury houses in Hong Kong and therefore build up our reputation.”

The call of the mainland had become a din by the turn of the millennium. In 2001, the firm opened an office in Shenzhen, the first of more than 20 in China. Almost instantly, the disconnect in styles between Hong Kong and the mainland presented itself. “

In China, urbanisation is rapid, and people are looking for new lifestyle [centres] to cater to their diversified needs, for example, live, work, leisure, culture and social needs. Therefore, large-scale and mixed-use projects have been in high demand, from first-tier cities 10 years ago, expanding to second- and third-tier cities in recent years,” says Liang.

The call of the mainland had become a din by the turn of the millennium. In 2001, the firm opened an office in Shenzhen, the first of more than 20 in China. Almost instantly, the disconnect in styles between Hong Kong and the mainland presented itself. “In China, urbanisation is rapid, and people are looking for new lifestyle [centres] to cater to their diversified needs, for example, live, work, leisure, culture and social needs. Therefore, large-scale and mixed-use projects have been in high demand, from first-tier cities 10 years ago, expanding to second- and third-tier cities in recent years,” says Liang.

As architects, we provide optimal solutions to urban planning and design that facilitate cultural integration and sustainability while these solutions reveal and respond to the government’s strategies and policies on urbanisation and development,” says Liang.

Prescience is the name of the game at LWK + Partners. “Sustainability has been a hot topic, and how technology goes hand in hand with sustainable and green architecture will get more and more attention from the industry, governments and the general public,” says Liang, no doubt influencing the firm’s recent decision to design the Gallium Valley Science Park in Hangzhou.

The formation of a sister company, isBIM, greatly bolstered its building information modelling (BIM) capabilities. “Built spaces today is about creating experiences and encouraging interactions between its users, while technology can help us optimise future designs and accelerate the realisation of true smart cities,” says Liang.

As much as it likes to look forward, LWK + Partners cherishes the past. In 2010, the firm added a team of conservation specialists, LWK & Partners Conservation, revitalising heritage sites such as Light Housing in Sham Tseng, Hong Kong and Danzishi Street in Chongqing. “Hong Kong has been so well developed that revitalisation and heritage preservation are rather key to the city, giving the architecture as well as the community a second life,” says Liang.

The practice today provides a comprehensive spectrum of architectural solutions, covering the full lifecycle of a project. LWK + Partners are not just architects and interior designers; they are also BIM experts, lighting designers, urban planners, heritage conservationists, and more.

In that way, Liang and his partners are like Hong Kong itself: diverse, never generalist, always moving forward. “I believe that great design has infinite possibilities and direct positive impact on people’s lives. The key is to adopt a holistic view on people and built environment,” he says. 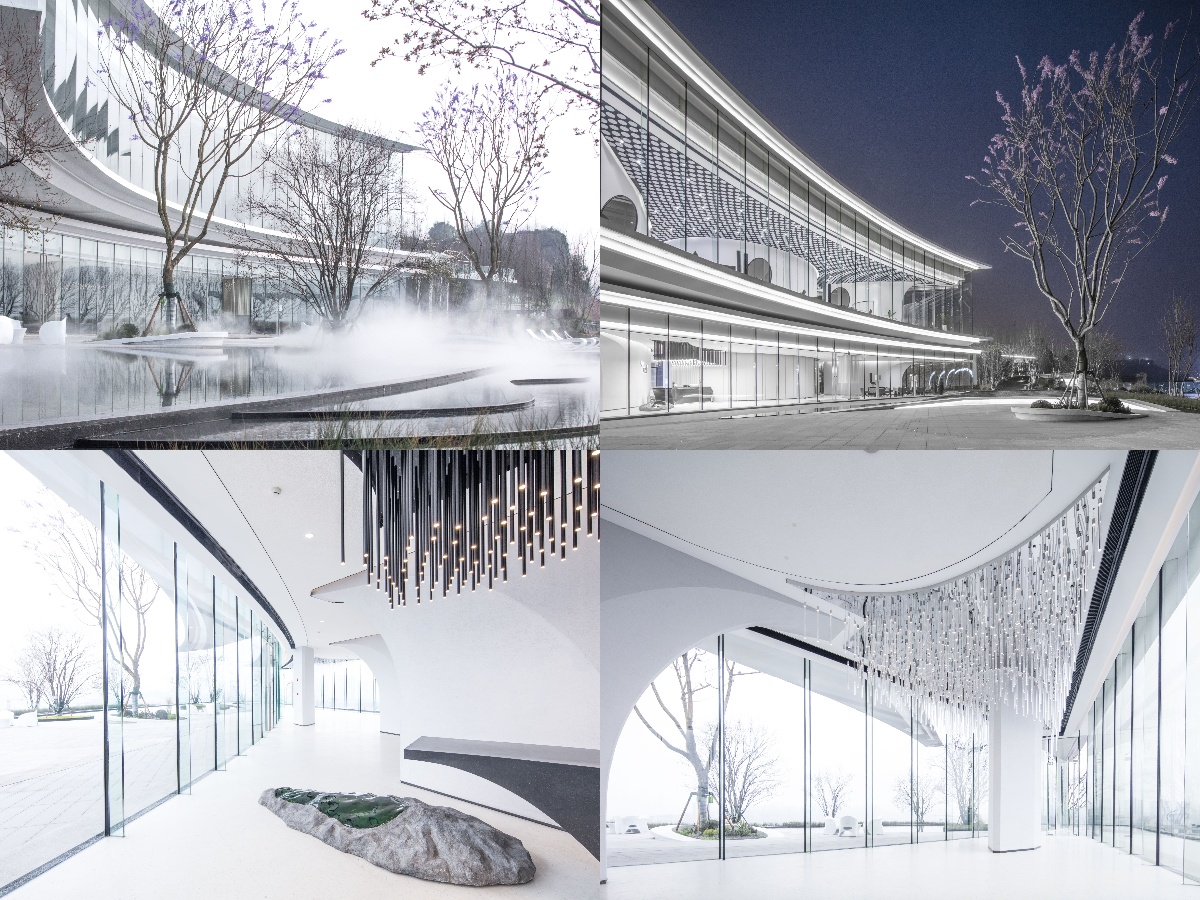 High above a riverbend in Chongqing sits this (literally) cliffhanging lifestyle gallery covered in more than 180 panes of customised glazing. From a cliff, the Chongqing Jiangshan Yun Chu – Legend Gallery gives occupants marvellous views of the Jialing River, and the upcoming Yue Lai core transit-oriented development (TOD) district. Walking along the gallery’s 18-metre-long observation terrace virtually gives visitors a sensation of ascending to the sky. With a gross floor area of 2,500 square metres, the grandiose site comes alive at twilight, testify the design team who were inspired by the scenic gold and crimson light that reportedly colour the vistas at that hour. 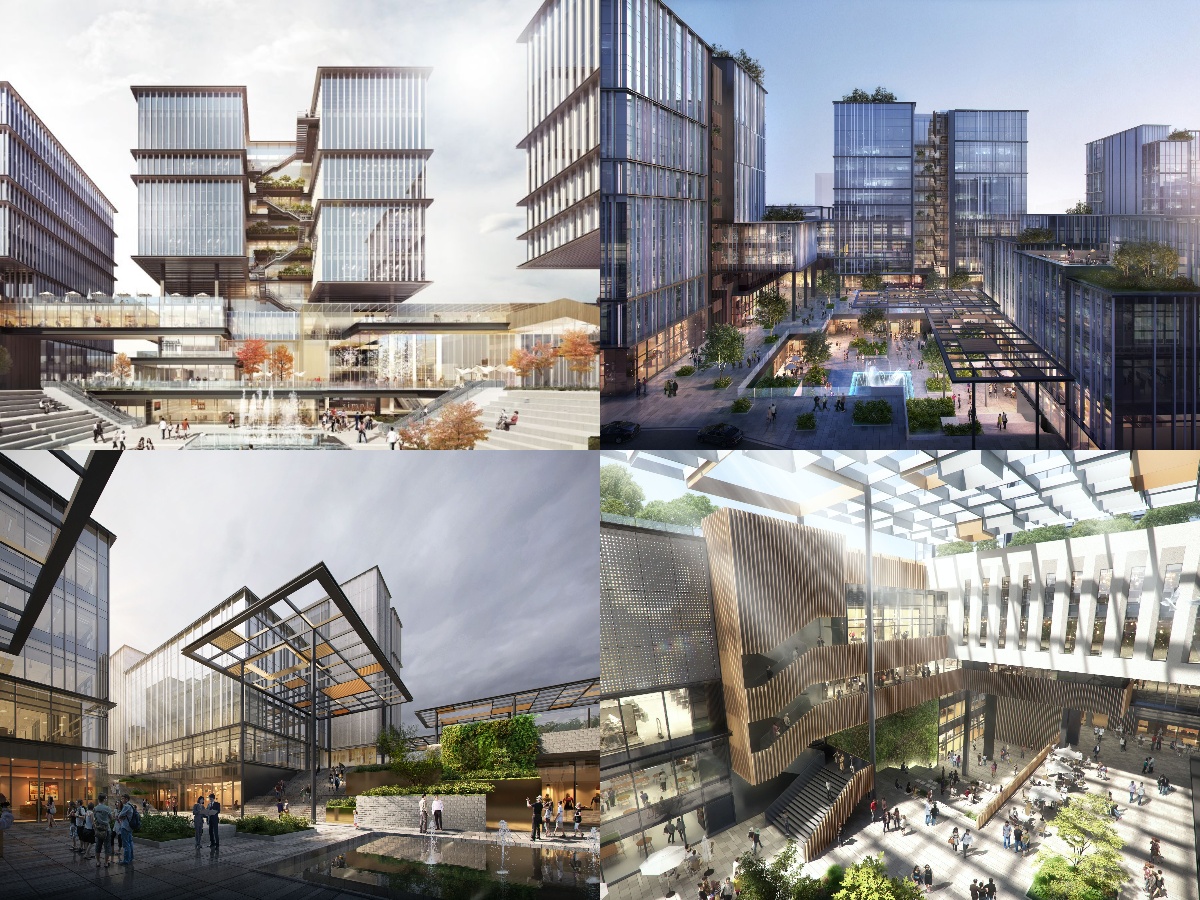 Liang and company aim to house the workforce of the future in this 63,300-square-metre science park, envisioned as the heart of the Cloud Valley technology cluster in Hangzhou. Upon completion in 2021, the riverside park will likely attract some 6,000 STEM professionals to 158,250 square metres of built space that include sophisticated laboratories and coworking spaces. The interior design echoes computer mainboards, while amenities like smart lighting, automated HVAC, and smart lifts make the park a testbed for artificially intelligent property management. Fire-escape staircases for the buildings have been externalised; major recesses into the building envelopes ensure every floor has communal terraces facing a central courtyard. Finally, public spaces like restaurants, retail outlets, and exhibition venues give visitors reason to say science is fun.

This 21,500-square-metre retail complex in Chongqing’s Nan’an District is the first 4A national scenic area in China to have received the honour under the theme of “port culture and Grade 9 hill slope forms.” In other words, the waterfront development is a successful reinvention of Danzishi Old Street, a historic thoroughfare that connects docks alongside the Yangtze and Jialiang rivers. Framed-view windows and patterned lattices and screens were installed to direct the line of vision towards the picturesque scenery, while traditional grey brick tiles were renewed with modern materials. Classical motifs were reinterpreted as modern geometric shapes. To ease navigation on foot, the firm devised a multi-platform layout consisting of escalators, stairs, and other forms of vertical transportation. 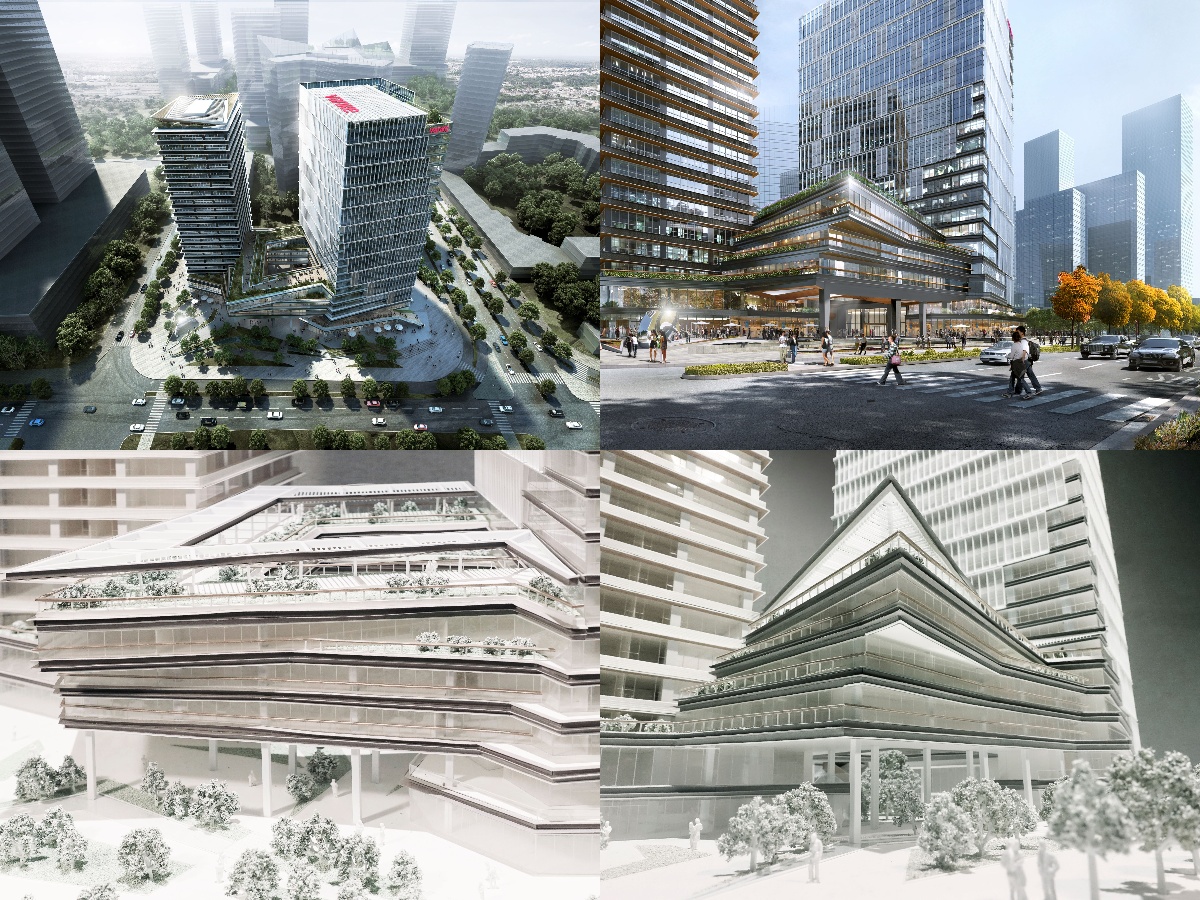 China Vanke Co Ltd. enlisted LWK + Partners to erect this innovative office development in Hangzhou in time for the opening of the 2022 Asian Games Village. Set in the metropolis’ Qianjiang Century City district, the 13,969-square-metre site with a gross floor area of 95,521 square metres comes in two towers that share a podium, plus a three-level underground carpark. Full of F&B options and entertainment spaces, the lifted podium rotates and shears horizontally to open up cascading outdoor terraces; a semi-public roof garden on the podium serves to bridge leisure space between the two office towers. Continuous, deep-set spandrel fins further emphasise the convergence of the two towers at the lifted podium. Meanwhile, a locally sourced ginkgo tree serves as a focal point of the central courtyard, multiplying occasions to network for different building users. 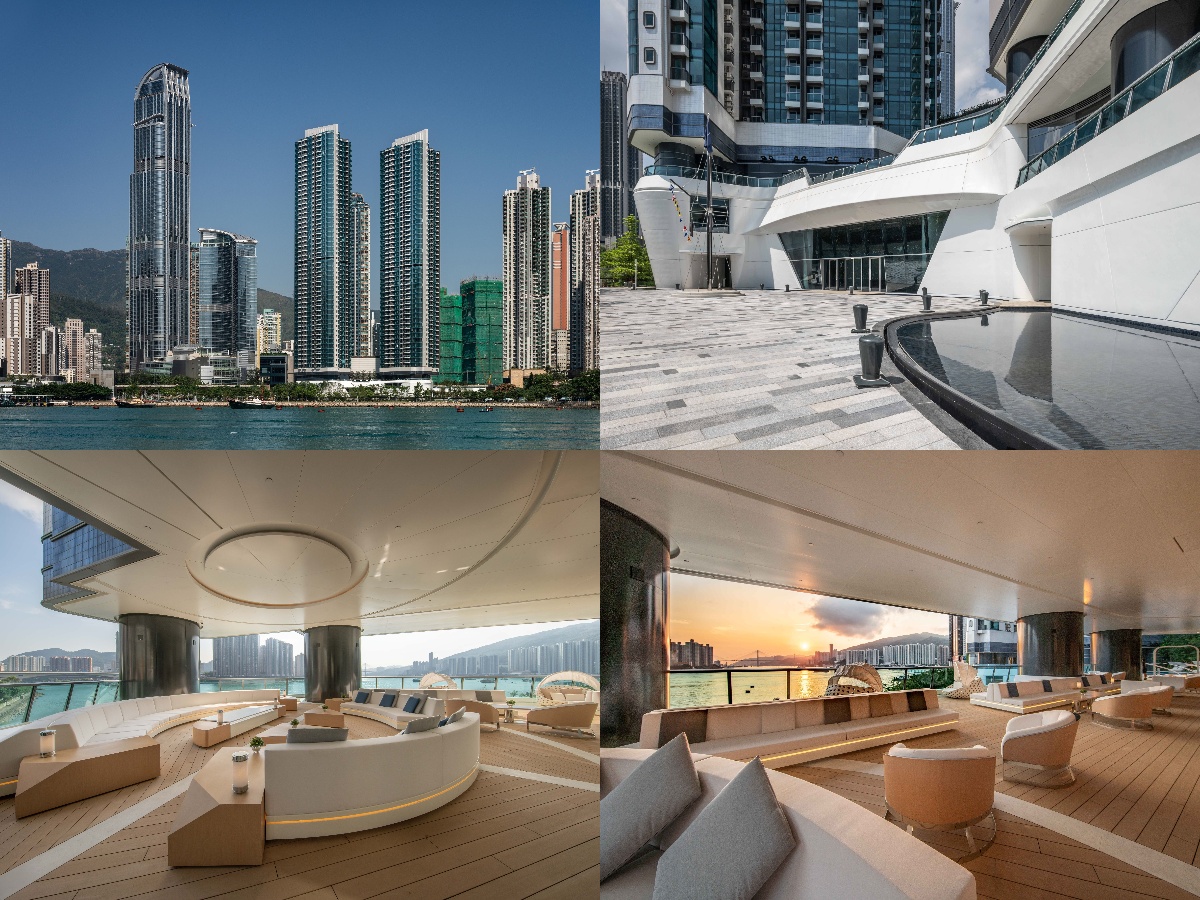 At the urging of award-winning developer New World Development Company Limited, LWK + Partners designed this waterfront residential project that puts into stark profile the luminous sunset views of Hong Kong’s Rambler Channel. Rising out of the sea on reclaimed land, the project juts heavenwards in two towers that reach heights of 174 metres (48 storeys) and 165 metres (45 storeys), respectively. With a gross floor area of 62,710 square metres, the development offers 983 residential units, each oriented to maximise unobstructed views of the channel, especially from their open-air terraces and balconies. Sofas, lounge chairs, and transparent parapets populate such private vantage points. The project stays on a nautical theme, its interior colour palette reminiscent of a super yacht. Designer Philippe Briand was brought in to envisage the interiors of the residents’ clubhouse, Blue Pavilion. 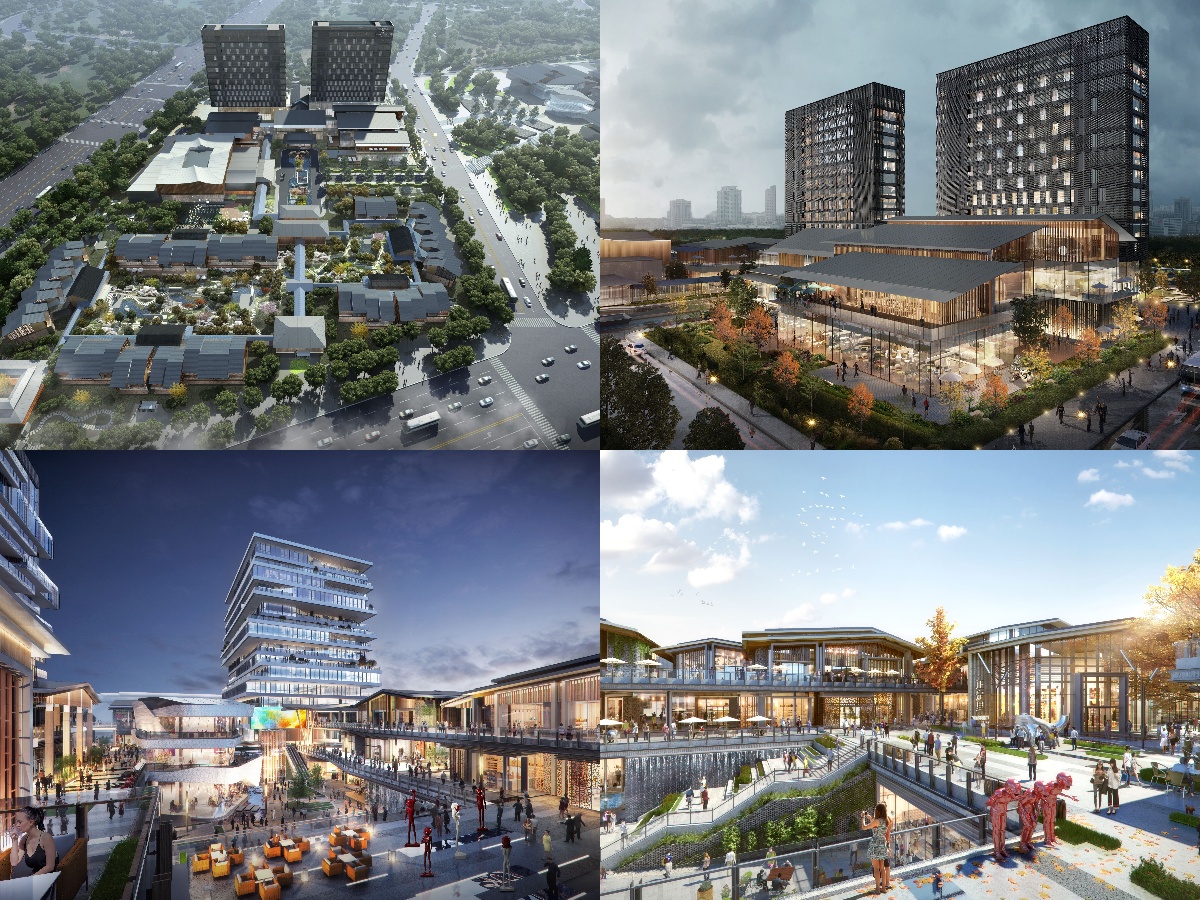 The Chinese province of Hebei will never be the same again with the completion of this new commercial district by 2022. Zhengding Li, spread on a 53,591-square-metre site in Hebei’s provincial capital Shijiazhuang, is a play on the historic city of Zhengding nearby, with blocks that feature traditional Chinese architectural styles: a seamless blend of pitched roof and pillars and modern glazing. Zhengding Li encompasses a 187,858-square-metre retail precinct, typified by a network of pedestrian-friendly retail streets, plus a resort hotel, SOHO offices, and serviced apartments. Serving as a visual foil to the low, heritage-inspired blocks, the tall blocks in the development favour a contemporary style, with expansive green decks on different levels.

This article originally appeared in Issue No. 157 of PropertyGuru Property Report Magazine 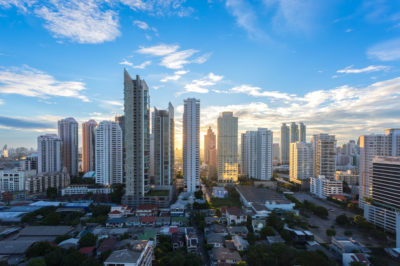