Hun Chansan, principle of lean, innovative practice Re-Edge Architecture + Design, is among the figures elevating Cambodia’s design scene to the next level

Asia-Pacific has long been home to top-tier architecture and design firms, but for years, much of the talent remain concentrated in hubs like Singapore, Shanghai, Hong Kong, and Bangkok. Recent times, however, have seen the spotlight trained on Cambodia, as small, innovative design companies wrack up well-deserved accolades. Among the country’s rising stars is Hun Chansan, the founder and head of Re-Edge Architecture + Design. Since launching his firm in 2011, Chansan and his team have tackled projects ranging from luxury hotels to private homes to mixed-use developments with equal aplomb.

“The design scene in Cambodia is still relatively small, with only a handful of firms that keep producing work with bold statements, efficient use of space, and thoughtful design details,” Chansan says. Firms such as his are leaving a mark on the nation and helping to foster a nascent creative scene in the process. “As architecture continues to transform the physical environment here, the growth in the local artistic scene contributes to the well-rounded disciplinary projects that see artworks transforming the interior and exterior spaces as well.”

A flair for design is embedded in Chansan’s DNA. His youngest sister and brother-in-law are highly successful practicing architects in Singapore, while four of his cousins practice architecture and interior design around the region. His father, grandfather, and great-grandfather were all accomplished photographers—the latter having made a name for himself as a street photographer after the fall of the Khmer Rouge. Through his lens, he captured the lingering trauma of a nation struggling to rebuild its identity.

Chansan recounts growing up spending long afternoons in his father’s photo studio. As a teenager, he would gaze in admiration at Phnom Penh National Olympic Stadium. While too young to understand the mechanics of constructing such an architectural feat, he had an innate appreciation for its beauty. It was only after he went to high school in Singapore that an art teacher recognized his talent and suggested he apply it to architecture. “I don’t think one really decides to become an architect. For me, it kind of just fell into place,” he reflects, adding he was also inspired by Singapore’s modern architecture and the concept of a garden city.

“We always link the indoor living environment to the outdoors by bringing nature in wherever possible and creating comfortable living spaces outside. This idea is actually very simple, since Cambodians have a long tradition of gathering outdoors”

After graduating from the Massachusetts College of Arts and Design in Boston, Chansan spent several years in the United States working as a private contractor in his professor’s architecture firm. During this time, he developed 3D visual renderings and models, in addition to guest lecturing at various architectural schools. By the time he returned to Cambodia in 2009, he had a clear vision of how he wanted to apply the skills he had cultivated in the real world.

Chansan and his team have already transformed Phnom Penh in some striking ways, but their most ambitious projects are still in the pipeline. As his company matures, Chansan hopes to further solidify and develop the design language already manifesting in its growing portfolio. Works like the forthcoming Maritime Tower and The Point Community Mall use abundant natural light, touches of greenery, and a sustainable ethos to create a thoroughly contemporary aesthetic.

We care about nature and the physical environment of our spaces. We always link the indoor living environment to the outdoors by bringing nature in wherever possible and creating comfortable living spaces outside,” Chansan says, adding, “This idea is actually very simple, since Cambodians have a long tradition of gathering outdoors.”

Emphasising a connection between the interior and exterior spaces serves both a functional and visual purpose. Chansan’s designs often allow for passive ventilation, providing a cooling effect without the excessive use of fossil fuels. Long before technology made air-conditioning all but ubiquitous in Southeast Asia, designs for traditional homes often incorporated natural ventilation. Re-Edge also frequently orients buildings from north to south, to minimise solar exposure and further reduce heat during the day. When that isn’t possible, vertical walls of plants, rooftop overhangs laden with vegetation, and natural shading devices accomplish the same task.

In a sense, Chansan’s approach to sustainability represents his overall process. The architect often turns to surprisingly intuitive solutions to complex problems. By drawing on his country’s past and traditions from all over the world, he creates designs for the future. “As I grow, I become aware of the complexity in handling a project, but my approach to challenges has always been simple,” Chansan says, adding, “My passion and commitment to architecture and design will always bring me back to my artistic self, which I like to believe is a mindful self.” 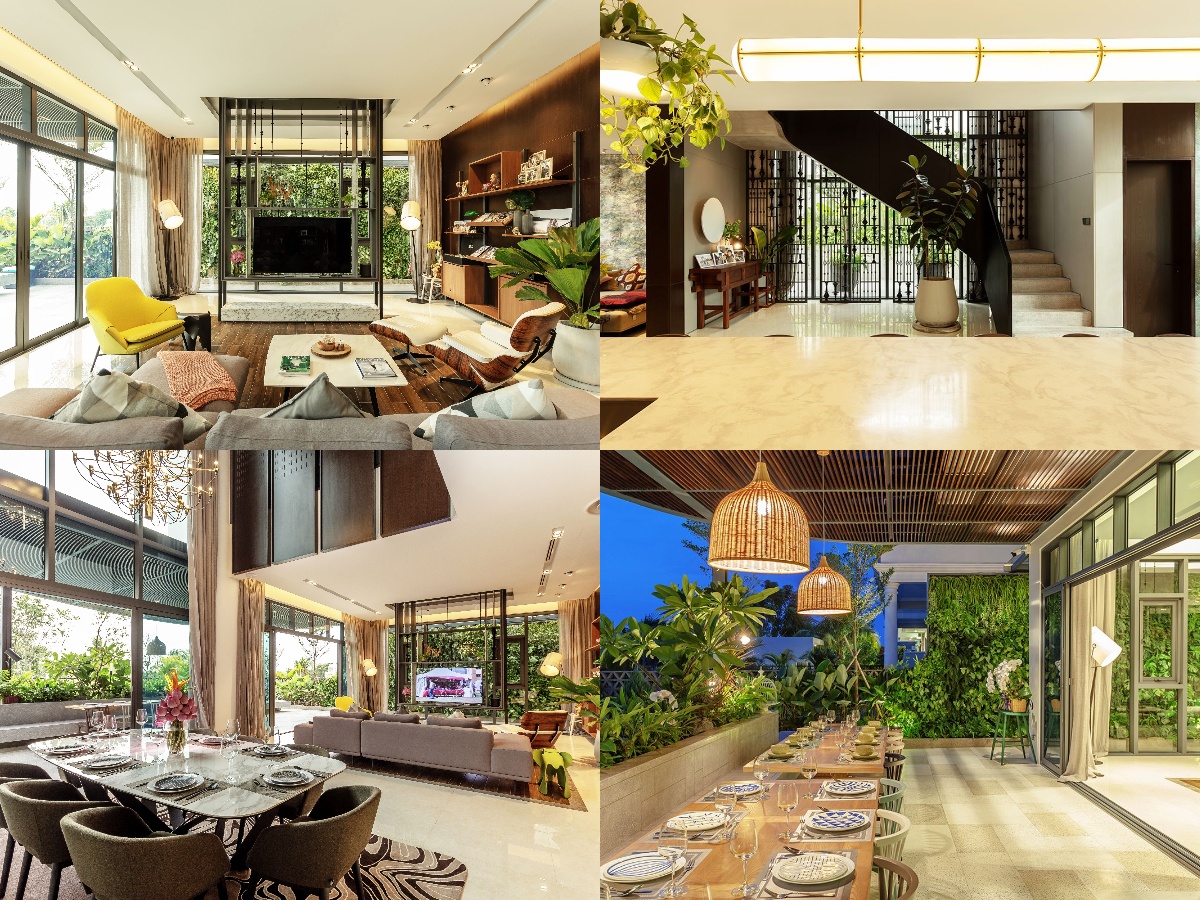 House 15 has undergone a total interior renovation that aims to connect indoor and outdoor living spaces by providing unique views and focal points at various spots. Chansan relates, “The interior design theme is carefully curated to embody the concept of a modern tropical home with a sense of tradition.” Re-Edge accomplished this through the contrast of sharp, clean contemporary edges and the lushly textured screen elements typically found in traditional homes. Indoor plants extend into the exterior landscape design, creating a seamless spatial transition. The landscape design incorporates tropical foliage, shrubs, outdoor canopies, terrazzo finishes, benches, and a swimming pool. 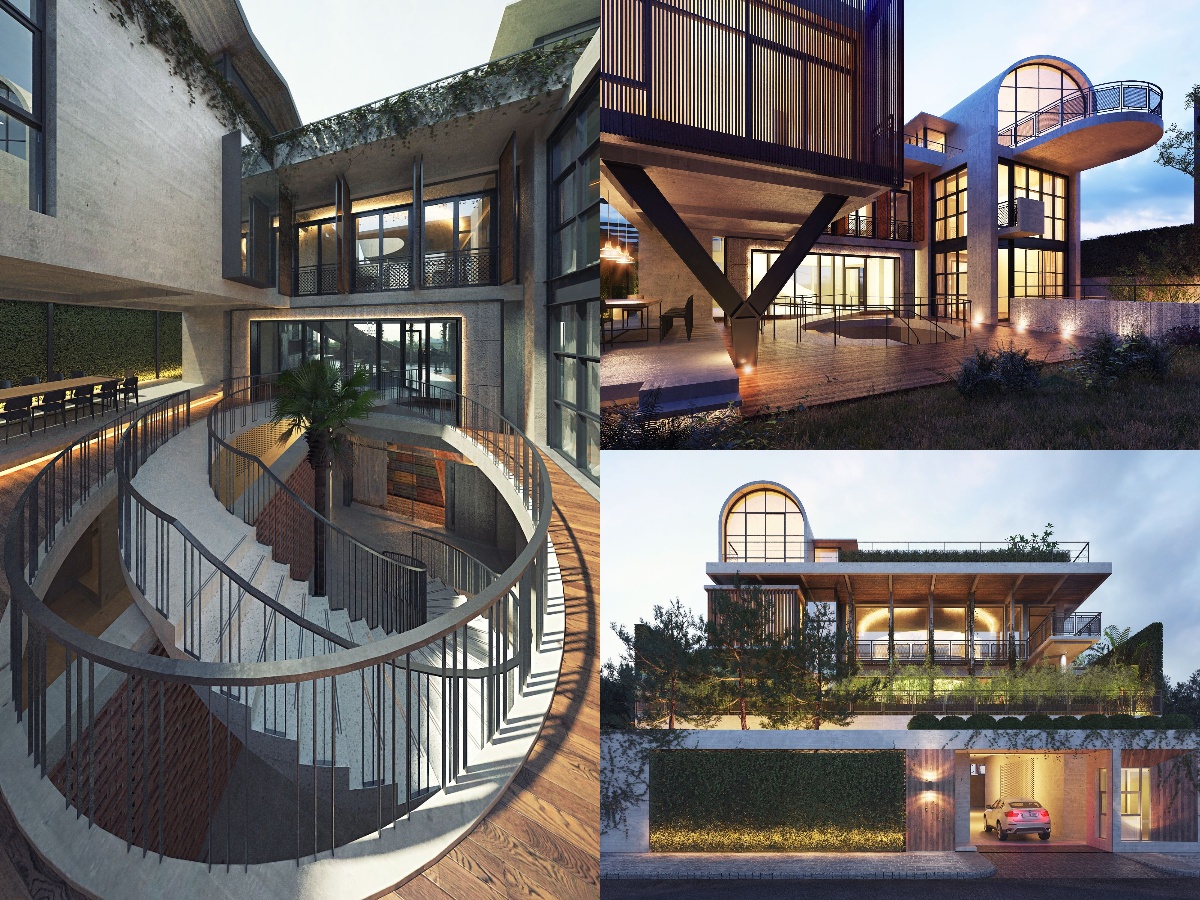 Located in the heart of Phnom Penh, the design plan for the Toul Kork residence is ambitious. “We were inspired by the environmental factors of the site, the vernacular of Khmer architecture and the New Khmer Architecture style of the 1960s. The goal is to not only make this a home, but a journey and a place for inspiring the future of Cambodia and architecture in Cambodia,” he says. “The raised ground floor reflects the traditional Khmer house and the loop connects all the floors together by creating a visually dynamic space. The exterior façade showcases deep shadow lines and a rhythm of vegetable columns that answers to the style of the new Khmer architecture.” 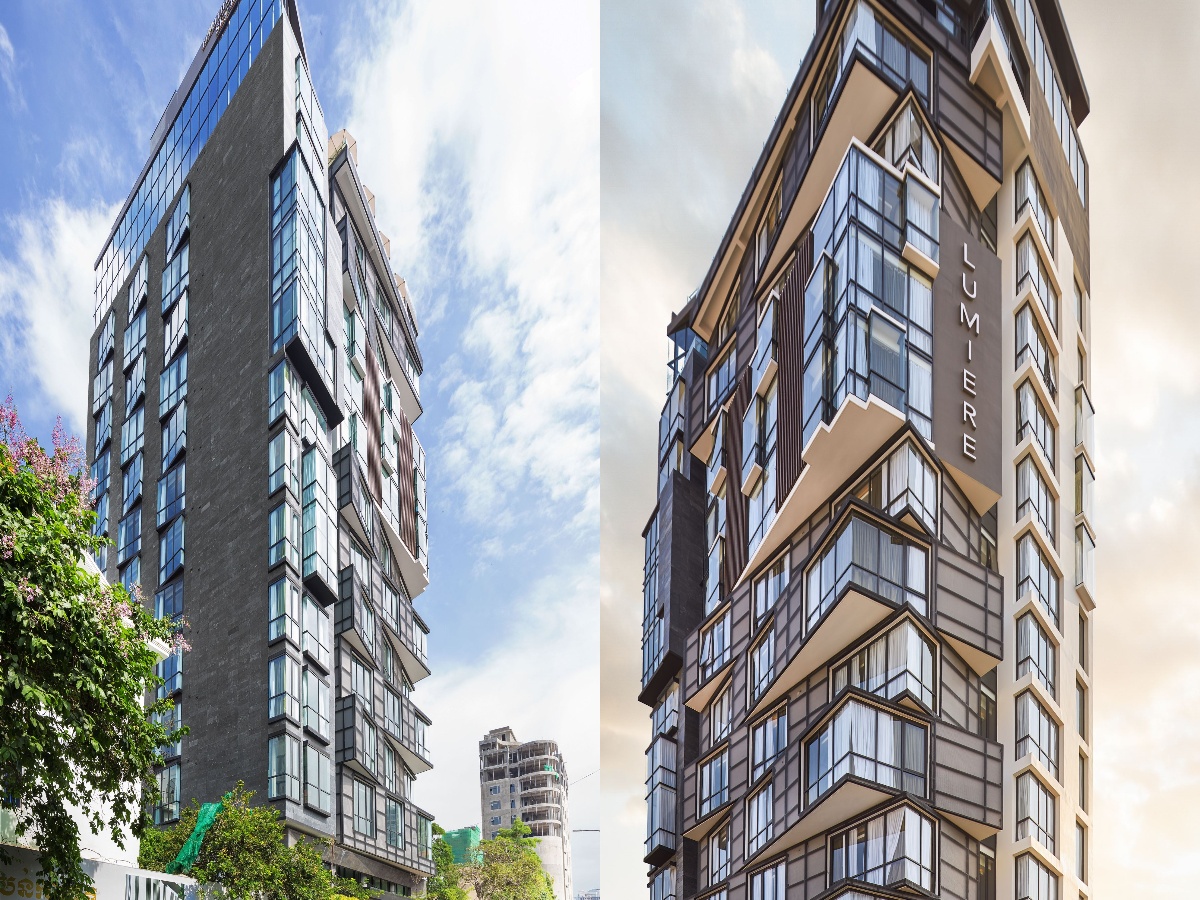 The sleek and stylish 16-storey boutique hotel holds a special place in Chansan’s heart, as it was the first commercial project that put his firm—and consequently, Cambodia’s design scene—on the map. “That’s when Re-Edge became recognized locally and among our neighbouring countries,” he says. “It was and still is a difficult time for local architects to make a profit, as well as to gain enough trust from clients to be able to complete something like Lumiere. We were sort of at that right moment, and even opened the door to many other local talents as well.” 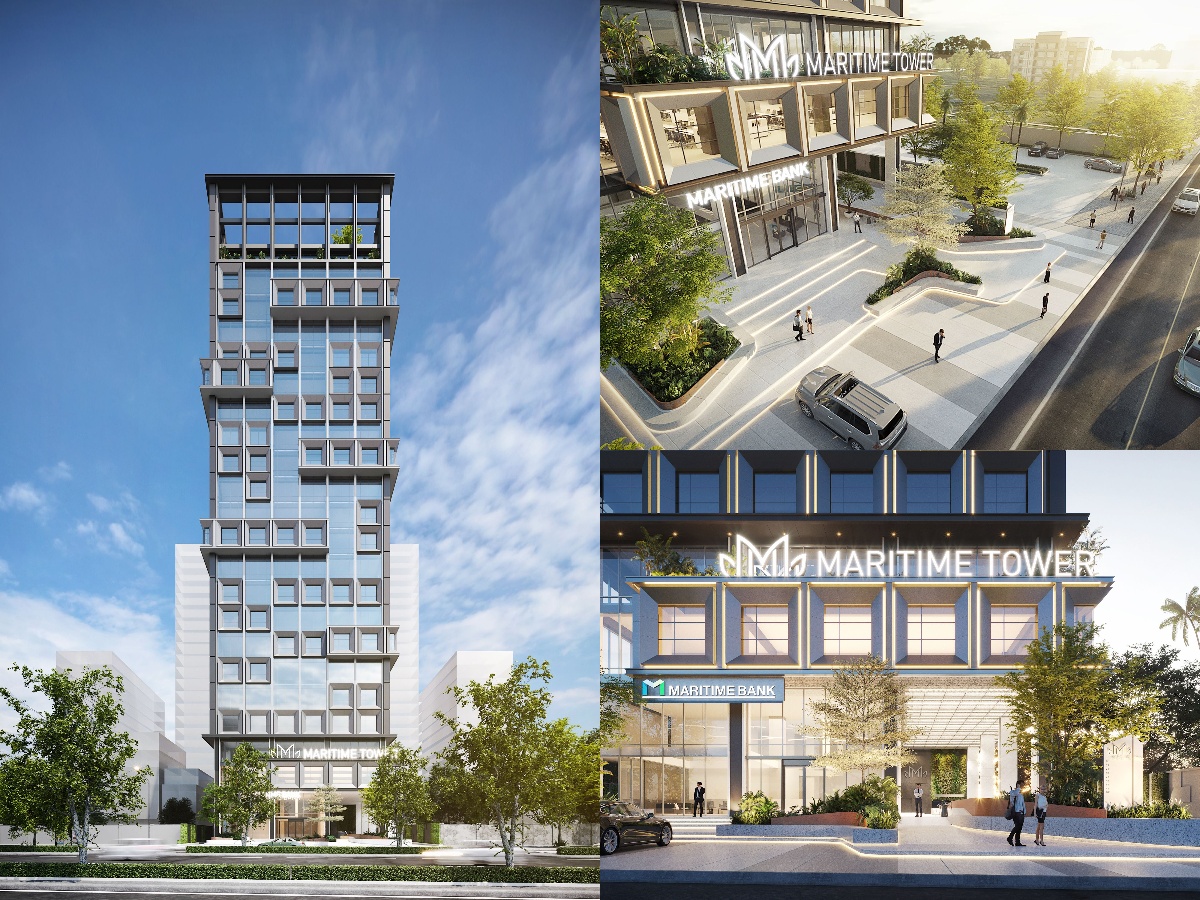 “The Maritime Tower will stand tall and dignified, dressed in a well-detailed grid and glass façade,” Chansan says of this dazzling USD30 million office building that broke ground earlier this year on Phnom Penh’s Hun Sen Boulevard. Although a glittering, glass obelisk is often inherently intimidating, Chansan went to great lengths to make it feel more approachable. Visitors will enter through a pedestrian plaza dotted with leafy trees. An irregular grid pattern will lend dimensional variability to the 24-storey tower, creating a more dynamic space. 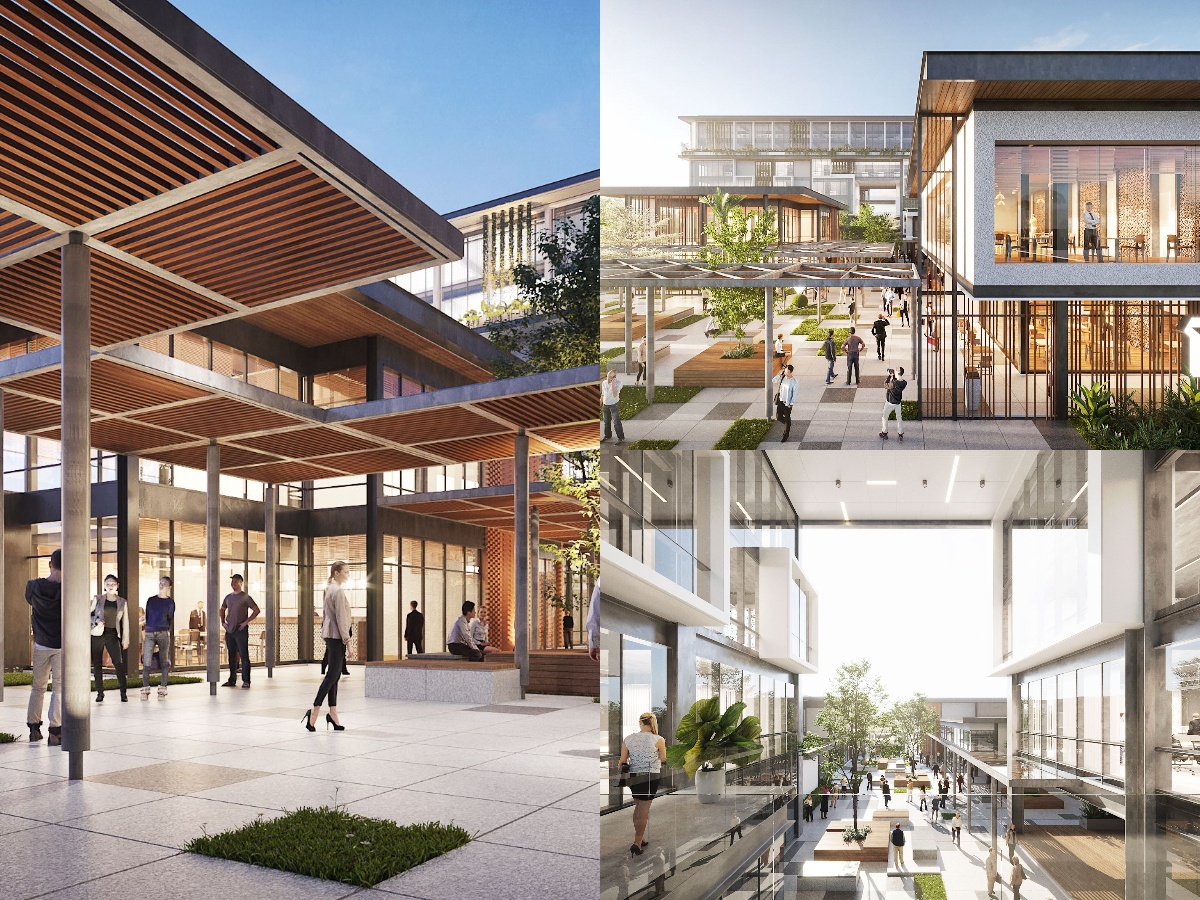 This six-storey, mixed-use development challenges and reimagines the conventional shopping centre. While The Point Community Mall on Mao Tse Toung Boulevard, which is slated for completion by the end of the year, is a place of commerce, it also serves as a modern reinterpretation of the public square. While many luxury malls in Asia-Pacific bear a similarly artificial aesthetic covered in the token trappings of opulence, these low-rise buildings with prominent roof overhangs, many of which will be strewn with vegetation, emphasise the importance of the natural world. Unlike malls that eschew windows in order to deprive shoppers of a sense of passing time, these airy, open interiors are flooded with natural light. 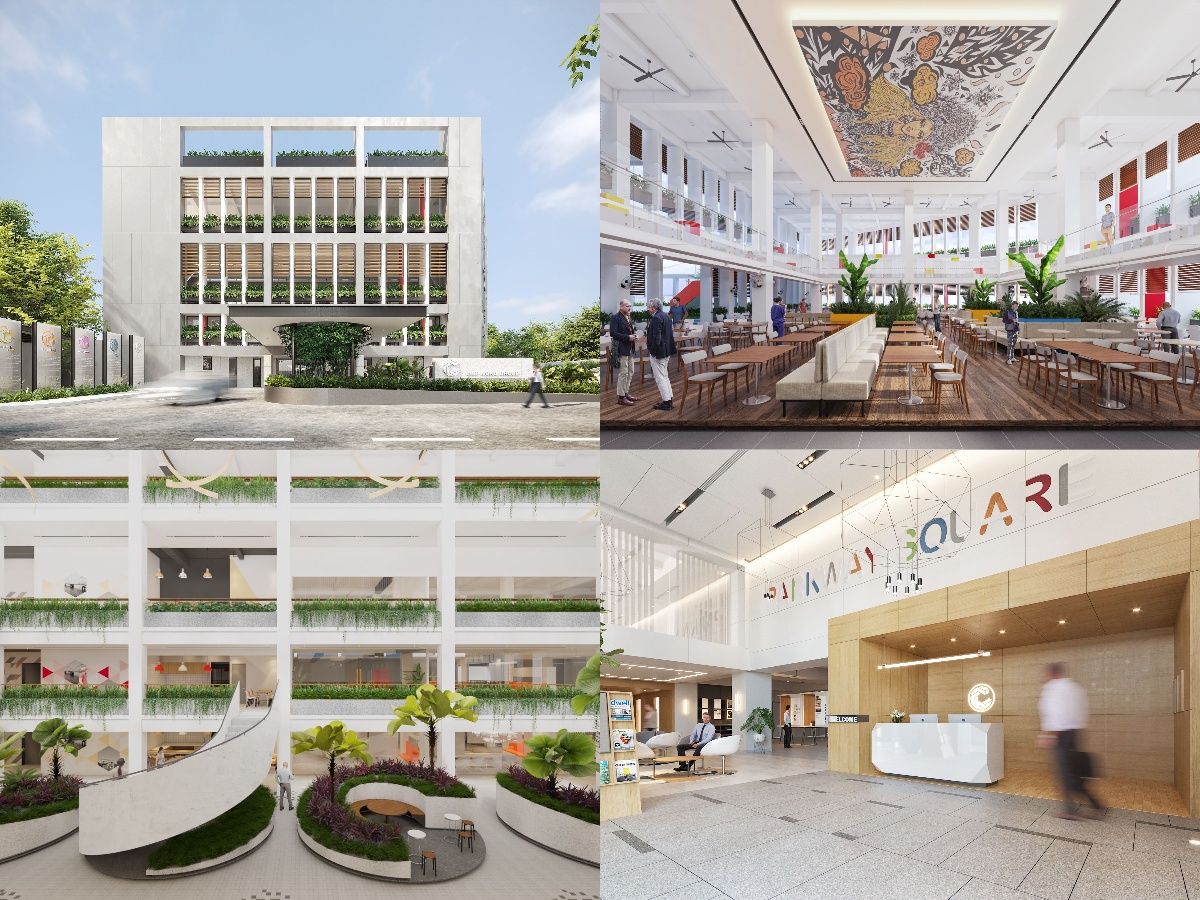 When Chansan and the architects at Re-Edge agreed to transform the old Parkway Mall into a sleek, modern office space for the Chip Mong Group, they knew it would be a challenge. Though the old commercial structure had been on trend when it debuted in the early 2000s, the design now feels dated and in desperate need of a refresh. Chansan immediately decided to anchor the design around an airy, open courtyard teeming with plants. This lush, sun-drenched green space provides a psychological sanctuary for busy executives and embodies the kind of forward-thinking approach that the tenants hope to convey.

This article originally appeared in Issue No. 155 of PropertyGuru Property Report Magazine