With Sri Lanka emerging as an architecture hotspot, Director and Principal Architect Nandike Samaranayake is honouring the remarkable architectural legacy of Geoffrey Bawa through his work 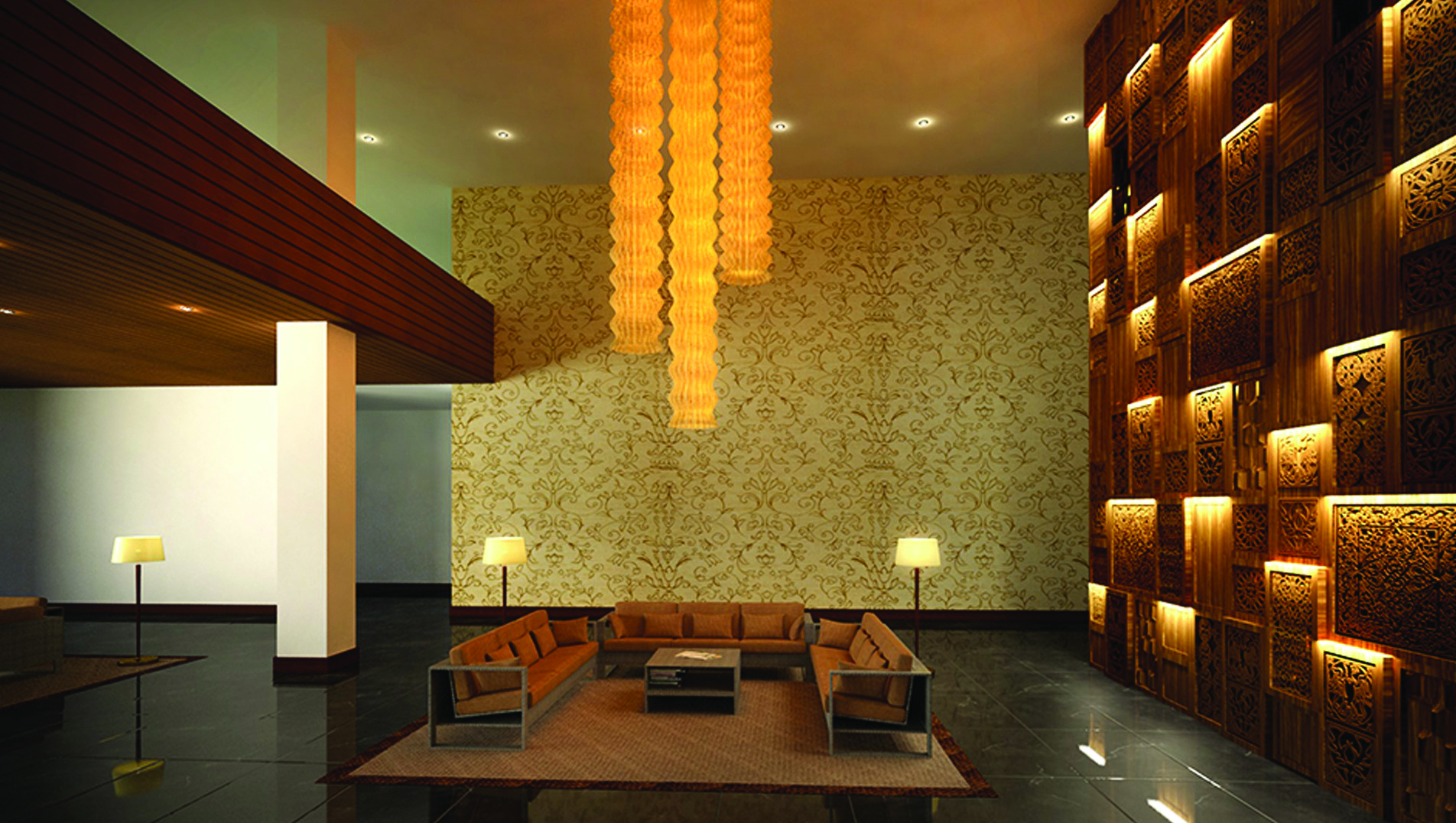 When it comes to architectural design in Sri Lanka, the legacy and influence of Geoffrey Bawa are inescapable. Born Deshamanya Geoffrey Manning Bawa in Colombo, he single-handedly created tropical modernism, an architectural style that exerts considerable influence all over Southeast Asia to this day. The combination of clean lines, muted hues, and local wood, stone, and other materials conveys a level of sophistication and regional specificity that is unrivalled.

“Geoffrey Bawa started practising in a time when there were major economic restrictions, so a lot of his architectural decisions were influenced by the materials that were available in Sri Lanka at that time,” says Nandike Samaranayake, director and principal architect at ACS Integrated, one of the island nation’s most respected practices. “I think the restrictions that he faced helped inspire the extreme talent that he had.”

Samaranayake has a deep-rooted admiration for the master designer. Colonialism throughout Southeast Asia fostered a tendency to turn to western aesthetic and cultural ideals. When the British, French, and other powers arrived in the region, they sought to recreate the architecture of their homelands and touted it as inherently superior. Bawa, in contrast, borrowed elements from international vernacular architecture while putting a distinctly Sri Lankan twist on them.

“He was a master of understanding and applying certain traditional materials, proportions, and use of space,” Samaranayake says. “He also incorporates colonial influences. We had Dutch and Portuguese occupations. By marrying these styles to local materials, he created a uniquely Sri Lankan style.”

Today, examples of tropical modernism are ubiquitous throughout Sri Lanka and celebrated throughout the world. Yet for all of Sri Lanka’s architectural splendour, the nation did not have the chance to realise its full potential for decades. From 1983 to 2009, a bloody civil war ravaged the country and put any ambitious development projects and tourism plans on pause.

“Sri Lanka was in suspended animation for 30 years because of the internal conflict,” Samaranayake says. “There was very little development and even the tourism was affected deeply during this time.”

Lately, thanks to an extended period of peace, Sri Lankan development has finally hit its stride, albeit with a few setbacks. The nation boasts a stunning array of wildlife, breathtaking coastlines, and all manner of other attractions to lure affluent international tourists and investors. Stability inspires confidence and it is not difficult to see how Sri Lanka is ripe for the sort of development that has revitalised other nations in the region.

“If it wasn’t for the pandemic then Colombo would be pushing ahead with its development,” says Samaranayake. “It’s happening, the infrastructure is in place. It’s actually in a good position overall, but it’s not a good time in the world in general.”

They used to say that anything on the shoreline should not be higher than a coconut tree, so we had to change that mindset to get things done. It was time to bring proper commercial development to Sri Lanka because we have some of the finest beaches in the world

Although the pandemic has certainly put the brakes on projects, Samaranayake maintains that there is light on the horizon. The last few years have seen a spate of new high-end, eco-chic resorts opening in Sri Lanka. Outside investment has serious potential, but much of the investment in Sri Lanka’s nascent luxury residential market is coming from within the country.

“There’s potential in the luxury residential market here,” Samaranayake says. “Think of it in these terms: Luxury condominiums are desirable for locals who have disposable income.”

In many cases, some of those locals have inherited land from their families and want to sell it to invest it in something more stable. Luxury condominiums are a particularly appealing option.

“We have a population of 20 million,” he says. “Imagine that just 1% of the population has money that they want to invest. Then you have 20,000 condominiums that could be sold and there aren’t 20,000 luxury condos currently in Colombo.”

“They used to say that anything on the shoreline should not be higher than a coconut tree, so we had to change that mindset to get things done,” Samaranayake says. “It was time to bring proper commercial development to Sri Lanka because we have some of the finest beaches in the world.”

Those beaches may someday host some of the most stunning resorts and condominiums in all of Asia. A new generation of designers and architects are ready to take on Bawa’s mantle in new and visually striking ways. 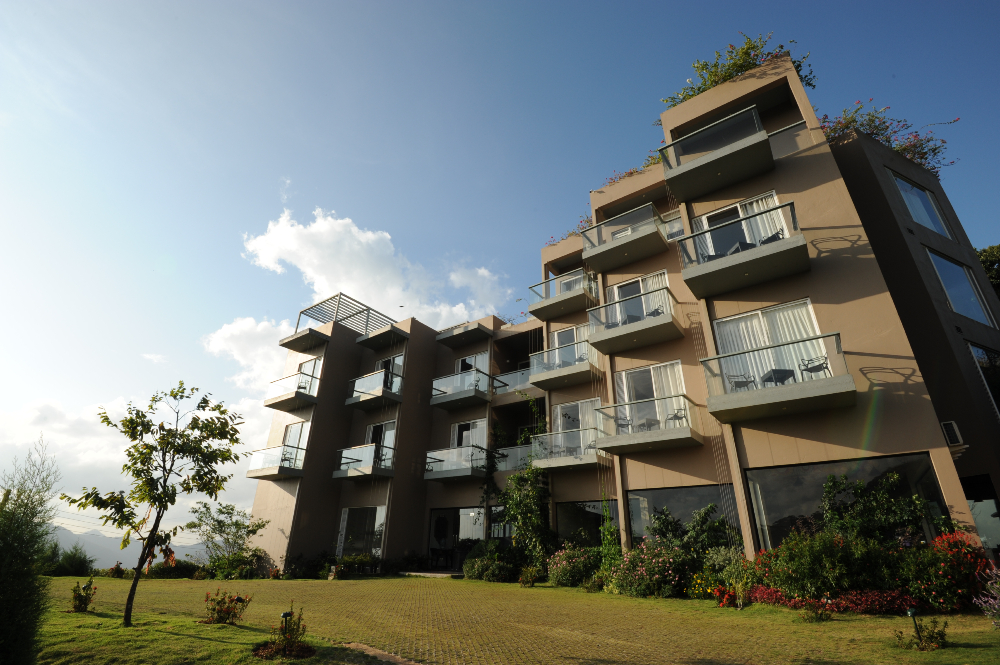 “Geoffrey Bawa incorporated traditional arts and crafts like batik into hotels. It was quite a hit because it highlights local craftsmanship,” says Samaranayake. Similarly, he incorporated several nods to the local culture into this stylish boutique hotel in the rolling hills around Kandy. “In Skyloft, some of the ceilings are painted like they are in the temples,” he says. “I wanted to embody the concept of a ceremonial procession but to do so in a somewhat more abstract manner. We commissioned a local artist to do a line drawing that captured some of that feeling.” 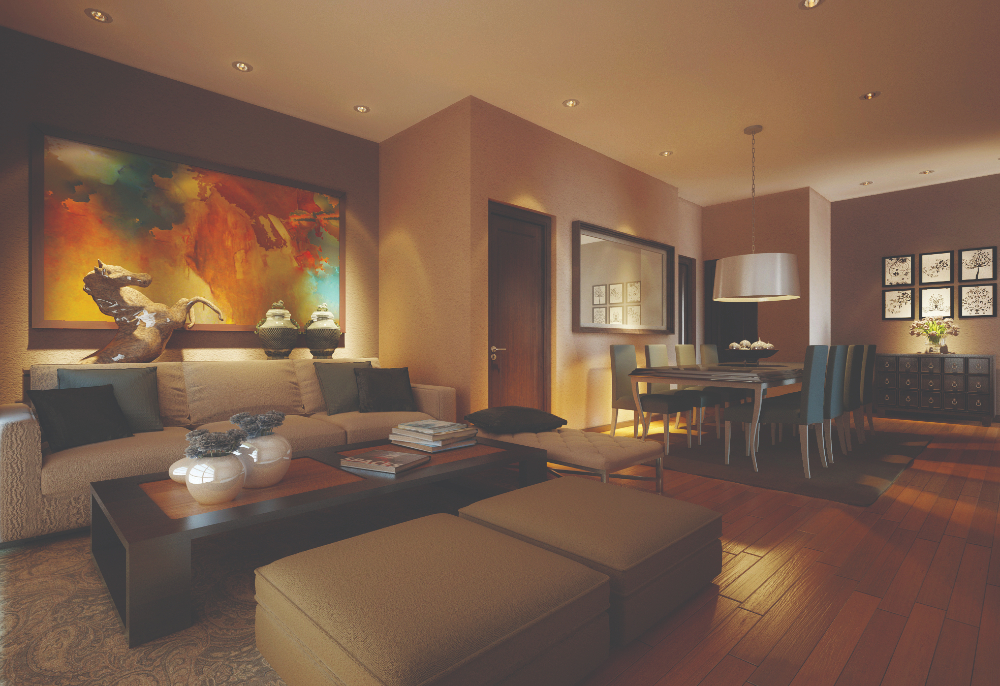 The early plans for this ambitious, mixed-use development came with a few fundamental flaws. “I had to point out that most of the units that they had planned were facing each other, so there was no privacy,” he says. “I told the client that they needed to rethink this. Then I pointed out how you can maximise the views by creating a view towards the outside, so we had to entirely redesign the towers from the ground upwards.” The result: Apartments with a view and considerably more of a sense of seclusion for residents.

“We were lucky enough to be given the opportunity to collaborate on this project,” Samaranayake says on working alongside celebrated firms MVRDV, who had authorship of the building as well as its concept and schematic design, and PWA Architects, which were involved with landscape design and the design of the interior of the ground floor lobby. Upon completion, the M2M Verandah Offices promise to be an über-modern workspace, with bright, airy interiors and plenty of places for conferences, as well as organic meetings and exchanges of ideas. Clean lines, natural lighting, and geometric shapes all contribute to a stylish, contemporary environment engineered to help foster innovation. “It was quite an experience working with these giants of the architecture world,” he says. 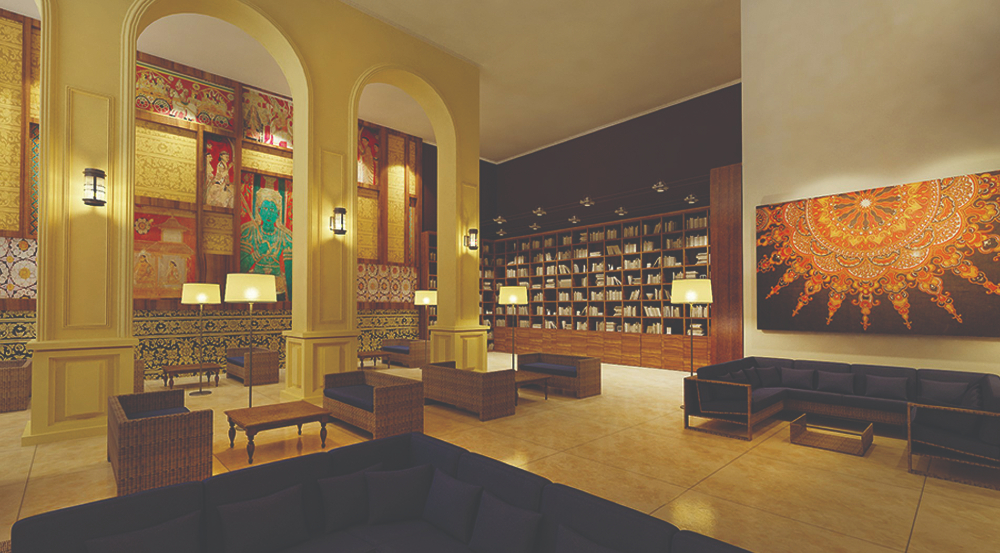 Although this university teaches other disciplines beyond Buddhist studies, it was important to the client that the design embodies a sense of harmony and serenity. “If you look at the layout, you’ll see that all of the feng shui is there,” Samaranayake says. While the initial space was striking, it felt too aesthetically tied to Chinese history and culture. The challenge was to craft something with a greater sense of place, without sacrificing the elements of feng shui that had been carefully incorporated. “We had to make it look and feel more Sri Lankan. One of the things that the donors insisted on was the golden roof tiles.” 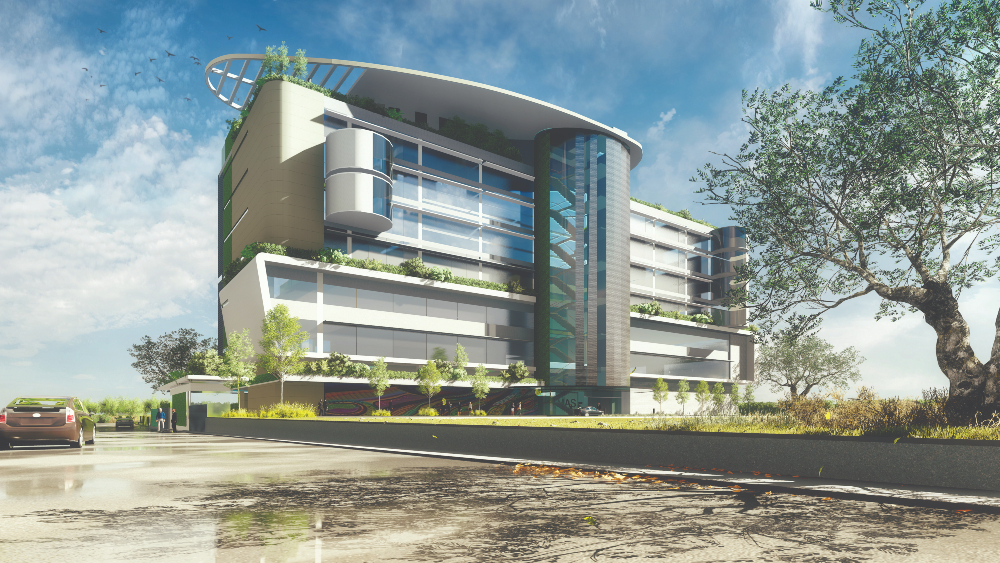 MAS Holdings, a prominent garment manufacturer, wanted a truly eye-catching space to expand its corporate future. Although construction is currently on hold, the glass-encased, undulating structure is already poised to become a true statement space. The project is a collaboration with RKA India, whose architect Ragi Kadiragamar has been lending his signature touch. 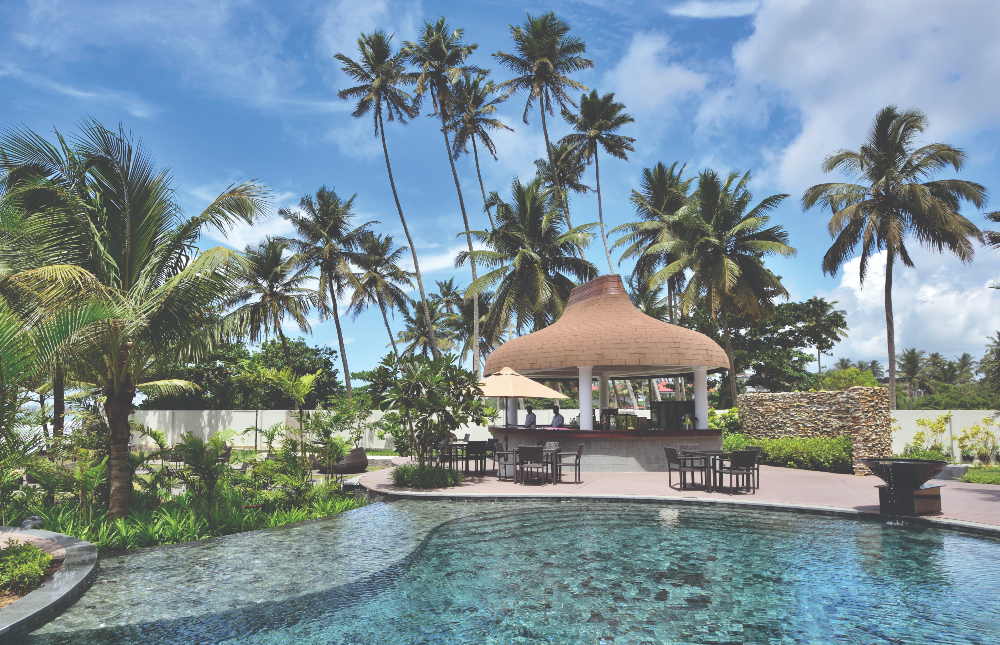 “You will find that many Marriotts look similar because the requirements are somewhat regimented,” Samaranayake says. He wanted to find a way to make the hotel stand out while remaining within the hospitality behemoth’s strict guidelines. “Half of the building was facing the sea and half was facing the landside, but they wanted all the 200 rooms facing the sea.” By rearranging the layout, he created a resort that made better use of its location. Like Bawa, he also incorporated distinctive local materials. “In the treatment of the facade, we used this lava stone, which is lighter than granite. We had to work on the anchoring for it because it’s close to the sea, which can be quite corrosive.”

The original version of this article appeared in Issue No. 168 of PropertyGuru Property Report Magazine.
Write to our editors at [email protected].