Africa-born, raised in Italy, and Philippines-based for 23 years, Carlo Cordaro has worn many hats in his time. With his first urban resort, Asmara, one of the latest strings to his bow, the polymath discusses life as a designer, architect and entrepreneur 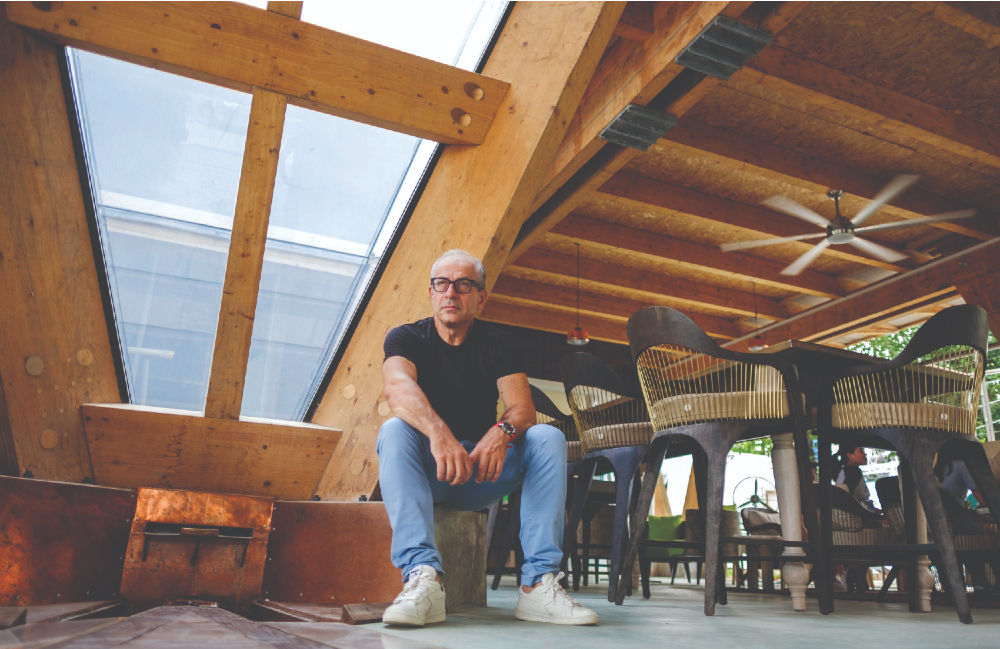 Looking around Carlo Cordaro’s artful residence in Cebu, which affords a wraparound view over lush tropical jungle, you’d be forgiven for mistaking it for the premium pool suite in a luxury Balinese hotel. Clearly, a rigorous scientific thought process has gone into its geometric interiors and sustainable construction—which is why it’s hard to believe this is the work of a man who spent the first half of his career as a financial analyst.

As it turns out, Cordaro’s domicile in Banilad, Cebu is not the only surprising thing about this polymath who’s now a designer, architect and resort owner in his own right. In the aftermath of the Italian imperial era in eastern Africa, Cordaro was born in the country now known as Eritrea before repatriating to Italy, where he embarked on a career in finance. It was only on an assignment in the early 90s—when he was hired to restore profitability to a troubled company dealing in wooden-surface treatments—that he chanced upon his true vocation.

Cordaro became obsessed with local materials like coconut and bamboo, transforming them into elegant items of furniture, which led to prestigious commissions from the likes of Verona’s Hotel Concorde. Eventually, he was invited to join Movement 8—an exclusive group of designers promoting avant-garde Philippine furniture—after which he started Atelier-A in 1999, producing bespoke pieces for upmarket corporate properties.

His two-year-old Asmara Urban Resort, named for the capital of Eritrea, is an unusual hideaway in a number of ways with its pyramid-shaped architecture and eclectic interiors, but is also an apt summation of Cordaro’s design journey over the last two and a half decades. The use of sustainable local materials such as abaca, pinewood and energy-saving “glulam” (glue-laminated) timber, as well as water-catchment features, is complemented by furnishings and design details that pay homage to craftsmanship in all three of Cordaro’s homelands.

There are design features at your urban resort, Asmara Urban Resort & Lifestyle Village, that pay homage to Eritrea, where you were raised. What memories do you have of your childhood in Africa? Were there many Italian families living there at the time?

My memories start when I was five years old—I met my great-grandmother when she was 96 and living in Asmara, the capital city of Eritrea since 1892. She was the young spouse of an Italian field engineer sent for the first Italian government scouting missions in Africa. They climbed the Eritrean highlands up to an altitude of 2,450 metres, where the city of Asmara was founded.

My grandmother (born in 1910), my mother (1933) and myself were all born in Asmara. At the peak of the colonial time, the Italian population there reached about 40,000. When I was a child and left the country, there were fewer than 3,000. Asmara was a perfect Italian city with a school, university, hospital, and factories of all kinds, from food to textiles to leather shoes and cars. It was called “La Piccola Roma” since it was, and still is, a beautiful city. In 2017 it was inscribed on Unesco’s World Heritage list as an exceptional example of early modern urbanism from the beginning of the 20th century and its adaptation to an African context.

You first came to the Philippines in the mid-1990s, and have now been there for 23 years. What was it about Cebu in particular—as opposed to, say, Manila—that made you settle there for the long term?

I came to Cebu as a financial analyst to do due diligence for a sliced-veneer company, Cebu Fil Veneer Corporation, a pioneer Italian manufacturing plant in the Philippines Economic Export Zone. Since then, the people, the city, and the love I discovered for the natural materials—the fibres, the wood—and consequently the technique made me more and more involved in the company.

From being a consultant, I acquired the company in 2000. It was not really a decision I’d anticipated, but Cebu and the factory absorbed me completely. I never compared Cebu to Manila or to other cities; I was living in Rome and had no plan to move abroad. It just happened!

How did you make the transition from being a self-taught furniture designer to designing buildings?

I have changed quite a lot. I went from being a PhD economics graduate to designing furniture, houses, and buildings. Next I’d like to do something different related to urban planning in the big tropical cities of the Philippines.

With Asmara, how did you go about marketing the resort?

It was more than just marketing. [In building Asmara] I was partly advocating a model in the Philippines that could blend the beautiful tropical nature with building eco-resorts in the islands, where the construction is not that easy to do. The Asmara model is usable anywhere in the planet: from big cities to a beach resort, even a ski resort.

It is challenging and fulfilling to marry both worlds—Rome and Cebu—to create something new. I wanted to create a real, sustainable building that blends with the beautiful look of the Philippines

Asmara combines sustainable architecture and design credentials with great versatility. What kind of clientele are you aiming to bring there?

Having turned 50 some time ago, I decided to challenge myself and see if I could capture the new trends of this evolving society. Asmara so far is gathering everyone, from the millennials to the oldest generations, from students to professionals, all nationalities—Europeans, Japanese, Cebuanos—blending together. The “plaza” concept appeals to a cross-section of guests of various nationalities, age brackets, and lifestyles.

The basic concept is quite simple: great music and atmosphere, authentic Italian food, and amazing craft cocktails like in the 1960s in Milan. There are parties, corporate events, painting exhibitions, and gatherings of all kinds, along with tennis, squash, yoga and free dog training!

How does Asmara fit into the lifestyle resorts sector in the Philippines?

In some way I would like to trace a new path for the resort. I designed something “out of the box”, something that’s small in scale, but can still host a great crowd, and interpret the old Filipino way with the lanai (multi-purpose deck) in a semi-open space. We have more versatile and less boring common areas. In Asmara, the crowd is part of the lifestyle. People are protagonists of good moments of life, not only spectators of a huge shiny lobby like in traditional hotels.

In Asmara, as well as in the practice as a designer, it is challenging and fulfilling to marry both worlds—Rome and Cebu—to create something new, and yet familiar to a Filipino, or to an Italian. As a main objective, I wanted to create a real, sustainable building that blends with the beautiful look of the Philippines.

With its discreet location, strong design sensibility and tropical surroundings, your own home in Cebu is something of a mini resort in itself. Did you build it, in a sense, as a kind of reflection on your own life, with its equally European and Asian influences?

I love your question: yes, it reflects 100 percent myself. Discreet, a bit hidden, but with strong values and deep, well-studied elements all combined together. It was a super-scary task to decide the size of the bar counter, the bar stools, the lights, the concept. As my daughter Camilla says, “Papa, all that you do, you do with your heart and in your hands.” A lot of passion and dedication to build all this for the city and the people who hosted me peacefully for 23 years!

You have had quite an unusual career progression. How would you describe yourself these days—as a designer, an architect, an entrepreneur?

Your last question is hard to answer, but I’ll try. I’m a free, passionate visionary in continuous search of beauty, with a deep acknowledgement of anything I create or design.