In business, as much as we claim to be open to new innovations or advanced methodologies, we would always turn to the least risky option – and rightfully so, seeing as change meant potentially losing valuable work hours, manpower, and capital.

Be that as it may, new tools or processes often lead to improved productivity and greater savings if implemented correctly.

This is the case with green buildings in real estate.  The industry alone is complex and tricky as it is,  consistently demanding developers to manoeuvre a wide array of financing problems, commercial feasibility issues, regulations, and the like.

With the dire impact of climate change manifesting all around us, the real estate industry has a major role to play to mitigate the adverse effects. But who are we to compel them to make a change when they are the ones staking all their resources?

At the first virtual edition of the annual PropertyGuru Asia Real Estate Summit, Prashant Kapoor, the chief industry specialist for green buildings and climate-smart cities at the International Finance Corporation (IFC), a member of the World Bank, answers the Whys and Hows of green building and green financing.

From designing and planning to construction and maintenance, building green will involve more resources than what is normally asked for. “But what if I say to you that there is simply too big an
opportunity to miss,” pressed Prashant. “There is a huge opportunity in terms of investments, but also to reduce climate change impacts.”

According to IFC’s analysis, green buildings are a USD24 trillion investment opportunity in emerging markets, making it one of the top priorities for investment.

During a business development trip in South Africa, Prashant noticed that most developers’ portfolios consisted of affordable housing. Once he introduced the idea of affordable green housing, he shared that he was mostly met with doubt and cynicism.

Nonetheless, they were able to persuade the creation of an affordable housing fund called the International Housing Solutions, which aims to build 2,000 resource-efficient homes through the use of EDGE,  an app developed by IFC that is both a universal standard and a certification system.

He revealed that the fund managers were concerned as they did not only have to prove to themselves that the projects were worth it, but they also had to persuade their project development partners. Eventually, all parties took a chance and seized the opportunity.

Baldwin Properties, one of the biggest residential developers in South Africa, works with the housing fund. The success of their green developments inspired the CEO to certify 16,000 units throughout 10 of their projects across the country.

“As you can tell, all of these situations have nicely snowballed into a market transformation and we have since been able to replicate this kind of outcome in other places in Asia, Latin America, and other parts of Africa,” continued Prashant.

Going green did not only benefit developers and banks, but also homeowners of green residences who reported 40 percent savings in utility bills. 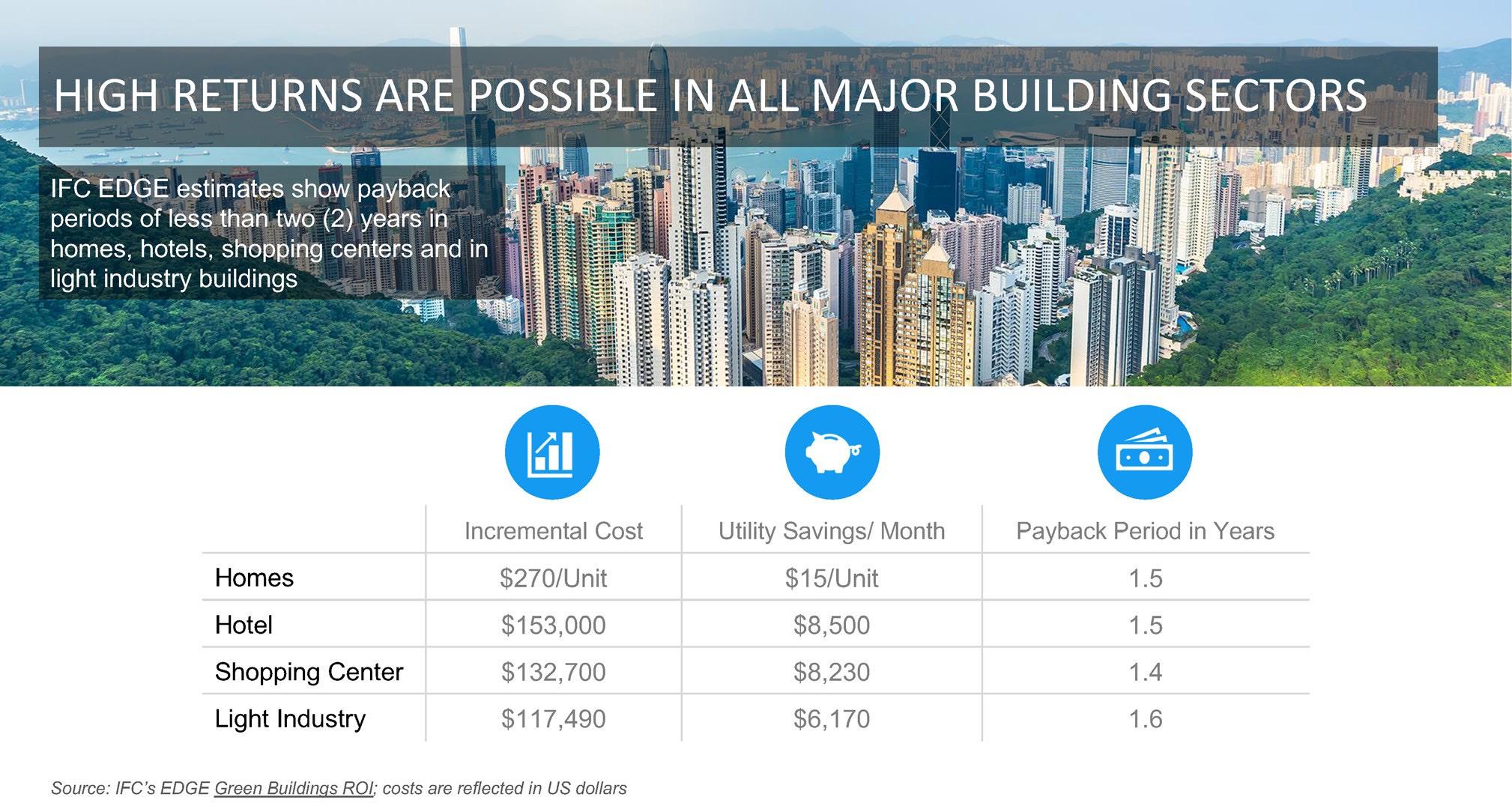 Aside from proving that green buildings are a worthy investment, Prashant shared that IFC has been trying to break down all the barriers that have prevented the industry from taking a plunge by coming up with solutions that would make the process easier and more affordable to everyone.

They also had to find a way for developers to showcase their green credentials, which is why they established the existing green building certification programmes like LEED. However, they found that the existing ones are too daunting, expensive,  complicated, and time-consuming for their client’s mainstream projects.

“Emerging markets, where most of our buildings happen to be, require a simple, quick, and affordable rating system to make it accessible,” he explained.

And that is how EDGE came to be. This tool allows developers to input the building type and location;  calculate the energy, embodied energy, and water usage of the building; apply for the EDGE standard; and optimise for the lowest cost – in just a few clicks.

Prashant added: “Since the launch of EDGE, IFC’s been able to invest in green building projects, such as schools, housing, hotels, offices from our old account, as well as through investments in banks. So far, IFC has deployed USD6 billion in green building investments.”

With green buildings, cost outcomes and monetary gains have always been a concern. Fortunately, growing evidence across several markets reveals that the incremental cost of building green is much lower than what most assume, particularly when green measures are adopted early on in the design and planning stage.

According to IFC, only around one to two percent of the construction cost is devoted to the greening of affordable housing projects. This seemingly small percentage can actually yield high returns to building owners across major sectors in real estate, whether residential, commercial,  or industrial.

But what better way to illustrate the point than to share some green financing success stories of their clients:

Asia Green Real Estate, a company that invests in building projects across Asia, has discovered a winning
strategy to appeal to institutional investors. This asset manager provides opportunities to private and

institutional investors who are looking for both financing and sustainability returns.

To attract capital from investors and establish a strong portfolio, they managed to become an EDGE Champion, which meant that all their projects that qualify for financing must commit to the EDGE standard before any transaction proceeds.

ArthaLand is a pioneering developer in the Philippines that built the Century Pacific Towers, the first green-certified zero carbon building in the world. To finance this construction, they used a green bond that received such high demand, enabling them to raise USD59 million.

In 2019, the developer took home the Best Commercial Green  Development (Asia) title at the PropertyGuru Asia Property Awards Grand Final, further proving their reign in terms of sustainable developments across the region.

To get started on the journey toward  fighting climate change, Prashant shared the following guidelines:

1. Meet green building definitions compatible with the financing industry. The project or development must be at least 20 percent resource-efficient and must be certified as green by a reputed body.

2. Start planning a vision for the future. Instead of choosing a few flagship green projects, he suggests taking a portfolio approach. One must keep in mind that investors are already asking, “We like that you have a few green projects, but what are you going to do in order to get us to the Paris Agreement in 2030/2050?”

3. Reach out to banks and investors. Find someone who will be able to support you financially or provide free technical assistance. You can even urge your real estate association to convince the banks to create green building products, which will benefit you, your bank, and your customers.

A huge number of green developments have been popping up throughout the Asia Pacific region in the past years. And as these numbers grow, the processes and resources of going green will be even more accessible and affordable for everybody.