Acclaimed Thai practice Department of Architecture Co. conceptualises a compelling blend of history and modernity with the second edition of a hip Bangkok community mall 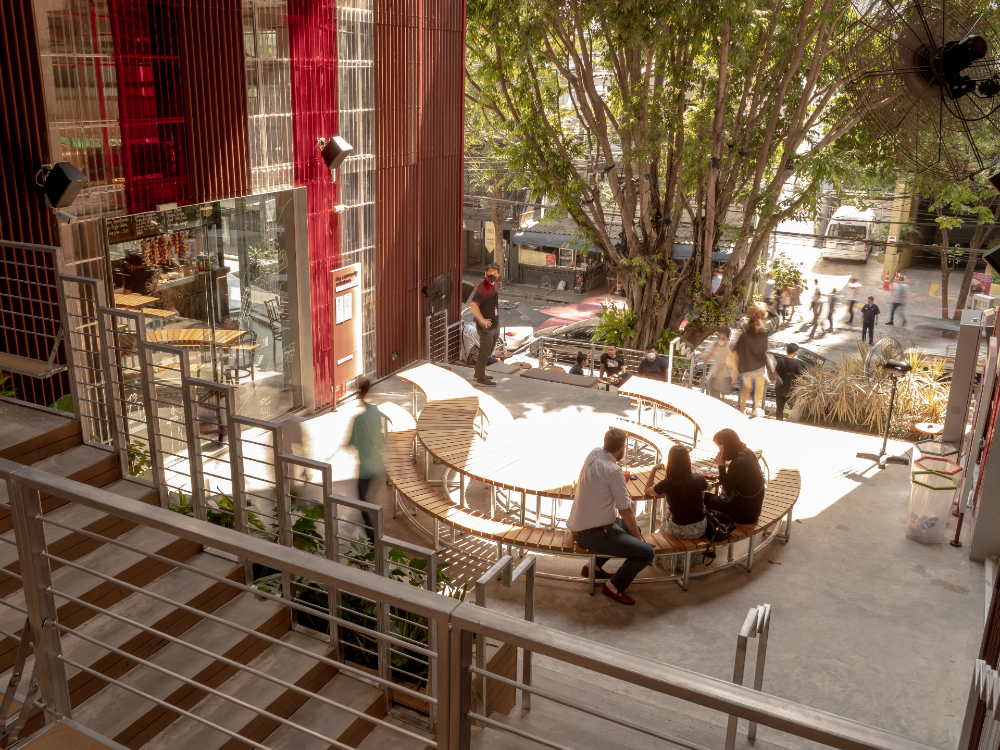 Bangkok brims with malls. From colossal riverside complexes like IconSiam to stalwarts such as Siam Paragon and Centralworld, the Thai capital is full of air-conditioned temples of consumerism. Less brash, and perhaps more compelling — at least to the city’s legion of hipsters — are more than 100 community malls: small shopping destinations characterised by open-air layouts, local eateries and bars, and lots of foliage—a loose play on the American community centre.

Bullish on the Thai capital’s thriving retail sector, brother-and-sister tandem Varatt and Vicharee Vichit-Vadakan established one such mall upon their return to Bangkok from America. The Commons, a 5,000-sqm loft-like retail development, opened early 2016 in the city’s tony Thonglor neighbourhood, purveying casual and conceptual F&B outlets including the siblings’ own Roast, a casual all-day bistro, and its coffee-driven sister, Roots Coffee Roaster.

On February 27, the duo launched the community mall’s second branch in Saladaeng, a pocket of the Thai capital hemmed in by the bustling Sathorn and Silom districts. While decidedly smaller than its Thonglor predecessor at 3,000 sqm, The Commons Saladaeng is well-located and has already established itself as a hub for both dining and events ranging from workshops to live jazz performances.

Department of Architecture Co., the design firm behind the original Commons, was tapped not only to shape the project but to scout for land plots. The studio, led by Ivy League alumni Amata Luphaiboon and Twitee Vajrabhaya Teparkum, pointed the developer to the mall’s current site at Saladaeng Soi 1—a leafy alley behind their headquarters.

“We were on board without a formal assignment,” relates Amata, principal and co-founder of the design studio. “We already understood the essence of The Commons quite well. We are also very familiar with the neighbourhood as we actually are ‘Saladaeng people.’”

Saladaeng is a crossroads of sorts for the mall’s target audience, according to Amata. “Here, there are more workers [than Thonglor] since there are a lot of large office buildings within walking distance. I can’t think of any other location that has such a unique mix of Thais and expats,” he says.

The Commons Saladaeng is a natural progression from its big brother in Thonglor. It follows the same signature step-and-ramp space that forms the backbone of The Commons Thonglor, albeit with a twist.

“We concentrated on designing an architectural ground that can adapt itself to different activities. We designed a ‘wood pallet’ system that can manipulate the steps into many configurations suitable for various functions,” says Amata.

In drawing up a unique identity for The Commons Saladaeng, Department of Architecture paid tribute to the area’s mythos. Cresting and falling atop the structure are eight red gables, alluding to the name of the neighbourhood—Sala is “pavilion” in Thai parlance; daeng is “red”—and the interesting history behind it. Saladaeng, the design team discovered, was a depot serviced by Paknam, Thailand’s first railway line which once ran through the area.

Saladaeng Station, as well as its surrounding residences, sported red gable roofs that the architects sought to replicate over the mall.

“We wanted the gable roof to be small and reminiscent of the old days. However, we also required a large span of building structure to accommodate the contemporary use of commercial space,” Amata says.

With the help of a structural engineer, the team reconciled such duelling challenges by imagining the roof as a sequence of ‘M’ shapes, steeply deviating from the typical pitch of gable roofs.

“The contractor manufactured these steel, M-shaped roof structural members in a factory and raised them up with a crane on-site. Precision was key,” recalls Amata.

In their search for the perfect roofing material, the architects discovered Onduline, a brand of corrugated roof sheets known for its excellent colour retention properties.

“Its ‘red’ is a good crimson shade that is not too saturated. It has a corrugated scale similar to the traditional asbestos cement roof used widely in the old days, and they convey a homey and domestic feel for such a large structure,” says Amata.

The Onduline sheets, made from rubber, cancels out the noise of heavy downpours. They also clad the interior walls and ceilings, the muted colours offering an unobtrusive background for the booths at The Market—the double-height food court on the second floor.

The Onduline sheets, made from rubber, cancels out the noise of heavy downpours. They also clad the interior walls and ceilings, the muted colours offering an unobtrusive background for the booths at The Market—the double-height food court on the second floor.

With the second Commons, Department of Architecture managed to recreate history and preserve decades’ worth of reclamation by nature. An enormous sai or pointed leaf ficus tree towers 16 metres over the plot, informing the project’s setback specifications.

“Existing large trees are important to any inner-city development. We knew instantly that it would be a focal point of our planning, so the façade is deliberately curved out from its beautiful canopy shape,” says Amata.

Department of Architecture commissioned a horticulturist, who checked the tree’s root sizes and their locations, the size of its canopy, etc., and from there determined how far the studio needed to set back the building, and how to protect the tree during construction.

After two and a half years of development, The Commons Saladaeng initially launched in January. Now open for business from 7am through 1am, the mall’s tenants include notables such as fried-chicken specialist Fowlmouth, artisanal burger joint Bun Meat and Cheese and, on the ground floor, a branch of Roast.

Customers can opt to eat anywhere. Upon ordering food at The Market, they can eat and drink at the available tables, downstairs at the Roots coffee counter or on the daybeds facing the street sidewalk. Amata himself enjoys a cup of coffee and croissant on the front step before coming to work.

The Platform, on the third and final level of the building, is another option with its lawn area offering plenty of communal seating and lush softscapes. There’s an elevator to the third storey, but customers “always enjoy walking up,” observes Amata. “On Saturday evenings, I watch jazz sessions performed by experienced and passionate Thai musicians.”

Operations at both Commons trade in sustainability, mainly because the open-air spaces—supplemented by big industrial fans—ensure free flow of ventilation and reduce clamour for conditioned air. Excess food from mall vendors are collected in a community fridge and later donated to the hungry.

We needed this little brother to be different, while also carrying the soul of its big brother. We needed to find the right balance between continuing the brand and progressive thinking

Universal design features, such as wheelchair access and handicap restrooms, are integrated into the built space, as are valet and bicycle parking areas. Customers may opt to leave their pets while browsing the shops, their leashes secured to special hooks on ground level.

“Frankly speaking, I was quite concerned when we were starting the design phase, because The Commons Thonglor was regarded really well by local and international design communities and the general public. We needed this little brother to be different, while also carrying the soul of its big brother. We needed to find the right balance between continuing the brand and progressive thinking,” he says.