The scene of some of the most epochal moments in Myanmar’s history, the Secretariat in Yangon has been reimagined as a mixed-use site that combines reverence for the past with a focus on the future

As a student in the late 1980s, U Myo Min Win often wondered what lay inside the ornate Victorian and Edwardian brick buildings across the road from his campus in Yangon.

“We saw the Secretariat building every day,” he recalls. “We would try entering the compound, but the government did not allow it at the time.”

Now the project director of Anawmar Art Group—the company spearheading the restoration and redevelopment of the Secretariat—U Myo Min Win is perhaps more familiar with the building than anyone.

He’s as aware of its architectural glory as he is of some of the epochal moments that have peppered its history.

“Many people still don’t know the exact spot where the general was assassinated, but we’ve known since 2016,” he says, referring to Burmese politician Gen. Aung San, the martyred father of present State Counsellor Aung San Suu Kyi. He was slain in 1947 along with eight others in the Secretariat in a murder orchestrated by political opponents.

Now adapted for reuse as a mixed-use site, the building offers office, retail, and event and exhibition facilities in spaces that once bore witness to seminal events in Myanmar’s history.

It joins The Pegu Club and The Strand Hotel among the recent spate of colonial-era buildings in Yangon that have been privatised and afforded a 21st-century sheen.

Completed in 1905, the Secretariat was the administrative seat of British Burma. In 1948, it was the place that the British handed over independence to Burma, as Myanmar was formerly known. Subsequently, it housed various government departments.

The transfer of the capital from Yangon to Naypyidaw in 2005 left the Secretariat deserted and ripe for redevelopment. Anawmar Art Group stood out among 10 companies that submitted conservation proposals to the Myanmar Investment Commission in 2012. By 2015, the Group had won 50-year leasing rights to the building from the Yangon Regional Government.

“There were foreign and local companies tendering for this building, but we exactly followed the conservation management plan from the regional government,” U Myo Min Win says.

With an estimated project outlay of USD35m, Anawmar Art Group plans to recover its investment through a carefully curated tenant mix. Also appealing is the work done on the project by Singapore-based architecture practice, Pomeroy Studio, which has—in the words of U Myo Min Win—combined British colonial design and local culture.

“We wanted to celebrate, and give respect to, a structure that has a story to tell, that is, colonialism and independence,” says Jason Pomeroy, principal of Pomeroy Studio.

That the Secretariat survived years of natural calamities, even wartime bombing, attests to the genius of its original architect, Henry Hoyne Fox. The structure’s longevity owes in part to the enormous timber logs used to stabilise the soil underneath the building. The complex boasts loadbearing walls, supported by a steel tie-rod system in the south wing—the first one built—and a jack arch system in the east and west wings, which followed 1903 onwards.

Clever masonry aside, Myanmar’s powerful seismic activities, coupled with sunken ground conditions onsite, have dealt structural challenges to the Secretariat. A 1930 earthquake toppled many of the complex’s crowning features, notably the classical brick dome over the south wing’s central tower. Along with six domed angle turrets in the southern terminal blocks, the dome once lent the complex a visually arresting roofline.

Instead of attempting to recreate the dome, Pomeroy advocated a different tack: reimagining the dome as a traditional Burmese parasol. Similarly, the government’s conservation management plan—drawn up for the non-profit Yangon Heritage Trust by Edinburgh conservation practice Simpson & Brown with Kolkata-based architecture firm Alleya and Associates—recommended instating a glazed dome similar to the Reichstag in Berlin.

The Secretariat roofscape, renowned for its signature tile finishing, was severely damaged by Cyclone Nargis in 2008.

“When I came to the project the northern range of the project was almost going to collapse,” says U Myo Min Win. “All the roofing was gone. Almost everything was gone. Building alignment and settlement were compromised.”

The conservation management plan’s guiding credo of minimum intervention resonated more with the interconnected southern, western and eastern ranges of the complex where the new Secretariat is almost faithful to the original.

Even after 130 years, the intact features of the Secretariat do not scrimp on a sense of arrival. The skylit cylindrical drum of the south wing’s central tower boasts a double grand stair of cast iron and teak with handrails that feature floral motifs.

The refurbished Secretariat reflects its British heritage with design flourishes that co-opt the 10 noble crafts of the Myanmar people. This blend of influences sprang, according to Pomeroy, from a desire to simultaneously honour Burma’s colonial past while maintaining a focus on a brighter future for Myanmar as an independent nation.

Today, the Secretariat’s main ranges have been repurposed as cultural showrooms, exhibition spaces, and art galleries. The building is also a budding shopping hub for Myanmar handicrafts, with vendors selling everything from lacquerware to jade baubles.

Sprawling for 16 acres, the Secretariat now holds sizable meeting rooms, ballrooms, and indoor and outdoor spaces for private functions, such as the U-shaped, landscaped inner courtyard. Just north of the quadrangle is the Parliament Building, built in 1923.

But it is in the west wing where the Secretariat shows its more transcendent aspects. Here, a Buddhist shrine stands in the Executive Council Room, where Gen. Aung San and his colleagues were gunned down. One can still see bullet holes in this room. Myanmar commemorates the tragedy in solemn Martyrs’ Day rites every year. 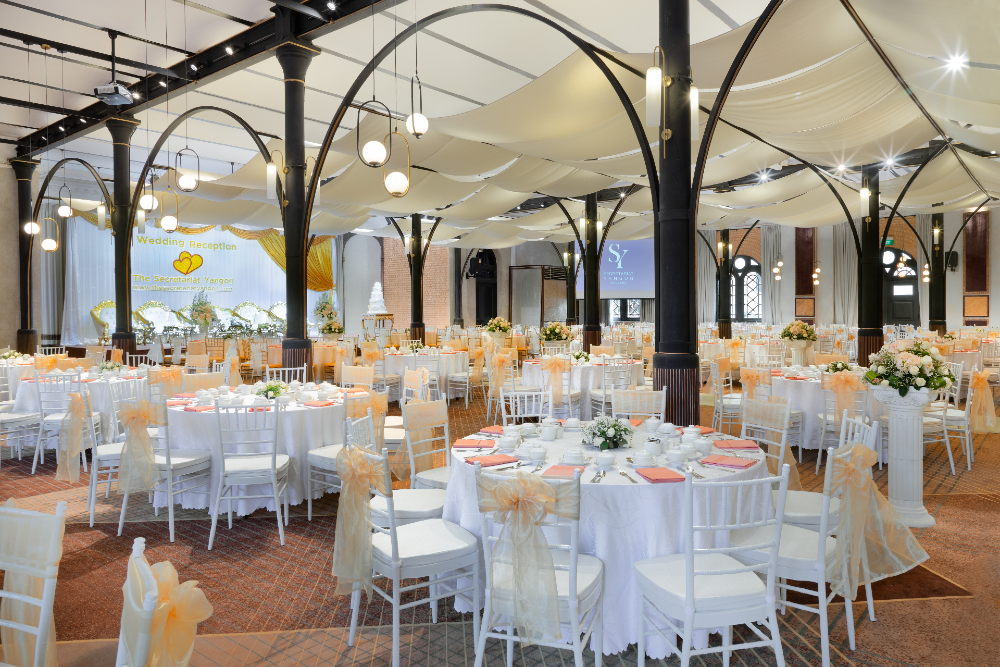 “The Secretariat building has the highest political value in this country,” says U Myo Min Win. “The British controlled our whole country from this building, and our leaders also tried to get independence from this building.”

The Secretariat project is far from finished. Although the current redevelopment phase will be completed in 2021, Anawmar Art Group still has half a century to rebuild and retrofit the complex. They will do so in concurrence with their next big project: a resurrection of Mandalay’s Royal Palace.

“We should keep any antique building—not just British colonial buildings,” concludes U Myo Min Win. “It’s important that they are preserved for the benefit of future generations.”

The original version of this article appeared in Issue No. 163 of PropertyGuru Property Report Magazine