Benoy has evolved from humble beginnings to become one of the leading lights in global architecture, with a significant and growing footprint in Asia

Benoy has had a profound and lasting impact in reshaping the fabric of cities throughout the world. Its impact belies its humble roots. The architecture and design firm started as a modest three-man operation when it was founded in 1947 in Nottinghamshire in England.

“Our founder joked that he started by designing cowsheds,” says Terence Seah, director and head of Hong Kong, Singapore, and Shenzhen at Benoy with a laugh. “We always joke that we went from the farm to all these destinations.”

Significant works include Ferrari World Abu Dhabi and Elements Mall in Kowloon, Hong Kong. The latter was Benoy’s first foray into the Asian market and it was about as challenging as a retail element could be. The mall was part of a massive construction on an elevated podium engineered to transform Hong Kong.

“There are 21 towers. There’s the airport express line. There’s the MTR,” says Seah. “If you think of the most complicated compilation of urban infrastructure, that’s it. It’s like New York’s Penn Station.”

More ambitious projects—including ION Orchard in Singapore—kept pouring in from the East. Eventually, the firm expanded its footprint in the region. Today, Benoy is well and truly embedded in Asia with 10 offices in cities including Singapore, Shanghai, Beijing, Shenzhen, and Hong Kong. By taking a holistic approach to master planning, the firm quickly built up a reputation within the region.

“We always manage to create a cocktail that is very popular,” Seah says. “[Our projects] tend to become true destinations. People keep coming back because they serve a complex layering of needs. Whether it’s housing or working or hospitality, when you consider how they interrelate with each other, it creates a larger whole.”

Part of looking at the larger whole means evaluating the impact a project can have from an ethical standpoint.

“We approach design through three tenets: social, economic and environmental,” says Seah. “We tend to focus on the social aspect. A lot of our projects are mixed-use and in densely populated urban areas. We have to be able to find the synergy between different facets of customers or people visiting our developments.”

For instance, SookSiam, a stunning dining development within the ICONSIAM shopping complex in Bangkok, mimics a Thai floating market and features work by more than 200 Thai artists and artisans.

The space creates a viable way for hawkers from all regions of Thailand to make a living and showcases a contemporary social space that promotes various elements of regional Thai culture. When domestic travel was curtailed due to the global pandemic, the attraction drew Bangkokians in droves to sample much-missed regional dishes from around the country.

“[Our projects] tend to become true destinations. They serve a complex layering of needs. Whether it’s housing or working or hospitality, when you consider how they interrelate with each other, it creates a larger whole”

“We also used the vernacular of the floating market,” Seah says. “I think a lot of people underestimate that retail is also a form of architectural vernacular. When you go to old villages and old cities, you see how little businesses activate the fact to engage with customers.”

Seah and his colleagues often draw inspiration from local architectural traditions, not only because it grounds a project with a sense of place, but also because it often makes environmental sense. For instance, Benoy has designed several projects in Dubai, a city renowned for both its scorching temperatures and energy-guzzling, air-conditioned shopping malls.

To reduce the carbon footprint of its retail spaces, Benoy turned to passive cooling strategies, including strategic shading and natural ventilation, to keep the public spaces cool with minimal use of fossil fuels.

While some of the technology the firm uses is new, much of it draws on how people in the Middle East maintained a comfortable ambient temperature for generations before the invention of electricity. The design also considers that days in Dubai traditionally get going in the afternoon and pick up after the sun goes down.

“In the Middle East, you design according to people’s habits,” says Seah. “There are some lessons to how people live and how they’ve adapted to different environments. Modern designers could learn a lot from that and tailor our design.”

In many ways, one could say that Benoy is a firm looking towards the future yet grounded in the lessons and wisdom of the past. Developers in urban areas in Asia Pacific often rush to embrace the new, rather than draw on the immense cultural depth at their disposal.

“We think it’s a more democratic way to work with city planning by incorporating traditional elements in a modern way,” says Seah.

The result is design for people that feels both contemporary and timeless.

Situated on the island of Hainan, this shopping complex needed to seamlessly integrate indoor and outdoor spaces, all the while maintaining a comfortable temperature with maximum energy efficiency. “Only one little portion, maybe 3% of everything, is air-conditioned,” Seah says with pride. To keep things cool, he turned to local tradition. “What we did was to look at the weather as well as how people used to live there. They have their vernacular of architecture, which is quite like ones you find in Southeast Asia.” He also looked at the surrounding coastal environment. “The concept was a series of seashells. The top-level was slightly elevated to give that sense of space and movement all around.” 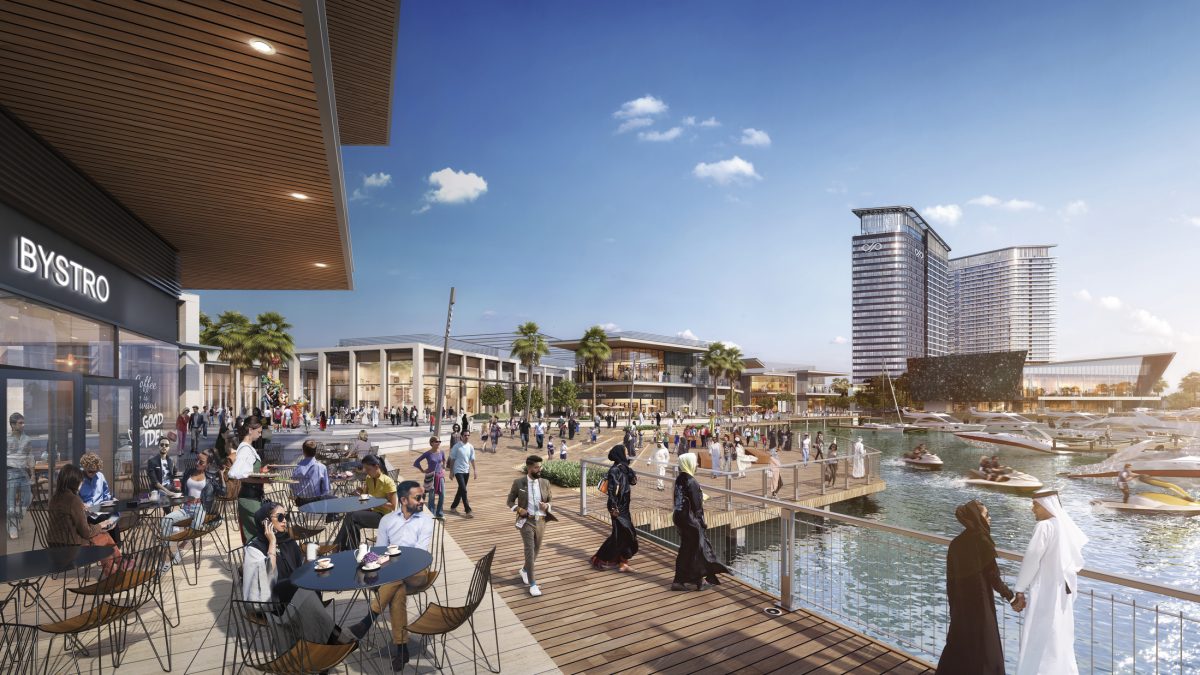 Located near the waterfront, this masterplan encompassing a mix of hospitality and residential offerings presented several challenges. “We created multiple layers because we wanted to be in the great outdoors and near the water, so we wanted to embrace the outdoors and the sun, ‘’ he says. “So there’s a ring and then a second ring, which is a grand arcade, which has a lot of strong shading lines. In a sense, it’s a little like a modern souk, but quite airy and filled with light. Unlike a souk where you might get lost inside, some views orient your circulation pattern.” 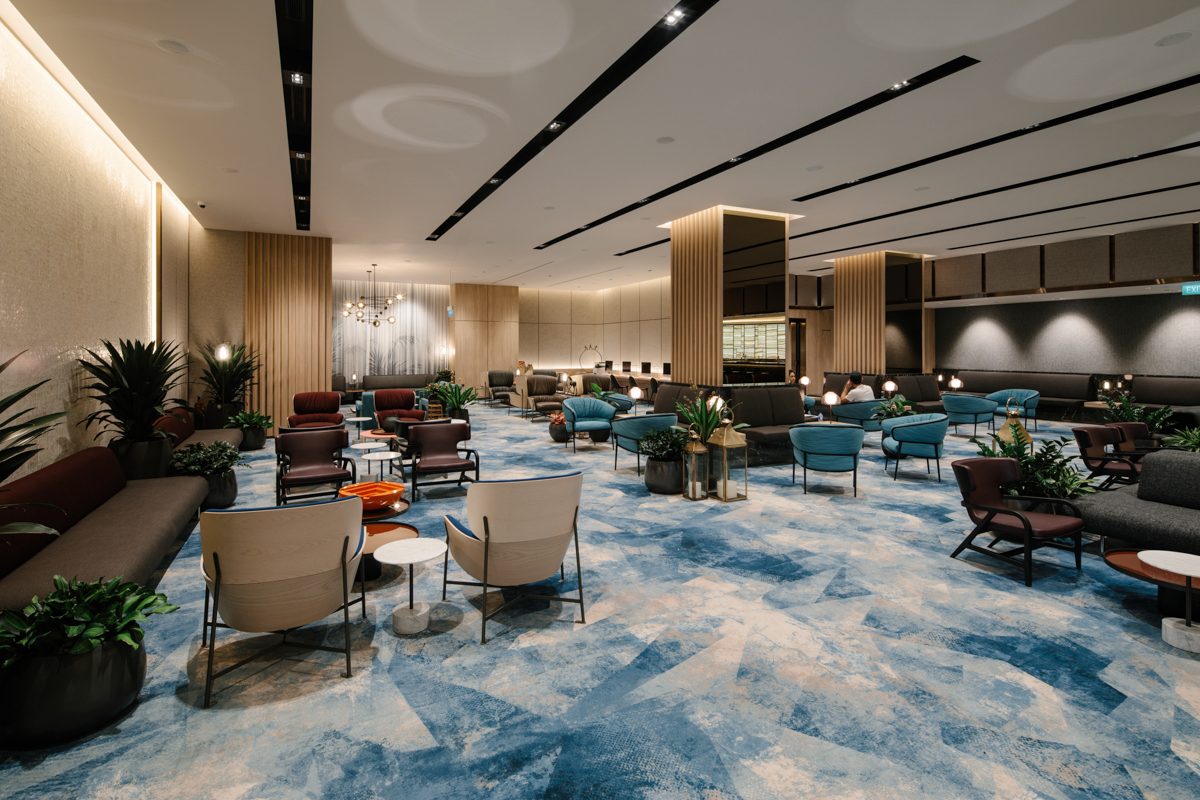 “In most destinations, when you talk about the airport, no one wants to go there,” Seah says. From the beginning, he envisioned helping to transform Changi International Airport into an attraction. “It’s also about the unique position of Singapore as a hub in attracting travellers to transit. Many times, we were talking to the client and the concept was a gateway. There was this great garden of Eden concept. If you’ve experienced arriving at Changi at Terminal 1, you just take five minutes and walk into the Forest Valley. It’s a very magical experience. The journey of a passenger transforming into a tourist should be seamless.” 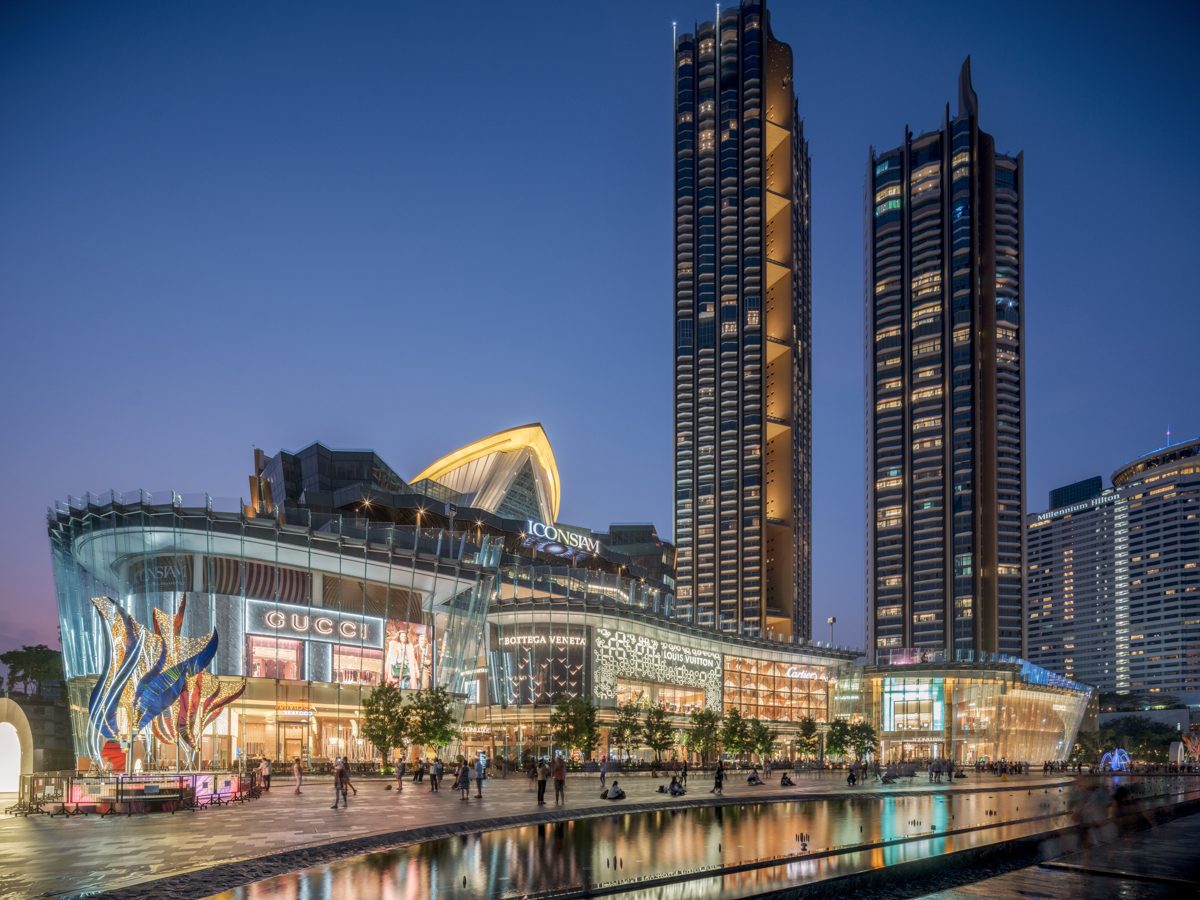 The challenge of this project was two-fold: how to make a luxury shopping centre stand out in Bangkok, a city already packed with high-end retail options, and how to draw Thais to the western bank of the Chao Phraya River, away from the main city centre. “In many ways, the client was very visionary. They want to do something that captures the imagination of the Thai people, as well as the tourists,” Seah says. The design itself is “a compilation of Thai motifs based on a krathong (a small floating container fashioned of leaves) and the shape of the lotus flower. It was also about separating the vertical zones into distinct experiences so that you don’t feel fatigued going between seven layers.”

More: The Spectacle by MGM Cotai: a record-breaking feat in architecture and design 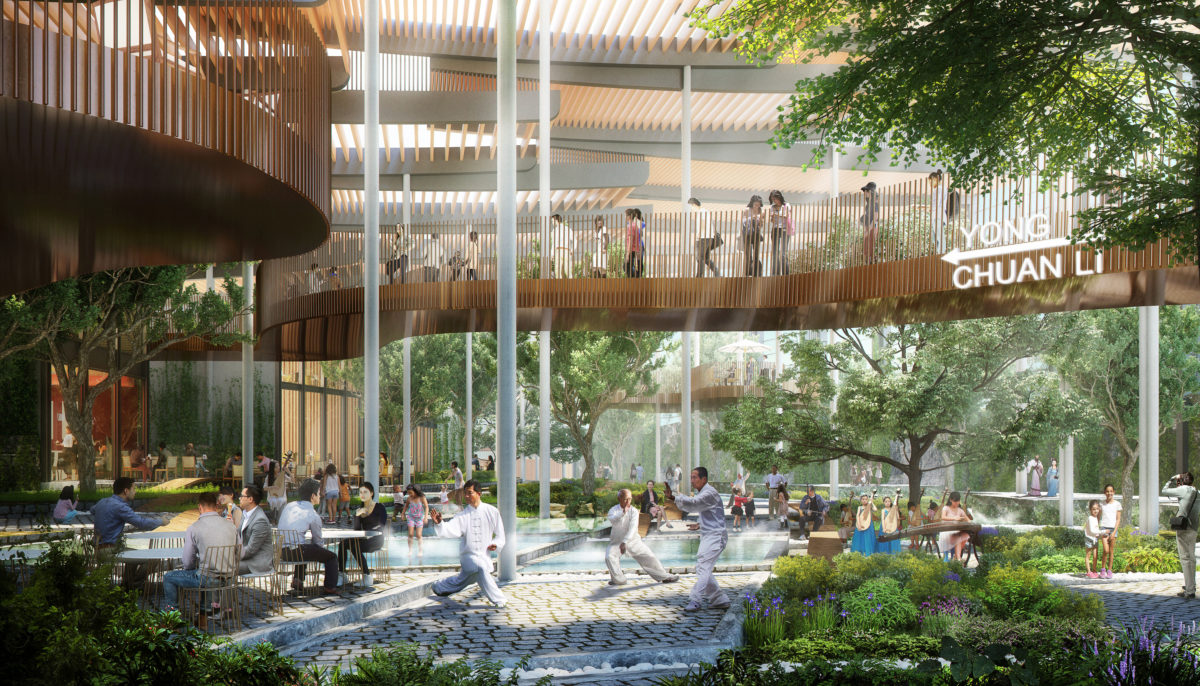 When Benoy first took on this project, half of the work had already been completed, but the overall design wasn’t working. The previous developer had planned for vast plazas in the middle of structures—a common architectural trope in this part of China, but one that often resulted in stagnant, windswept spaces. “We could have torn it all down, but we wanted to find ways to reintegrate this,” Seah says. “It creates something else: a culture.” To inject life into the project, he turned to locals for inspiration. “In many parts of Asia, street life is what animates public social life, so we thought it was better to insert this energy into that form of the plaza.” 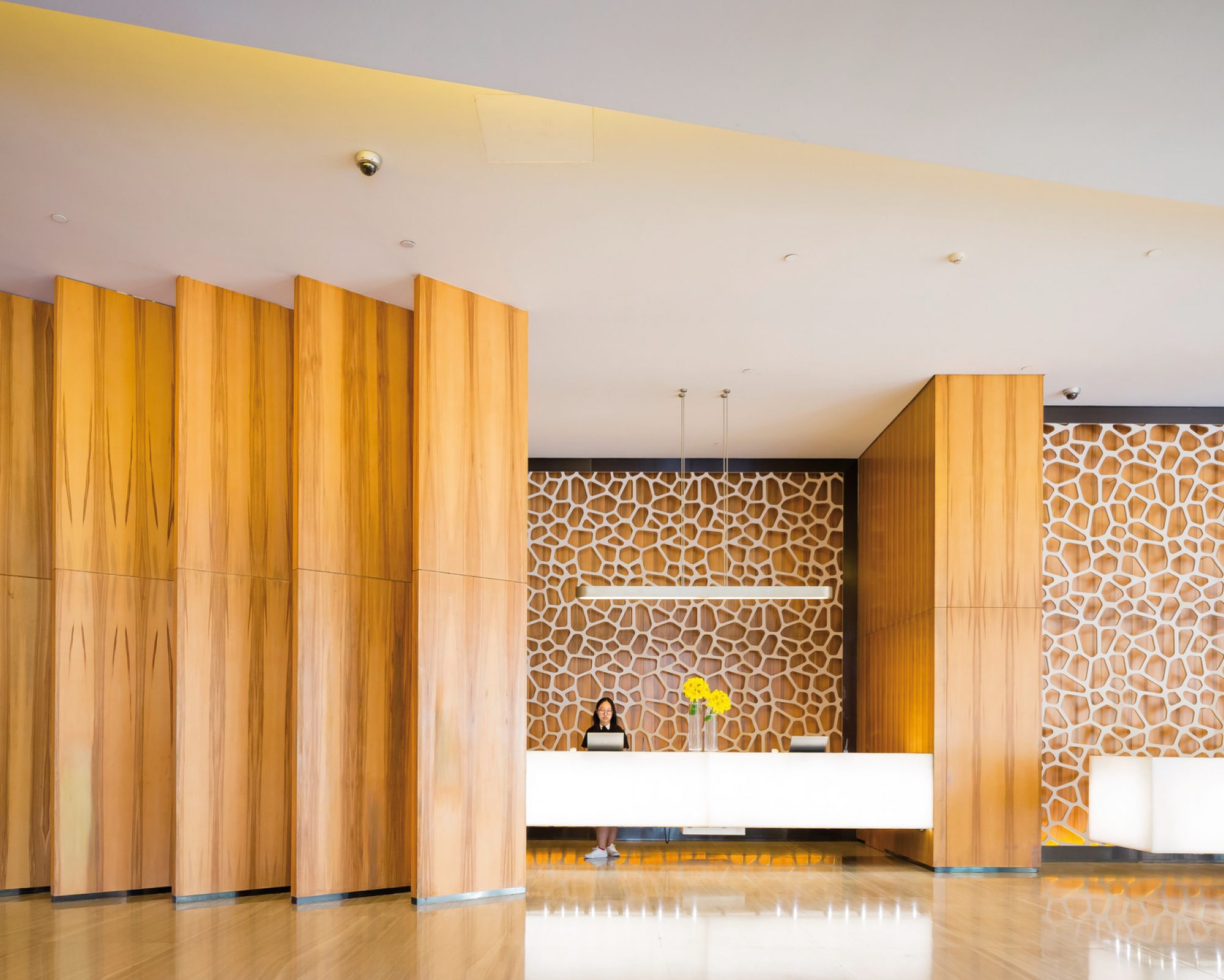 Located near the heart of 798, Beijing’s legendary Art District, this buzzy hotel draws a creative clientele. “I heard from a friend that every time she stays there, she sees Ai Weiwei,” Seah says. Naturally, the hotel’s design reflects its surroundings. “Because the hotel was very close to the art quarters, we wanted to work with a series of themes that worked with the area. This client is a very enlightened client who is committed to engaging with local artists.” That means playful design features pops of colour and original works by local artists. “More importantly, it was about understanding how people move in the whole development and the whole city.”